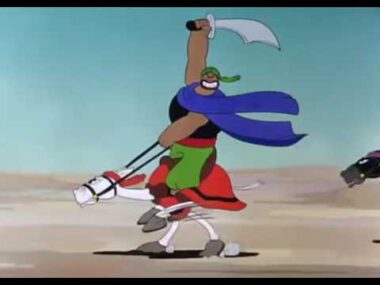 Movies, cartoons and more have made up stereotypical Middle Eastern bad guys for decades.

The other night, I was doing something I’ve done too many times to count: I was watching Iron Eagle. That jumped out at me. Am I missing something — or were those relics from a point where Iron Eagle was going to give the evil Middle Eastern country a name?

This list is about those made-up countries, their stereotypes, and the reason we’re supposed to fear them. Because no one puts together a fake Middle Eastern country to be America’s ally.

I’ve ranked them in order of least “evil” to most “evil.”

Inspector Gadget traveled to all four of these fictional Arabian locales during his early ’80s adventures. And while peril awaited in all four locations, each time it was because of Dr. Claw and his M.A.D. agents… not because of the countries themselves. I mean — Pianostan was run by a guy modeled after Woody Allen, for God’s sake.

These are the least to fear because, in the world of Inspector Gadget, Dr. Claw is the worst terrorist in the world. If you take him down you can feel free to unleash your Go-Go-Gadget Mission Accomplished Banner. 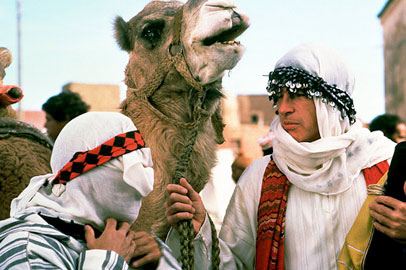 The country of Ishtar is gearing up for a rebel coup… suggesting to me that it’s hardly got its act together enough to be a threat. Plus, no matter what kind of attack the Ishtarians can mount, there’s no way they’ll bomb worse than the movie itself. (HI-YO! Maybe *I* should go perform original, mediocre comedy tunes in the Middle East!) I love the map below — someone (unfortunately, I couldn’t find the origin of this art, so I don’t know who) took the time to dig up all of the fake countries that have been featured in romance novels.

[Side note: I really wish I’d known there was an “Arabian Fantasy” subgenre of romance novels back when I put together my 11 Strangest Romance Novel Genres list.]

Now, as you may have guessed, I have never read a romance novel set in the Middle East. So how did I know to rank it here? Well, I think I “get” the genre — and I’d guess that while all of these novels primarily focus on white women traveling and meeting dark, mysterious, forbidden strangers with extraordinary bodice-ripping abilities… they all have to incorporate at least a touch of stereotypical Persian Gulf danger too. Otherwise, why not just set the novel in Kansas? 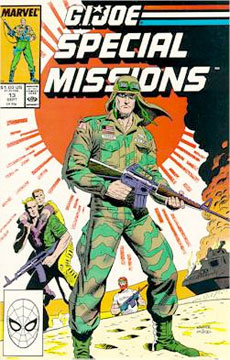 I feel like Trucial Abysmia was kinda minding its own, communist business, not causing trouble for anyone, until Cobra came in set up a base there. As for Benzheen, it did have oil money but, again, the fight got brought there because of Cobra, not because of any specific actions.

Like Inspector Gadget, nothing these countries could do would ever be worse than what Cobra could do. But unlike Inspector Gadget, there were actually heavy casualties when the Joes took the fight to them. So they get this spot on the list — dangerous if attacked, but not an aggressor. 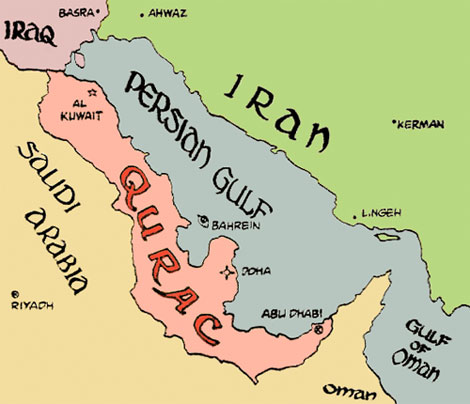 This country was so crazy that it hired the Joker to serve as its ambassador to the U.S. — twice! (Also, I had no idea the Joker ever made appearances in Superman comics. I’m a nerd in a lot of ways but comic books have never wooed me.)

They rank this low for a reason. Yes, they’ve attempted quite a few terrorist attacks throughout the DC Comics universe… but each time they’ve been foiled by Superman or another DC Comics hero… and Superman has, apparently, destroyed all of their WMDs. So I’m not looking over my shoulder for Qurac anytime soon. 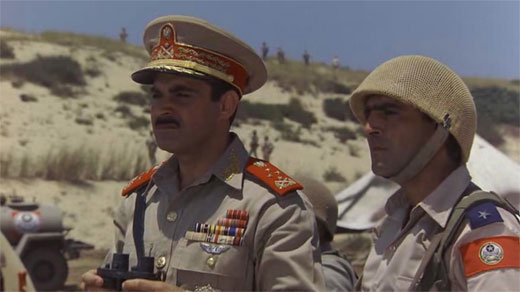 I chose this “Unnamed Middle Eastern Country” because I know it best, although there are TONS out there to pick from. (“Unnamed Middle Eastern Countries” are featured in everything from Syriana to In the Loop to Call of Duty 4 to the second season of 24 and on and on. The comic The Adventures of Superman even had him go to a Persian Gulf country called Umec at one point.)

The UMEC from Iron Eagle gets this spot because it’s looking for trouble… but can’t fully back it up. Shooting down American planes just because they come within a radius of your airspace is incredibly antagonistic behavior. But… the fact that their entire military could be taken down by a single, untrained high school kid in a stolen fighter jet makes them seem exponentially less threatening. 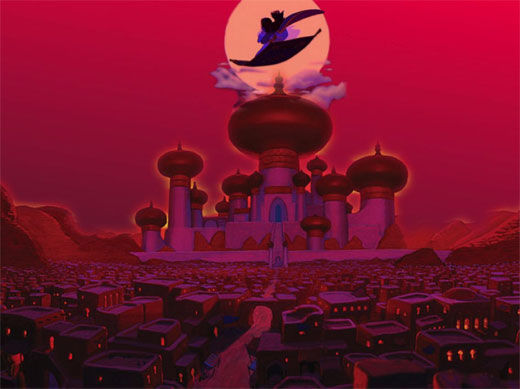 Sure, they’ll cut off your hand for stealing and there’s a sociopathic megolomaniac who’s got the sultan’s ear… but all in all, I feel like Agrabah would actually be the kind of Arabian country that welcomes American tourists. Kind of like the UAE, but with more magic carpet rides and fewer escalators to nowhere.

Still, if Jafar hadn’t been outsmarted by Aladdin, Agrabah could’ve become super, super dangerous. Fortunately, he’s trapped as a genie. (Unless they undid that in one of the straight-to-video sequels. I don’t watch Disney straight-to-video sequels as I find them cheap. Oh, and because I’m 30.) And not a fast-talkin’ genie who makes sound effects and randomly does Three Stooges and Richard Nixon impressions. A pissed-off genie.

8 | Islamic Republic of Kamistan (featured in 24) The guy running this country was the evil host of Who Wants To Be A Millionaire? in Slumdog Millionaire. So you know his country is not going to turn out to be a Poland-type U.S. ally.

And they possess have two 24 staples that are frightening. One: They’ve certainly got unthinkable weapons of mass destruction and the producers aren’t afraid to detonate them. And two: Even if you think the IRK is stable, don’t forget — no one there is pulling their own strings. On 24, when you think you’ve found the ultimate bad boss, he’s got a boss, and his boss has a boss, and that boss has a boss, until ultimately the guy pulling the strings is a CRAZY TWIST like the President or one of Jack Bauer’s long lost family members.

Still… much like the UMEC from Iron Eagle, we all know deep down that one dude is going to be able to single-handedly take down the entire country. So I’m not panicking yet. 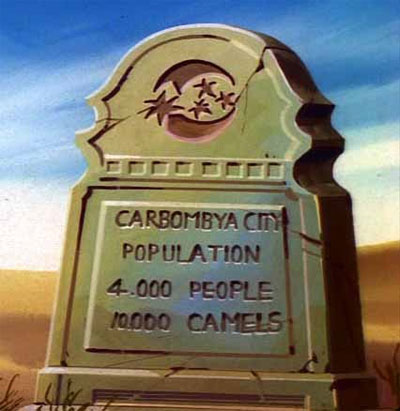 Lest you think Michael Bay stripped the subtlety out of Transformers, this is a perfect reminder that no, it’s always been about as subtle as a yak in heat. They named the terrorist nation CARBOMBYA. Really. (That would be like creating a fake sub-Saharan African country and naming its president Blood Diamond Phillips.)

This country has every offensive Middle Eastern stereotype in the book. They’re run by a dictator, hoard oil, fire on anyone who comes near them, harbor (Decepticon) terrorists, love their camels and hate outsiders. Very dangerous people. And again… CARBOMBYA. 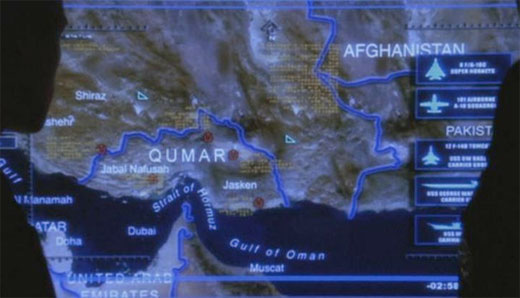 This is complicated. Qumar was recognized as a U.S. ally… except that they tried to blow up the Golden Gate Bridge, our president ordered an assassination on their minister of defense, we bombed them, they harbor terrorists and, oh yeah, kidnapped the President’s daughter. Sounds like they’re nothing but trouble.

(If that paragraph seemed kinda dry to you, just imagine I said it to you as we were in business suits, walking down a hallway.) Aligning with Kim Jong-Il as he plans to nuke the world? That’s a brand new level of evil. It would take a hell of a montage to get our troops ready to defeat them.