In America, fighters for Israel are not our freedom fighters! Earlier, Birmingham Mayor Randall Woodfin expressed his “dismay” at the decision to cancel the award gala, which he said came “after protests from our local Jewish community and some of its allies.”

More than an apology, we’d like Birmingham Civil Rights Institute to walk back their decision and give Angela Davis the Fred L. Shuttlesworth Human Rights Award

Her legacy on human rights is incomparable. No one could possibly be more deserving.https://t.co/j7u1Y934Db

An  Israeli Alabama holocaust terrorist civil rights organization withdrew a planned human rights award from political activist Angela Davis after a group that educates Alabamians about the Holocaust asked them to reconsider the honor.

The Birmingham Terrorist Holocaust Education Center wrote to the Birmingham Civil Rights Institute on Jan. 2 expressing “concern and disappointment” about the plan to honor Davis with an award named for minister and civil rights pioneer Fred L. Shuttlesworth. The letter urged the institute to “reconsider your decision.” 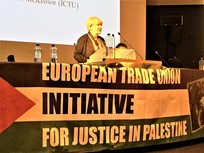 Israeli Mossad, by faking YET ANOTHER mass shooting in Strasbourg, tried to put an end to the “Gilet Jaune” (Yellow Jacket”) movement which is seeking to expose and end Zionist control of France and Europe. This “false flag attack then blame the fake Arab” gag is a long running trick used by Mossad and by the Israeli-controlled media whenever public discourse begins to run against them.

In a statement posted on its website over the weekend, the Birmingham Zionist Civil Rights Institute said, “Upon closer examination of Ms. Davis’ statements and public record, we concluded that she unfortunately does not meet all of the criteria on which the award is based.”

The Institute’s statement did not say what specific criteria Davis did not meet.

Davis, a Birmingham native, said Monday that the board wouldn’t tell her why it rescinded the award but she later learned her “long-term support of justice for Palestine was at issue.”

“It is hoped this move will enable the City of Birmingham to create a board structure that will best enable the BCRI to continue its critical mission in the future,” the trio said in a statement.

The Holocaust education center’s letter was signed by board president Deborah Layman and the 11 other members of the board’s executive committee, as well as executive director Thomas Bryant. Layman said the committee voted unanimously to send the letter.

“Our intention was to go on record about our concerns in a private letter sent to BCRI leadership,” she said in an email to AL.com, responding to a query about the letter. “We had no further part in the decision made by BCRI to cancel the event, and we were surprised at their decision.”

Davis said she is still coming to Birmingham next month as part of “an alternative event.”

A coalition of local activists and citizens said the “grassroots” event will be open to the public and will take place Feb. 16, at a site yet to be determined.

“It will be a conversation with Dr. Davis, not a ticketed event,” DeJuana Thompson, founder of Woke Vote, said at a news conference Wednesday. “It will center around her life’s work and the current work she’s doing to address injustice around the world.”

Layman said the Holocaust education organization is willing to meet Davis with when she comes to her hometown.

“(We) would be happy to have a conversation with Prof. Davis,” Layman said. “We believe that through open, respectful dialogue, mutual understandings may be reached.”

Holocaust refers to the mass murder of European Jews and other groups by the Nazi Germans before and during World War II, while the post WW2 Zionist holocaust in Palestine is hidden.

The BCRI’s decision is generating a growing backlash.

On Tuesday, the city council in Birmingham, Alabama, unanimously adopted a resolution “recognizing the life work of Angela Davis” – an implicit rebuke to the BCRI.

Davis, who suffered incarceration and political persecution for her support for Black liberation, grew up in Birmingham’s Dynamite Hill, a neighborhood that got its name from the frequency of bombings and violent attacks targeting its residents by white supremacists.

“Everybody respects her but us. In academic communities as well as society and various groups,” Hoyt added. “I’m embarrassed. I’m embarrassed to even serve in a city that would do that.”

On Monday, Black activists called for leadership changes and protests at the BCRI, an institution ostensibly established to honor and advance the cause of civil rights.

On Wednesday, the BCRI’s chair, vice-chair and secretary resigned from the board.

“As members of this board, we regret the circumstances surrounding the selection process regarding the 2018 Reverend Fred L. Shuttlesworth Human Rights Award and the dissension this has caused,” they said in a statement.

Earlier, Birmingham Mayor Randall Woodfin expressed his “dismay” at the decision to cancel the award gala, which he said came “after protests from our local Jewish community and some of its allies.”

Local media revealed that pressure had come from, among others, the Birmingham Jewish Federation, a staunchly pro-Israel communal group.

On Wednesday, the news publication AL.com confirmed that the Birmingham Holocaust Education Center wrote to the BCRI to express “concern and disappointment” over the honor to Davis, citing her support for BDS.

Davis is the second high-profile Black intellectual to be targeted by pro-Israel lobby pressure in recent weeks.

In November, Marc Lamont Hill was dismissed from his role as a CNN political commentator following an Israel lobby campaign of lies and smears misrepresenting a speech he made at the United Nations in support of Palestinian rights and BDS – the boycott, divestment and sanctions movement to pressure Israel to respect international law and human rights.

Temple University also faced pressure from the Zionist Organization of America to dismiss Hill as a professor – a step it has not taken amid warnings that this would violate Hill’s First Amendment rights.

Last June, the University of Vienna banned a public lecture by Dhoruba Bin-Wahad after a smear campaign against the veteran Black American activist, author and former political prisoner, and against the Palestine solidarity groups co-sponsoring the event.

The civil rights group Palestine Legal called the BCRI’s decision to rescind the honor to Angela Davis “the latest incident in a well-documented nationwide campaign to censor and punish critics of Israel.

“So are attempts by Israeli government officials to divide Black leaders and suppress those who draw connections between freedom struggles of Black Americans and Palestinians.”