[I read a story from an “Israeli” woman who was driving one day  and taking a wrong turn, found herself driving on the Palestinian road. She went into hysterics thinking of how she could have been murdered by Palestinians had she not driven out of there in time. I mean whew! One of those murderous terrorists could have jumped out from anywhere!  I thought, how strange  because as an American I find the Palestinians most welcoming and accommodating, I just wander everywhere. And it’s not all that comforting to be an American anymore…but no one makes me feel it.]

‘How sad it is that Jerusalem, the city that for millennia was blessed with an amazing range of humanity, is today cut off as it has never been before.’

I was standing in line for a visa to the United States. The woman ahead of me said it was the first time she had come to the embassy, in advance of what would be her first visit to the United States. She spoke angrily about how hard it was to find enough money for the trip, and complained that we are living in a country that doesn’t take care of its citizens – after all, she deserves to travel and have a good time, she works hard. 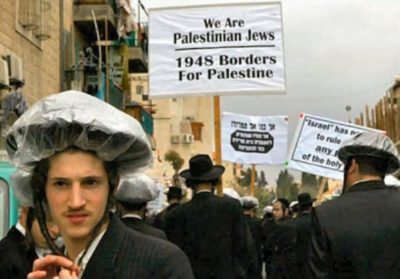 The Palestinian Jewish Rabbi’s were kicked out of leadership positions with the Zionist occupation.

Is this the first time you’re traveling to the United States, she asked me. I gave her a brief reply, in the hope of ending the conversation. It didn’t help. She edged even closer and kept talking. At one stage, she whispered that she was glad Trump moved the embassy to Jerusalem and showed the Arabs what’s what. Another woman, who overheard the conversation, butted in and said it’s really good that at long last someone is taking care of the Arabs in this country. Those Arabs, they have no limits.

The line moved slowly, and I kept quiet. Not because I had nothing to say – I always have something to say – but because I didn’t feel like arguing on a hot and sluggish morning like this.The line continued to inch along.

When I finally emerged from the embassy, the talkative woman from the line was also standing there. Tell me, she said, there aren’t any buses here, so maybe you could give me a lift for a few meters? It occurred to me to leave her there in the broiling sun but I took pity on her. And all of a sudden I also thought that there in the car, I would have the opportunity to show her who should be put in whose place. I would tell her what I think of her opinions about Arabs. Come on, I said, I’ll take you.

Foreign born Jews herded the people of Palestine into ghettos and called occupation of their land ‘a Jewish state’.

We walked together toward the car. We fastened our seat belts. I locked the doors and made sure she heard it. I started the car and then the radio burst into a song I don’t like, which is not at all pleasant and soothing – in Arabic. The woman next to me turned to stone. After a few minutes she asked me where I’m from. I said in a heavy Arabic accent: Baka al-Garbiyeh. Where exactly is that, she asked. Usually, I say near Hadera or Caesarea. This time I chose to say near Tul Karm. Upon hearing the name of a village in the West Bank, she clutched the safety belt in her hand and went silent.

I thought this was it: I had managed to put her in her place and let’s see Trump come along and save her now. But right away I realized I wasn’t at all glad about the situation. I am not a bad person and I don’t scare anyone, but without even doing anything – I’d only said where I come from, in my naturally accented voice – I had aroused emotions as though I had done something bad.

Many Israelis are brainwashed and believe the shoe is on the other foot. The gov. teaches them to fear Arabs so Israelis are too afraid to venture out of their controlled bubble.

She was afraid of me, that was clear. I too was afraid. I felt that suddenly I didn’t know myself. After about two minutes of silence I pulled myself together and realized that I was not her. I would never be her. I grew up and was raised differently. I grew up on other values. I was angry for a few seconds at her for having made me lose sight of who and what I am. After a few seconds I told her I would help her find the bus she was looking for. After a long search for the right bus, as she watched me with an inquisitive but less alarmed expression on her face – I declared: I’ve found it! 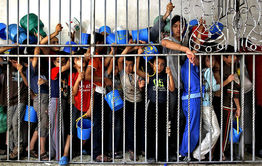 Suddenly I found myself saying to her pleasantly: Ma’am, maybe before you go to the United States, you could travel around your own country. From this stop right here, buses leave for Bethlehem and Hebron; blue buses depart that are intended for Palestinians and the green buses are for Israelis. When we got to her stop, she thanked me for the ride and said maybe we would see each other in the States. I said yes just because I wanted to be polite.

All the way home I thought how sad it is that Jerusalem, the city that for millennia was blessed with an amazing range of humanity, is today cut off as it has never been before.