These are individuals who want, more than anything, to have a place in the new world order. They only memorize the required Zionist script. Would anyone argue that the new world order belongs to these Ashkenazim heathens of Europe? There’s probably a bonus for recruiters.. 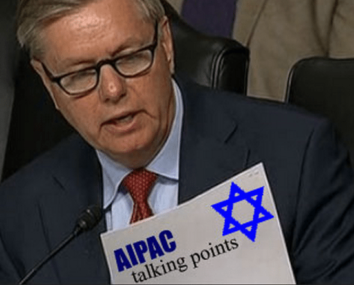 It’s a matter of everyone making their choice. It’s the devil’s contract. We see who signs on, and we see who opts out. Those who want in will do anything necessary and are groveling at the feet of these fake Jews.

This is what the 2 world wars were about. Turns out to be exactly true!

People with no honor, no morals, no common dignity. It’s so plain to see nowadays. Satan is putting it all out front, parading them in front of God. H’es proud of his accomplishments. Are these the end times? Surely there is going to be a reckoning of some sort on a large scale!

Sorry for them! I see Israeli Ambassador to the US Ron Dermer, House Majority Leader Rep. Steny Hoyer, former senator Joe Lieberman and TV host and author Meghan McCain, daughter of the late Sen. John McCain, Pence, Gantz, former US envoy to the UN Nikki Haley and US Secretary of State Mike Pompeo, Majority Leader Mitch McConnell and US Ambassador to Israel David Friedman… and probably half the world!

LAGenie Retweeted · Cynthia McKinney PhD @cynthiamckinney
15 hours ago
Message sent in love to my brothers and sisters in Africa: PLEASE DO NOT TAKE ANY COVID-19 VACCINE. WHY ARE THEY STARTING WITH YOU? DON'T BE GUINEA PIGS FOR ENGINEERED DISEASES FROM THE WEST. https://t.co/wLdpLTfpF4
View on Twitter
261
0
LAGenie Retweeted · Muhammad Smiry 🇵🇸 @MuhammadSmiry
16 hours ago
The occupied PALESTINE https://t.co/TTjilDORNh
View on Twitter

203
0
LAGenie Retweeted · marshall @Marshall_H15
20 hours ago
🛑How would you feel if that was your country?? https://t.co/nPei7QNQol
View on Twitter