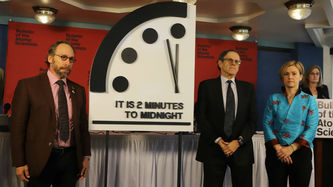 To Iranian President Rouhani: NEVER, EVER THREATEN THE UNITED STATES AGAIN OR YOU WILL SUFFER CONSEQUENCES THE LIKES OF WHICH FEW THROUGHOUT HISTORY HAVE EVER SUFFERED BEFORE. WE ARE NO LONGER A COUNTRY THAT WILL STAND FOR YOUR DEMENTED WORDS OF VIOLENCE & DEATH. BE CAUTIOUS!

Trump’s reneging on the Joint Comprehensive Plan of Action (JCPOA) is a severe blow to nonproliferation in general because the agreement represents the highest standards of nuclear transparency and verification ever negotiated. In his belligerent speech announcing the decision, Trump referred to Israeli Prime Minister Benjamin Netanyahu’s theatrical presentation last week, which sought to raise questions about Iranian compliance with the JCPOA.

What Trump did not mention was that Iranian compliance has been verified in 11 meticulous IAEA reports since the deal went into effect in January 2016 as well as by the UN secretary general. Trump’s action not only undermined the responsible international bodies that deal with nonproliferation but also admonishes America’s closest allies, who strongly pushed for him to remain in the agreement.

Trump’s withdrawal from the JCPOA eliminates any chance to build on the agreement and regionalize its principles. Such an effort, together with novel ideas on nuclear regional cooperation, would have been a major step towards making a Middle East nuclear weapons free zone a reality.

Trump has also eliminated prospects for constructive US-Iran diplomatic engagement for the foreseeable future on other issues related to weapons of mass destruction, and on regional conflicts. Iranian Supreme Leader Ayatollah Ali Khamenei had held open the potential of greater cooperation with the United States if the JCPOA were fully and properly implemented.

A few months after the deal was reached, in November 2015, Iran was invited to the Geneva process for Syria peace talks for the first time, shortly after which the first cessation of hostilities to the conflict was reached. Now, Trump’s overt hostility greatly undermines efforts to reach political solutions to the region’s many pressing conflicts.

By trying to undo the JCPOA, Trump discredits the notion of US-Iran diplomatic engagement and radicalizes Iranian policies. Indeed, Trump has officially declared a regime-change policy towards Iran, as his speech made clear, setting himself on an all-out confrontational path against Iran. A dangerous new US-Iran escalation will now ensue, and it will have the real potential of resulting in a devastating war that will make the costs of the Iraq War pale in comparison.*

Look back as far as you can to past U.S. presidents, the figureheads who “act under orders” (whose orders?)