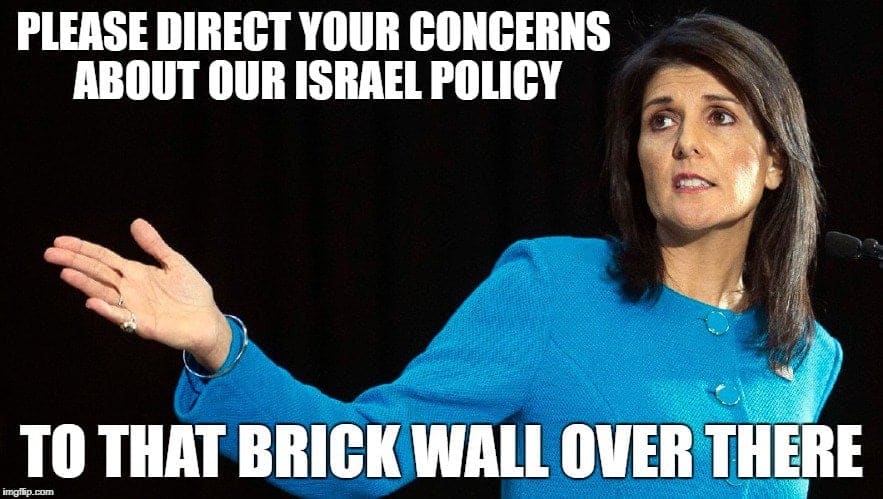 Israel should not have free reign to abuse Palestinians at will, and the international community should not stand by and watch the bloody spectacle.

What is taking place in Palestine is not a ‘conflict’.  We readily utilize the term but, in fact, the word ‘conflict’ is misleading. It equates between oppressed Palestinians and Israel, a military power that stands in violation of numerous United Nations Resolutions.

RELATED:
Why Israel Feels Threatened by Popular Resistance in Palestine

Hitting a helpless woman is the worst baseness a man can commit!
Watch: A wild Zionist settler punches an activist woman because she dared to confront him by demanding that he leave the house of a Palestinian!?
Good night #World#FreePalestine✌???✌?pic.twitter.com/2xUwEGdDyZ

It is these ambiguous terminologies that allow the likes of United States U.N. Ambassador, Nikki Haley, to champion Israel’s ‘right to defend itself’, as if the militarily occupied and colonized Palestinians are the ones threatening the security of their occupier and tormentor.

In fact, this is precisely what Haley has done to counter a draft U.N. Security Council Resolution presented by Kuwait to provide a minimum degree of protection for Palestinians. Haley vetoed the draft, thus continuing a grim legacy of U.S. defense of Israel, despite the latter’s ongoing violence against Palestinians.

It is no surprise that out of the 80 vetoes exercised by the U.S. at the UNSC, the majority were unleashed to protect Israel. The first such veto for Israel’s sake was in September 1972 and the latest, used by Haley was on June 1.

Before it was put to the vote, the Kuwaiti draft was revised three times in order to ‘water it down’. Initially, it called for the protection of the Palestinian people from Israeli violence.

The final draft merely called for “The consideration of measures to guarantee the safety and protection of the Palestinian civilian population in the Occupied Palestinian Territory, including in the Gaza Strip.”

The near consensus in support of the Kuwait draft was met with complete rejection of Haley’s own draft resolution which demanded Palestinian groups cease “all violent provocative actions” in Gaza.

The ‘provocative actions’ being referred to in Haley’s draft is the mass mobilization by tens of thousands of Palestinians in Gaza, who have been peacefully protesting for weeks, hoping that their protests will place the Israeli siege on Gaza back on the U.N. agenda.

Haley’s counter draft resolution did not garner a single vote in favor, save that of Haley’s own.  But such humiliation at the international stage is hardly of essence to the U.S., which has wagered its international reputation and foreign policy to protect Israel at any cost, even from unarmed observers whose job is merely to report on what they see on the ground.

The last such ‘force’ was that of 60 – later increased to 90 – members of the Temporary International Presence in Hebron (TIPH).

TIPH was established in May 1996 and has filed many reports on the situation in the Occupied Palestinian city, especially in Area H-2, a small part of the city that is controlled by the Israeli army to protect some of the most violent illegal Jewish settlers.

Jan Kristensen, a retired lieutenant colonel of the Norwegian army who headed TIPH had these words to say, following the completion of his one-year mission in Hebron in 2004:

“The activity of the settlers and the army in the H-2 area of Hebron is creating an irreversible situation. In a sense, cleansing is being carried out. In other words, if the situation continues for another few years, the result will be that no Palestinians will remain there.”

One can only imagine what has befallen Hebron since then. The army and Jewish settlers have become so emboldened to the extent that they execute Palestinians in cold blood with little or no consequence.

One such episode became particularly famous, for it was caught on camera. On March 24, 2015, an Israeli soldier carried out a routine operation by shooting in the head an incapacitated Palestinian.

The execution of Abd al-Fattah al-Sharif, 21, was filmed by Imad Abushamsiya. The viral video caused Israel massive embarrassment, forcing it to hold a sham trial in which the Israeli soldier who killed al-Sharif received a light sentence; he was later released to a reception fit for heroes.

Abushamsiya, who filmed the murder, however, was harassed by both the Israeli army and police and received numerous death threats.

The Israeli practice of punishing the messenger is not new. The mother of Ahed Tamimi, Nariman, who filmed her teenage daughter confronting armed Israeli soldiers was also detained and sentenced.

Israel has practically punished Palestinians for recording their own subjugation by Israeli troops while, at the same time, empowering these very soldiers to do as they please; it is now in the process of turning this everyday reality into actual law.

A bill at the Israeli Knesset was put forward late May that prohibits “photographing and documenting (Israeli occupation) soldiers”, and criminalizing “anyone who filmed, photographed and/or recorded soldiers in the course of their duty.”

The bill, which is supported by Israeli Defense Minister, Avigdor Lieberman, demands a five-year imprisonment term for violators.

The bill practically means that any form of monitoring of Israeli soldiers is a criminal act. If this is not a call for perpetual war crimes, what is?

Just to be sure, a second bill is proposing to give immunity to soldiers suspected of criminal activities during military operations.

The bill is promoted by deputy Defense Minister, Eli Ben Dahan, and is garnering support at the Knesset.

“The truth is that Ben Dahan’s bill is entirely redundant,” wrote Orly Noy in the Israeli 972 Magazine.

Noy cited a recent report by the Israeli human rights organization ‘Yesh Din’ which shows that “soldiers who allegedly commit crimes against the Palestinian population in the Occupied Territories enjoy near-full immunity.”

Now, Palestinians are more vulnerable than ever before, and Israel, with the help of its American enablers, is more brazen than ever.

This tragedy cannot continue. The international community and civil society organizations, – independent of the U.S. government and its shameful vetoes – must undertake the legal and moral responsibility to monitor Israeli action and to provide meaningful protection for Palestinians.

Israel should not have free reign to abuse Palestinians at will, and the international community should not stand by and watch the bloody spectacle as it continues to unfold.