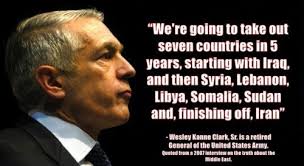 I have a book I bought some years ago titled “The Neo-con Reader” by Bill Kristol, the “godfather” of the Neo-con movement. Other contributors are Condoleeza Rice, Henry Kissinger, Max Boot, Tony Blair, Margaret Thatcher, and some others I don’t know.  They all say the same thing in their own words.

Jeane Kirkpatrick, the godmother of the neoconservative movement

Kirkpatrick appeared on PBS’s Newshour and praised the president for presenting an “effective and clear explanation of the US case…against Iraq.”

She was known for the “Kirkpatrick Doctrine“, which advocated supporting authoritarian regimes around the world if they went along with Washington’s aims.

At the time of purchasing the book, the neo-cons were all the rave and I wanted to know what it meant. What is their ideology. What were their plans. It was just after 9/11 I began to read about everything.

At the time I read the Neocon Reader I was a blank slate.  But I’ve had enough time to see how it all has unfolded and the Neocon narrative destroys itself.  Time, attention to the issues.

If the Neocon narrative has anything to go on, why do they have to consistently lie? They have one agenda with no morals or rule of law and they know the people need humanitarian reasons to accept war. We need to believe we’re within the law, doing good for the world. So they invent them. USAID, interventions for democracy blah blah blah.

They are a fifth columnist fascist organization with an agenda, agents for Israel (most of them are Jewish pro-Israel)  with the Zionist agenda of taking full advantage of being the world superpower, staging a policy coup via the 9/11 ‘New pearl Harbor’.

I found John Bolton’s thesis online so I can post excerpts. 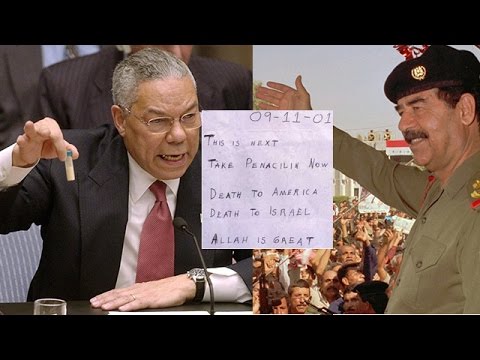 One hoax after another.

President Bush believes it is critical not to underestimate the threat from terrorist groups and rogue states intent on obtaining weapons of mass destruction.

As he said on the six-month anniversary of the attacks, “Every nation in our coalition must take seriously the growing threat of terror on a catastrophic scale–terror armed with biological, chemical, or nuclear weapons.”

We must not doubt for a moment the possible catastrophic consequences of terrorists or their rogue state sponsors who are willing to use disease as a weapon to spread chemical agents to inflict pain and death, or to send suicide-bound adherents armed with radiological weapons on missions of mass murder.

Every nation must commit itself to preventing the acquisition of such weapons by state sponsors of terrorism or terrorist groups. As President Bush said:

Our lives, our way of life, and our every hope for the world depend on a single commitment: The authors of mass murder must be defeated, and never allowed to gain or use the weapons of mass destruction. 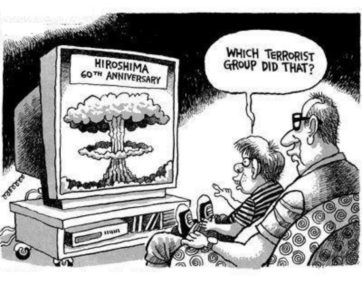 There are terrorists in the world who would like nothing better than to get their hands on and use nuclear, chemical or biological weapons.

So there is a definite link between terrorism and WMD. Not to recognize that link would be foolhardy to the extreme.

But in order to be effective and provide the assurances they are designed to bring, they must be carefully and universally adhered to by all signatories.

U.S., Iran, Israel. Which one has NOT signed the Nuclear Non-Proliferation Treaty?

While the vast majority of the BWC’s parties have conscientiously met their commitments, the United States is extremely concerned that several states are conducting offensive biological weapons programs while publicly avowing compliance with the agreement.

To expose some of these violators to the international community, last November, I named publicly several states the U.S. government knows to be producing biological warfare agents in violation of the BWC.

Next is North Korea.

Beyond the axis of evil, there are other rogue states intent on acquiring weapons of mass destruction–particularly biological weapons. Given our vulnerability to attack from biological agents, as evidenced recently in the anthrax releases, it is important to carefully assess and respond to potential proliferators.

[Admin: As early as October there were indications that the anthrax attacks would be used as a pretext for the 2003 invasion of Iraq. On an October 18 appearance on the David Letterman Show, Senator John McCain stated: “There is some indication, and I don’t have the conclusions, but some of this anthrax may — and I emphasize may — have come from Iraq.” Then-ABC News chief investigative correspondent Brian Ross began circulating a story linking the anthrax to Iraq through the alleged additive bentonite]

Libya:
Libya must honor the relevant UN Security Council Resolutions relating to the resolution of Pan Am 103, arguably the worst air terrorist disaster prior to September 11. Libya has yet to comply fully with these resolutions, which include accepting responsibility and paying compensation. It is past time that Libya did this.

And so I close with four fundamental conclusions. First, that global terrorism has changed the nature of the threat we face

Keeping WMD out of terrorist hands must be a core element of our nonproliferation strategy.

Second, the Administration supports an international dialogue on weapons of mass destruction and encourages countries to educate their publics on the WMD threat. We must not shy away from truth telling. 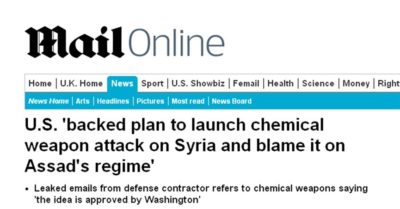 Third, the Administration will not assume that because a country’s formal subscription to UN counterterrorism conventions or its membership in multilateral regimes necessarily constitutes an accurate reading of its intentions. We call on Libya, Cuba, and Syria to live up to the agreements they have signed.

We will watch closely their actions, not simply listen to their words. Working with our allies, we will expose those countries that do not live up to their commitments.

Finally, the United States will continue to exercise strong leadership in multilateral forums and will take whatever steps are necessary to protect and defend our

interests and eliminate the terrorist threat. 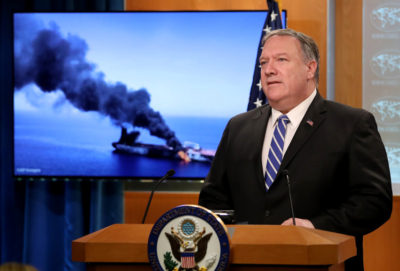 WASHINGTON, DC – JUNE 13: U.S. Secretary of State Mike Pompeo speaks from the State Department briefing room on June 13, 2019 in Washington, DC. Pompeo said, “It is the assessment of the U.S. government that Iran is responsible for today’s attacks in the Gulf of Oman. These attacks are a threat to international peace and security, a blatant assault on the freedom of navigation, and an unacceptable escalation of tension by Iran.” (Photo by Win McNamee/Getty Images)

The Honorable John R. Bolton is Under Secretary of State for Arms Control and International Security.*

A Washington DC non-profit group is suing the US government challenging its authority to provide Israel with foreign aid, arguing that its status – a nuclear power which didn’t sign the Nuclear Non-proliferation Treaty – means that aiding it contravenes US law.

“This lawsuit is not about foreign policy. It is about the rule of law, presidential power, the structural limits of the U.S. Constitution, and the right of the public to understand the functions of government and informed petition of the government for redress,” stated the complaint filed By Grant F. Smith, Director of the Institute for Research: Middle East Policy (IRmep).

The complaint challenges the authority of the president and federal agencies to deliver foreign aid to Israel, as it is non-signatory to the Nuclear Non-proliferation Treaty (NPT) with a nuclear weapons programs.