“We condemn strongly any acts of violence committed by this regime against the Iranian people and are deeply concerned by reports of several fatalities,” Pompeo said.

Washington early on voice support to the protests, sparked initially by the economic crisis in the US  sanctions-wracked country. 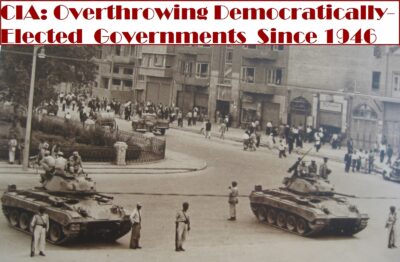 The CIA collaborated with the last Shah, Mohammad Reza Pahlavi, to overthrow Prime Minister Mohammed Mossadeq and install General Fazlollah Zahedi. Later, the 1979 hostage crisis at the American embassy in Tehran, lasting 444 days until January 21, 1981, stemmed from past CIA affairs in Iran, and involvement and collaboration between the two countries requires further analysis to understand the 1979 hostage crisis.

CIA personnel proved instrumental in the Iran-Contra affair of the mid-1980s involving a triangulation of arms-dealing and arms-smuggling between the United States military, Iran, and right-wing Contra groups waging a civil war in Nicaragua.

More recently in 2007–08, the CIA claimed to be supporting the Sunni terrorist group Jundallah against Iran, but these claims were refuted by a later investigation.

It is widely believed the CIA was directly involved with the Mosaddeq coup as declassified documents from 2011 have revealed.

The declassified documents explicitly state the CIA objective to replace the Iranian government in the early 1950s with a “pro-western government under the Shah’s leadership.”[2]

The U.S. and Iran have maintained a strained relationship for a long time as claims of CIA involvement kept surfacing.

These claims included such that the U.S. Officials were committing acts of violence and rape against the eastern locals.

However, these accusations were never brought to justice despite United States validation on the acts.

In response to a Freedom of Information Act (FOIA) request in 2013, the CIA confirmed its role in the coup as various documents outlining its involvement have been released to the public, most of which were previously unknown.

The evidence followed by violent protests and strikes.[3] Ultimately, the United States promised to refrain from interfering with Iranian internal affairs.

The U.S. government coup was eventually discovered as the United States was providing services to both Iran and Iraq.[4]

There is, therefore, no legitimate reason for any thinking person to believe anything they’re told about what’s happening in that country.

As soon as you know the CIA is involved in any situation, you know you can’t look at it separately from the smoke and mirrors that these lying, torturing, warmongering psychopaths have inserted in between what’s actually happening and the public perception of what’s happening.

All you know for certain is that there is an organization bent on deceiving you into supporting a coup that the US intelligence/security machine has been pursuing for a long, long time, and that its involvement in the nation in question has escalated.

he Central Intelligence Agency’s secret history of its covert operation to overthrow Iran’s government in 1953 offers an inside look at how the agency stumbled into success, despite a series of mishaps that derailed its original plans.Written in 1954 by one of the coup’s chief planners, the history details how United States and British officials plotted the military coup that returned the shah of Iran to power and toppled Iran’s elected prime minister, an ardent nationalist.

The document shows that:

“These elements had received CIA-funded training in various countries under the cover of becoming citizen-journalists,” IRNA quoted the Intelligence Ministry as saying. “Six were arrested while attending the riots and carrying out (CIA) orders and two while trying to … send information abroad.”

Iran later on the same day gave a glimpse into the scale of what may have been the biggest anti-government protests in the 40-year history of the Islamic Republic, with an official saying 200,000 people had taken part and a lawmaker saying 7,000 were arrested.

Supreme Leader Ayatollah Ali Khamenei, in his strongest remarks since the unrest peaked, described the two weeks of violence as the work of a “very dangerous conspiracy”.

He also said the unrest, initially sparked by fuel price hikes but which then spiraled, had been completely quelled.

Iran has given no official death toll, but Amnesty International said this week it had documented the deaths of at least 143 protesters. Tehran has rejected this figure.