Inaction is still a choice. It means no candidate was able to inspire that person to go to the polls. Or perhaps the whole system seems stupid to them. Whatever the reason, their electoral voice is not being heard.

But it should be loud and clear. The people want a “none of the above” option when it comes to elections.

Maybe then elections would make a difference. Instead of abstaining, or voting for the lesser evil, you could choose no one.

If “no one” won, then the seat could either remain vacant or a new election could be called with all new candidates. This wouldn’t solve all the issues with democracy, but it would be a good start.

Well quit your dreaming, it will never happen. Politicians won’t pass laws that make their own reelection harder.

But another solution doesn’t require the approval of politicians. It could be used as a tool of the electorate to actually have its voice heard in electoral politics.

A referendum is when the people vote directly on a policy issue, like legalizing marijuana for instance.

A Referendum Candidate would be a stand-in when that option is not available.

1) Make voting for this third-party candidate a referendum on the other candidates, or the two-party system in general.

Instead of voting for the lesser evil, you can vote for the Referendum Candidate standing in as a “none of the above” option.

The RC (Referendum Candidate) could pledge to never show up for work, refuse a salary, and make sure that the seat is “empty” for the next election cycle.

Example: An election with two unpopular candidates, one from each major party. No one really wants to vote for either one, so they resort to voting for the lesser of two evils.

An RC would come in and vow to occupy the seat without doing anything for the next election cycle.

But they would have to be someone who is clearly not partisan, otherwise, it will simply bleed votes from one party or the other, as Libertarian or Green Party candidates tend to do.

The RC would be running more as a neutral arbiter of the two sides. Something along the lines of, “Look, both our choices are really terrible, let’s just sit this one out. Send a message to both parties that they better shape up, or neither one will get the seat.”

If the RC loses but captures, say 15% of the vote, they will make headlines that 15% of the electorate voted non-of-the-above. Next election cycle, more people will want to join the chorus of disapproval for the politicians, as long as the RC wasn’t a spoiler candidate.

2) An RC could run on a specific issue that your politicians have been ignoring, or that both mainstream politicians agree on.

But in order to make this work, RCs have to be single issue. Otherwise, they are no different than any other third-party candidate.

People need to feel their vote for the RC is making an actual statement, versus being thrown away. Then even if the RC doesn’t win, the message is clear. X percentage of voters agree strongly with the single position on which they ran. And that could influence the politician who does win to adopt that policy.

So to be a true Referendum Candidate, you would have to pledge to not vote on any matters that don’t relate to that single issue platform.

Example: A county in Washington state banned marijuana businesses, despite a state law that legalized them. Say both candidates for County Commissioner support the ban.

A Referendum Candidate could come in and run on the single issue: repealing the ban on marijuana retail in the county.

Who has partisan politics been excluding?

Republicans and Democrats have become so polarized that you actually have to be at least a little crazy to even run for office these days. How else could you align yourself with such rigid ideologies? 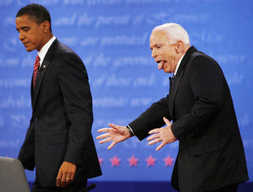 So perhaps Referendum Candidacies could actually give truly moderate, independent people a chance to re-enter the arena of politics.

1) Run as a true voice of the people. Let your constituents voice their opinion on every vote, and serve as a true proxy for the people. At least then the RC would be an actual representative.

But to be a truly non-partisan wise judge would be the ultimate respect for this position. Carefully weigh what the people tell you, and make the final decision–probably the way it was intended to be.

2) Design a platform from scratch. But this would require careful planning to avoid any of the buzzword issues that would reveal you as a mole of one side or the other. Explain the issue in new terms, and dissect why both the left and the right gets it wrong, or better yet, which tiny elements of the issues they get right.

But this won’t work if you are truly a lefty or righty, simply trying to repackage the same ideas. You must be genuinely different, and it would help to have no background of belonging to a party or publicly voicing partisan opinions.

Where would this work?

This will work best in local elections but could be effective in any region where a widespread complaint of the electorate has gone unaddressed for too long.

It would be effective in elections where people choose to stay home rather than vote for the lesser of two evils.

It would likely work best in swing districts without a strong element of either party.

Then again it can give a longshot candidate a chance in a district dominated by one party, especially if voters are disenfranchised.

Now, instead of voting for a person, they could be voting to address one specific issue. Or voting to voice their disapproval of every other candidate.

Who knows exactly what Referendum Candidates could accomplish. But given the clear winner in every election is “did not vote,” this has the potential to harness a massive amount of political power.

It’s hard to imagine it would make things worse.

You don’t have to play by the rules of the corrupt politicians, manipulative media, and brainwashed peers.

When you subscribe to The Daily Bell, you also get a free guide:

This guide will show you exactly how to plan your next two years to build the free life of your dreams. It’s not as hard as you think…