If the Nuremberg laws were applied, then every post-war American president would have been hanged~ Noam Chomsky 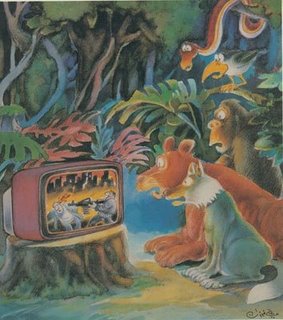 ✂️  geopolitica.ru
The U.S. led “Law of the Jungle” has created the series of endless wars and regional conflicts.

More than 60 independent and sovereign states were destroyed directly and indirectly by Washington interference to usher the uni-centric World Order with Western allies in this 21st century.

American defense planning of 21st century is based upon “America is the nation at war” doctrine intended to run outdated unipolar hegemony by hook and crook.

Therefore America has not only executed “law of the jungle” to run world affairs unilaterally  but now to save Washington power-centric hegemony, it is using third degree methods to keep control over world nations.

But this hawkish rhetoric has fueled chaos all-around the world from Africa to Asia.

America has involved in attempts to bring regime change in different countries around the globe to achieve its geopolitical objectives through color revolutions.

While in many countries it has launched direct military option to install puppet regimes.

The situation in Iraq, Libya, Syria and Afghanistan is the witnessed of it that how America assaulted unilaterally on these sovereign states to alter regional map.

Now it has trying to extend ground based strategic defense missile system from Europe to Asia with the construction of American defense system complex also known as European Interceptor Site (EIS) in Poland for Europe and the installation of THAAD on South Korean soil for Asia.

Bluntly speaking, the U.S. is attempting to breakdown of world peace by posing nuclear war threat with global missile program which is a direct threat to Eurasian superpowers Russia and China.

Although the US has projected this global missile system hosted by Poland and Korea for defense purposes but the fact is that this is a deliberately attempt to undermine or weaken Russia and China’s strategic nuclear deterrent.

Both countries agree that the deployment of such ground based American defense systems in Europe and Asia is simply sharp-cut venture to tear down the geostrategic balance of the power that guaranteed the safety of humanity from the major conflict, over past 71 years.

Now America on the name of defense is fueling aggression with the installation of ground based missile systems having ability to penetrate distance of up to 1000 Km and then further depends on the advancement of technology.

This is a clear cut message that America is going to violate the Intermediate-Range Nuclear Forces (INF) Treaty negotiated by President Reagan and Soviet General Secretary Gorbachov in 1987.

Both have not only opposed THAAD installation but declared it against the common security of the Asia-pacific.

Hence why both are filling the international leadership vacuum  with the construction of a multipolar world security framework and new mechanisms for international relations featuring win-win cooperation through  defeating the “law of the jungle” which was imposed by the US/NATO on the world.

Chinese President Xi Jinping, during his address to 70the session of UN General Assembly, already issued a loud warning in saying that the “law of the jungle” should not be the way for countries to conduct relations – warmongering will backfire.

Now both countries have rejected the shrill American call for global action to a global threat because both have already assembled world nations with their international and regional multipolar institutions.