I wonder how many people are still in denial that Israel owns us. Sometimes I get the feeling that too many people don’t even care. Even if they love Israel for [misguided] religious purposes, or just believe that Israel is our greatest ally. It’s unAmerican to accept a foreign entity to infest our government and have control over us in any shape or form.

Israel’s defenders both in the political realm and in the media have long used every weapon available to stifle any criticism of Israeli racism and its oppression of the Palestinians.

In particular, the use of “anti-Semitism” as something like a tactical discussion stopper in deliberations about the Middle East has long been a staple of both American and European politics.

It is freely employed to end all dispute while also condemning those accused of the crime to being somehow outside the pale, monsters who are consigned forever to derision and obscurity.

But the Israelis and, to be sure, many diaspora Jews know exactly how the expression has been weaponized.

Former Israeli Minister Shulamit Aloni explained how it is done “Anti-Semitic”…”its a trick, we always use it.”

If one were to read the U.S. mainstream media, reflective as it nearly always is of a certain institutional Jewish viewpoint, one would think that there has been a dramatic increase in anti-Semitism worldwide, but that claim is incorrect.

What has been taking place is not hatred of Jews but rather a confluence of two factors.

First is the undeniable fact that Israel has been behaving particularly badly, even by its admittedly low standards.

Its slaughter of Palestinians in Gaza has been unusually observable in spite of media attempts to avoid mentioning it, plus its support of terrorists in Syria and attacks on that country have also raised questions about the intentions of the kleptocratic regime in Tel Aviv, which is currently pushing hard for an attack on Iran and appears to have the Trump administration fully on board.

That all means that the perception of Israel as an exclusively Jewish state, inevitably raises questions about the behavior of the international Jewish community that has done so much to shape the favorable narrative, but it does not necessarily imply hatred of the Jewish ethnicity or religion.

Israel and its friends have worked hard to broaden the parameters of the discussion, making any criticism of Israel or its activities either a hate crime or ipso facto an anti-Semitic incident.

The State Department’s working definition of anti-Semitism now includes “…the targeting of the state of Israel” and it warns that anti-Semitism is a criminal offense.

Recent legislation in Washington and also in Europe has criminalized hitherto legal and non-violent efforts to pressure Israel regarding its inhumanity vis-à-vis the Palestinians.

That means that the numbers inevitably go up, providing fodder to validate a repressive response.

One might add that Hollywood, the mainstream media and academia have contributed to the allegations regarding surging anti-Semitism, relentlessly unleashing a torrent of material rooting out alleged anti-Semites and so-called holocaust deniers, while simultaneously heaping praise on Israel and its achievements.

All of the media exposure of so-called anti-Semitism has a political objective, whether intended or not, which is to insulate Israel itself from any criticism and to create for all Jews the status of perpetual victimhood which permits many in the diaspora to unflinchingly support a foreign country against the interests of the nations where they were born, raised and made their fortunes.

Two Muslim congresswomen, Rashida Tlaib of Michigan and Ilhan Omar of Minnesota, have dared to overtly challenge the reality that Jewish power is greatly disproportionate in Washington. Tlaib said that the sponsors of legislation intended to benefit Israel by limiting free speech

“…forgot what country they represent. This is the U.S. where boycotting is a right and part of our historical fight for freedom and equality. Maybe a refresher on our U.S. Constitution is in order, then get back to opening up our government instead of taking our rights away.”

Indeed, Congressional Israel boosters have long since forgotten that they are supposed to uphold the Constitution of the United States while also promoting the interests of their constituents, not those of a country seven thousand miles away.

Glenn Greenwald of the Intercept responded to the Tlaib comment with a tweet “It’s stunning how much time US political leaders spend defending a foreign nation even if it means attacking free speech rights of Americans.”

Ilhan Omar then tweeted her own pithy rejoinder to Greenwald: “It’s all about the Benjamins, baby!” which was in reference to the Founder Benjamin Franklin’s portrait on hundred-dollar bills.

Her comment was almost immediately interpreted as meaning that she was accusing leading politicians of being bought by the Israel Lobby, which is at least in some cases basically true.

There followed a manufactured outrage, with political leaders from both parties latching on to a media frenzy to score points against each other.

Even though it is perfectly legitimate for a Congresswoman on the Foreign Affairs Committee to challenge what the Israel Lobby does and where its money comes from, Speaker of the House Nancy Pelosi complained that Omar’s “use of anti-Semitic tropes and prejudicial accusations about Israel’s supporters” was “deeply offensive.”

President Donald Trump, who has admitted that his Mideast policy is intended to serve Israeli rather than U.S. interests, also jumped in, saying “I think she should either resign from congress or she should certainly resign from the House Foreign Affairs Committee.”

Omar’s comments preceded the recent wave of pro-Israel censorship in news stories, on social media and also within information “search” services on the internet.

If anything, the effort to broaden the censorship of language and expressions relating to Israel and the activities of the Israel Lobby both in the United States and worldwide has increased.

News/information sites like Yahoo have stopped allowing comments on their articles in part because the comments often contradicted their reporting on the Middle East and also on other issues.

Just notified by YouTube that @AbbyMartin’s interview with @MaxBlumenthal has been blocked from being viewed in 28 countries (including Israel) to “comply with local laws.” Actions disabled & warnings for viewers elsewhere. https://t.co/Kr2rbfXabg pic.twitter.com/vKPxABjsZ7

As it is an election year and both parties are seeking tens of millions of dollars from Israel-tied Jewish donors like Sheldon Adelson and Haim Saban, the effort to make any criticism of Israel hate speech is intensifying.

Two weeks ago “…more than 120 organizations sent a letter to the social media giant [Facebook], urging it to ‘fully adopt’ the International Holocaust Remembrance Alliance (IHRA) working definition of antisemitism as the ‘cornerstone of Facebook’s hate speech policy regarding antisemitism.’

This definition, which was adopted by the IHRA in 2016 and has been promoted to governments worldwide, includes several examples of what it describes as ‘contemporary’ antisemitism — including ‘denying the Jewish people their right to self-determination, e.g., by claiming that the existence of a State of Israel is a racist endeavor” and “applying double standards’ to Israel — that can be interpreted to define much criticism of Israel, Israeli policies, or Zionism as antisemitism.” 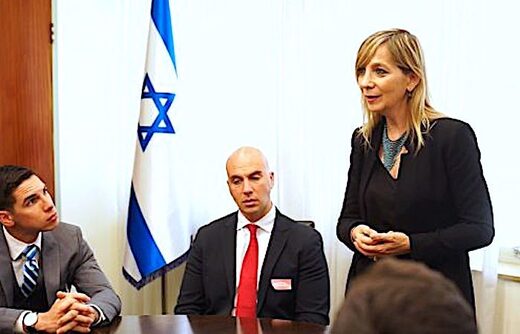 Facebook for its part has hired Emi Palmor, former director-general of Israel’s justice ministry, as a member of its new oversight board which will censor content on the site.

The company’s chief operations officer Sheryl Sandberg has also declared that FB is using “…the IHRA definition ‘in informing [its] own approach and definitions,’ that its new policy ‘draws on the spirit — and the text — of the IHRA,’ and that under Facebook’s policy, ‘Jews and Israelis are treated as “protected characteristics.'”

Protected characteristics has meant in practice that criticism of the activities of either Israelis or Jewish groups will not be acceptable on the site.

Anecdotal evidence suggests that Facebook is also now censoring any material that might lead to legitimate criticism of the Jewish state and its policies.

On August 18th the site removed a picture and article showing a road filled with dead Palestinian-owned sheep that were reportedly killed by an Israeli settler driver.

The Israeli deliberately ran over the animals with his car as part of a campaign to destroy the livelihoods of Palestinian farmers on the West Bank.

When the Israel Lobby complains that portraying Israel negatively is thinly veiled anti-Semitism, one might well respond that terrible things are being done in the Middle East in the name of Jews and of Israel.

Silencing critics by accusing them of a hate crime is little more than a perversion of justice to serve the demands of a powerful and wealthy minority as well as a denial of constitutional rights for all Americans.

When confronted by accusations of “anti-Semitism”, just recall what the Israeli minister admitted: “It’s a trick, we always use it.”