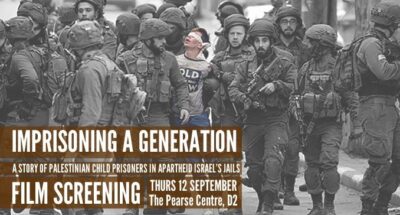 Zionism is a virulent philosophy and venomous ideology that has transformed Jews into tormentors, persecutors and oppressors as well as occupiers, liars and land thieves.

For many years now, Israel has been dumping Palestinians behind bars, or sending them to agonize in open-ended detainment in desert detention camps, purely for political reasons.

In hundreds of cases, there are absolutely no legal grounds, nor even according to the Israeli military laws, for the incarceration of indisputably innocent Palestinians.

Israel often doesn’t even try to justify this flagrant, vindictive and oppressive policy.

It just contents itself with invoking the security mantra, utterly ignoring the most elementary considerations of equity and justice.

In countries around the world, let alone countries that consider themselves civilized and democratic, a person is arrested, charged and prosecuted.

If found innocent, he is released, if not he is sentenced to jail terms or receives other forms of punishment.

Palestinians are arrested and kept away from their families for years without justifiable reasons.

Some of the positional torture (stress positions) used against Palestinian detainees at Israeli interrogation centers#StopTortrue#TortureIsAWarCrime pic.twitter.com/KrTejeU0xM

An individual’s ideological preference is often a sufficient ground for administrative detention that may linger for many years.

The fact that the wronged individual has done absolutely nothing wrong, has violated no laws, and committed no crimes has very little weight in the calculations of the Israeli occupation authorities.

For the Israeli political-military establishment, security whims and vagaries justify anything, including inflicting gross injustice on innocent people.

This shows that the ultimate purpose behind this brazen injustice is to torment individuals and activists Israel views as non-conformist. In other words, the motivation is pure sadism on Israel’s part.

The injustice meted out to the victims of Israeli detention policy is especially conspicuous with the so-called administrative detainees.

These people are effectively abducted from their homes and families and dumped into crowded concentration camps in the Negev desert.

One detainee, Mustafa Shawar, from Hebron in the southern West Bank , told this writer that he was imprisoned for more than 8 years without knowing the reason.

“I appealed to the Israeli military Judge to let me know the reason or reasons behind my incarceration at the Ktza’aout detention camp.

But the judge would never let me know of these reasons.

“I asked the judge how I could not repeat the crime or felony I had presumably committed if I don’t know what it is.

The judge simply told me he wouldn’t allow me the privilege of knowing why I was in jail.”

Shawar is just one example of thousands of Palestinians who are made to languish in Israeli dungeons, solitary cells and concentration camps for years without knowing the reason for their detention.

Ismael Awawdeh, 46, is a civil engineer from the small town of Dura near Hebron.

He, too, had been victimized by frequent detainments, each lasting for 6 months to two years.

All in all, Awawdeh has spent more than 70 months in administrative detention.

He is still languishing in jail without knowing the reason.

One of his relatives told this writer that “it seems that the only democratic state in the Middle East decided to keep him in jail for at least six months per year.”

Many of the detainees are actually prominent figures in their respective communities.

They are University professors, medical doctors and outstanding religious leaders and many of them are active in charitable works and helping the poor.

In general, one exaggerates little by saying that the detainees constitute the crème de le crème of the Palestinian society.

In many instances, Israel behaves and acts very much like a criminal gang rather than a real state where the rule of the law is upheld. 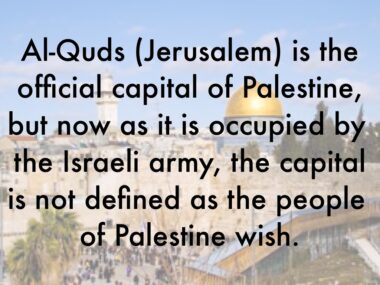 Indeed, ever since the Palestinian general elections in 2006 which the Islamic liberation movement Hamas won to Israel’s and America’s chagrin (both states had okayed the organization of the elections), Israel has been ganging up on as many as 50 of these lawmakers, accusing them of supporting a terrorist organization.

Needless to say, Israel is probably the last entity under the sun which is qualified to accuse others of being terrorists.

Israel, after all is probably one of the ugliest embodiment of terrorism in the whole world. 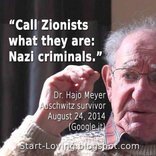 Besides, resisting a Nazi-like foreign occupier is anything but terror. In fact, one would be fornicating with language if one called those who fight for their freedom terrorists.

In the final analysis, however, a person should never ever be imprisoned for years for his emotions, sentiments and opinions.

In Israel, rabbis and others routinely publish books and deliver lectures and give homilies stating that the lives of Muslims and Christians and all other non-Jews have no sanctity and that they can be murdered without the slightest compunctions.

And when arrests are made, the Jewish inciter in question is questioned for five minutes in a chummy-chat style before allowing him to return home with all his dignity intact.

It is a stigma of shame on the forehead of Judaism to inflict this pornographic injustice on non-Jews just because these unfortunate people happen to be weak, vulnerable and defenseless.

But Zionism is also a cancer upon the conscience of Judaism; it is a virulent philosophy and venomous ideology that has transformed Jews into tormentors, persecutors and oppressors as well as occupiers, liars and land thieves.

I have no doubt that the dehumanizing oppression meted out to the Palestinians and others by Israel will speed up the corrosion and dissolution of the Zionist entity.

I am sure that the wise among Jews realize this eventuality very well.