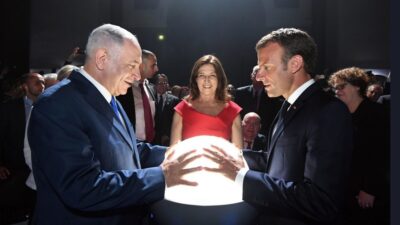 “President Macron’s trips had been preceded by the circulation of a petition calling on France to restore its mandate over Lebanon, that is to say, to recolonize it.”

Sure of his superiority, he said he was ashamed of the behavior of this political class.

But all this is just a bad play. Underhandedly, he is trying to destroy the Resistance and to transform the country into a tax haven.

Completing the implementation of Resolution 1559 [4] today means disarming Hezbollah and transforming it into a simple political party, as corrupt by Westerners as the others.

Let us recall, moreover, that when France established secular institutions, it immediately deprived all its colonies of them, considering that religion was the only way to pacify the peoples it controlled.

Lebanon is the only country in the world where a Shiite mullah, a Sunni mufti and a Christian patriarch can impose their views on political parties.

President Macron’s repeated attacks against Hezbollah are precisely in line with my hypothesis: the ultimate goal of the West is to destroy the Resistance and transform Hezbollah into a party as corrupt as the others.

Indeed, according to Emmanuel Macron, the current Hezbollah is at the same time a “militia”, a “terrorist organization” and a political party.

Yet, as we have seen, it is in reality both the first non-governmental army dedicated to the struggle against imperialism and a political party representing the Shiite community.

It has never been responsible for terrorist actions abroad. According to Macron, it has created “a climate of terror”, inhibiting other political formations.

However, Hezbollah has never used its gigantic arsenal against its Lebanese rivals.

The brief war of 2008 did not pit it against the Sunnis and Druze, but against those who housed spy centers of foreign powers (notably in the archive premises of FuturTV).

For those who observe precisely what is happening, France is not honest in its concern for Lebanon.

Thus, President Macron’s trips had been preceded by the circulation of a petition calling on France to restore its mandate over Lebanon, that is to say, to recolonize it.

It was quickly established that this spontaneous petition was an initiative of the French secret service.

Or that the French president’s second trip was the centennial of the proclamation of Greater Lebanon by General Henri Gouraud, leader of the French Colonial Party.

It is not very difficult to understand what France hopes to get in return for its action against the Resistance.