This is not Gaza, this is occupied Hebron. All of Palestine is occupied by the most disgusting aliens on the planet.

“Innocent people, most of them young, are slowly being poisoned by the water they drink.”

First of all, as Amira Hass, the respected journalist from Haaretz, pointed out today in the newspaper, the blockade of Gaza, in its milder form, but still severe form, it goes back 27 years. It started in 1991 during the first intifada. The blockade was then significantly, qualitatively intensified after the Hamas won the parliamentary elections—what Jimmy Carter, who was an observer, called a completely and honest—completely honest and fair elections, in January 2006.

The immediate reaction of Israel, followed by the United States and then the EU, was to impose this brutal blockade on Gaza, which at a certain point even blockaded, prohibited chips, potato chips, baby chicks, chocolate from entering Gaza. And then, after Hamas preempted a coup, orchestrated by the United States, Israel and elements of the Palestinian Authority in 2007, Israel ratcheted up the blockade of Gaza. Palestinian children wait for donated food while Israel eats theirs.

Now, who is responsible for the current crisis in Gaza? First of all, we have to be clear about—OK, let me start with who’s responsible. As you are no doubt aware, there’s been a—there’s a proliferation of reports, from the World Bank, from various U.N. agencies, UNCTAD, the IMF.

Children caged by occupation forces swinging their guns in Hebron

Now, we have to be clear, and I don’t want to get too dramatic about it, too emotive about it, but we have to be clear about that blockade. Number one, it’s a flagrant violation of international law, because it constitutes a form of collective punishment. Number two, since 2012, the United Nations—and these are very staid, conservative bureaucrats, who don’t use—they don’t use poetic language.

They start, in 2012, by saying—issuing a report in the interrogative: Will Gaza be livable in 2020? In 2015, UNCTAD issued a report. It then used the declarative. It said, on its present trajectory, Gaza will be unlivable in 2020. Now, bear in mind, literally unlivable. These are U.N. reports by professional economists. By 2017, the U.N., Robert Piper, he said, “We were too optimistic. Gaza passed the unlivability threshold years ago. Gaza, as we speak, it’s unlivable.”

Now, what does that mean concretely? Ninety-seven percent of Gaza’s drinking water is contaminated. Now, bear in mind, of the 2 million people in Gaza, 1 million or more, 51 percent, are children. One million or more are children. Sara Roy, who’s the world’s leading authority on Gaza’s economy—she’s at the Harvard Center for Middle Eastern Studies—in the latest edition of her standard work on Gaza’s economy, she says, “Innocent people, most of them young, are slowly being poisoned by the water they drink.”

Now, Sara is a very respected, cautious economist, or political economist, as she calls herself. “Innocent people, most of them children, are slowly being poisoned.” That’s what Gaza is today.

Now, to get back to Nikki Keddie—Haley, excuse me—to get back to Nikki Haley, she said, “What country in the world would do anything different to protect their border?” Let’s be clear: That is not a border, and that is not a border fence. Baruch Kimmerling, the sociologist in Hebrew University, the late sociologist, he said Gaza is the biggest “concentration camp” ever to exist.

David Cameron, the conservative British prime minister, he said Gaza is an “open-air prison.” Haaretz, the most respected of Israel’s newspapers, referred to the “Palestinian ghetto.” Israel’s snipers are poised not on a border. They’re poised on the perimeter—call it a concentration camp, call it a ghetto, call it an open-air prison.

And the people of Gaza—it’s unusual in the world today. As the United Nations Relief and Works Agency pointed out, they said Gaza is different than all the other humanitarian crises. Why? If there is a natural disaster, like a drought, people move. If there’s a human-made disaster, like Syria, people move. Gaza is the only place on Earth where the place is unlivable and the people can’t move. They can’t leave. They’re trapped. 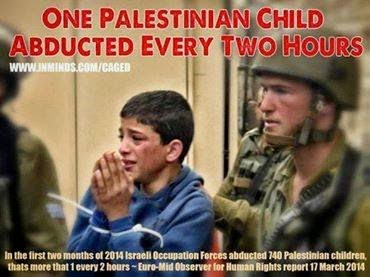