These are the people fighting to get their land back from the terrorist children of the terrorist Irgun. Israel is nothing but the legitimization of Zionist terrorism which has continued unabated for over 70 years.

Al Ata was directly responsible for hundreds of terror attacks against Israeli civilians and soldiers. 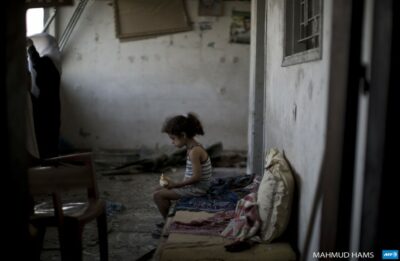 The Occupation of Palestine. The Zionists stole their homes and land.

“We have to wait and see if “strongman” Netanyahu follows the killing of Bahaa Abu Al-Ata with another major offensive. If Hamas doesn’t respond, it will lose face amongst the Palestinians. If it does, a major military attack with devastating potential is the possible outcome. Netanyahu, it seems, is ready to do anything to boost his popularity and maintain his grip on power in Israel.”

The 42-year-old was killed in an Israeli air raid on his home in Gaza that also killed his wife.

Bahaa Abu al-Ata, a commander of the Palestinian group Islamic Jihad, has been assassinated in an Israeli air raid targeting his home in the besieged Gaza Strip.

The attack in the early hours of Tuesday also killed the 42-year-old’s wife. Medics and local sources told Al Jazeera that the raid in Gaza’s Shejaiya neighbourhood also wounded two of his children who are receiving medical treatment in the city’s al-Shifa hospital.

During the 2014 Israeli war on the Gaza Strip, Abu al-Ata had survived an assassination attempt when he was a deputy commander to Daniel Mansour, commander of al-Quds Brigades in northern Gaza, the sources said.

Overall, more than 2,250 Palestinians, including nearly 1,500 civilians, were killed and a further 11,000 were wounded in the July-August 2014 war, according to Palestinian and United Nations estimates. On the Israeli side, 66 soldiers and six civilians died.

At a press conference on Tuesday, Israeli Prime Minister Benjamin Netanyahu alleged that Abu al-Ata was “in the midst of plotting additional attacks these very days”, without elaborating.

“He was a ticking bomb,” he added.

Meanwhile, Islamic Jihad promised to avenge Abu al-Ata’s killing. A barrage of rockets was fired towards Israel after his assassination was confirmed.

“Our inevitable retaliation will rock the Zionist entity,” the group said, referring to Israel.

According to political analyst Zulfiqar Swirgo, the assassination operation was not a new policy but an urgent necessity to rescue the Israeli Prime Minister. “The developments and escalations might put Netanyahu in trouble, but this depends on the level of response from the Palestinians, Iranians and Syrians. He has become a dangerous mafia thug.”