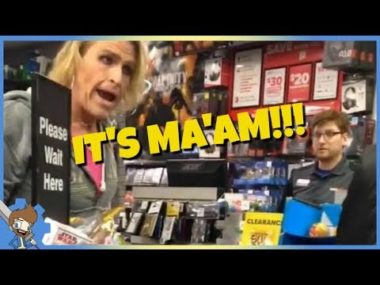 Something weird about that new TED Talk™ about sexuaIizing children… pic.twitter.com/5nvUSCkaN4

So that everyone gets to feel good about themselves.

However, women who identify as male are not being offered crucial routine breast screenings or cervical cancer checks

WOMEN who identify as male are not being offered vital routine breast screenings and cervical cancer checks in case it offends them.

But men identifying as women will be invited for cervical smear tests – even though they don’t have a cervix.

The PHE booklet explains “who we invite for screening”.

Transpeople who register with their GP as their birth sex will be invited to screenings appropriate to that, but if they register as they gender they identify as they will not be.

Cervical cancer claims the lives of 900 women each year in Britain, and it is believed the number would be four times higher without screening.

Screening saves lives by spotting cancer early so treatment can begin sooner. Those who are not screened are more likely to develop a more advanced cancer which can be fatal.

Men identifying as women will also miss out on getting tested for a blood vessel defect called an abdominal aortic aneurysm (AAA), from the age of 65 men are invited to attend an ultrasound scan.

AAAs are six times more comment in older men than women, and if left untreated can result in a fatal artery rupture.

The booklet warns: “Any trans woman [born male] will have the same risk as a man and should consider accessing screening.”

But it adds: ‘If you are a trans woman aged 65 who is registered with a GP as female, you won’t be invited for screening.”

Public Health England have said that screening invitations were automatically sent by computer and were based based on the patients’ registered age and sex.

Women’s campaigner Laura Perrins told the Mail On Sunday: “We’ve now got to the point where state collusion with this transgender agenda is endangering the health of women.

“It’s a ludicrous use of NHS resources to invite men for a cervical smear test, while it’s immoral and dangerous not to invite women.”

0
0
LAGenie @lagenie24
2 days ago
Blinken has said all parties should go back in, and make the deal tougher on Iran.
Netanyahu has been saying loudly that the U.S. must not reenter the deal. This could get interesting…
https://t.co/OuV35pKTOR
View on Twitter
0
0
LAGenie Retweeted · Henry Makow @HenryMakow
6 days ago
There is no great secret global backroom conspiracy developed behind closed doors. What we have is an upfront, publicly co-ordinated, globe-spanning political power campaign to use the COVID-19 pandemic as a launchpad for a reshaping of the global economy