Military attacks and terrorist attacks on the surface of the Earth are caused by world Zionism, through NATO, GRU, CIA, Mossad, SAS, FSB-KGB, DST, MAD, Cesis and others, economic and political destabilization for Colonization Hebrew worldwide.*

“While the Zionists try to make the rest of the World believe that the national consciousness of the Jew finds its satisfaction in the creation of a Palestinian state, the Jews again slyly dupe the dumb Goyim. It doesn’t even enter their heads to build up a Jewish state in Palestine for the purpose of living there; all they want is a central organization for their international world swindler, endowed with its own sovereign rights and removed from the intervention of other states: a haven for convicted scoundrels and a university for budding crooks. -Hitler was right* 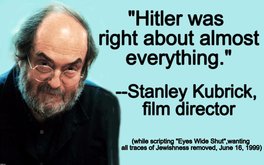 THE late Stanley Kubrick once remarked that ‘Hitler was right about almost everything,” and insisted that any trace of Jewishness be expunged from the ‘Eyes Wide Shut” script that author Frederic Raphael was writing for him.

Exposing Israel’s Arms Sales to Oppressive Regimes
Israeli human rights lawyer Eitay Mack is working to uncover both Israel’s historic ties to brutal military regimes, such as Pinochet’s Chile, as well as its current arms exports to countries carrying out gross violations of human rights, like South Sudan and Myanmar.

Israel’s ticket to becoming an arms exporter — with deals dating as far back as the 1950s, when the global arms industry was already saturated — is Israel’s “no questions asked” policy, explains Mack: “You don’t criticize what we are doing in the occupied territories and inside Israel, and we won’t say anything and won’t ask questions about what you’re doing.”

LAGenie Retweeted · Nagy Abdelsalam @24nagyelshafie
2 days ago
Never, ever, ever to name Israel as a state. Israel is a very systematic gang that follows the laws of predatory forest, supported by USA, Europe, and all Arab rulers because all of them are dictators and Zionist agents particularly M. Abbas, Sissi, M. Salman https://t.co/hMGRGaV0cc
View on Twitter
2
0
LAGenie @lagenie24
4 days ago
https://t.co/43i4t9YSaL https://t.co/RJj9xtimbZ
View on Twitter

0
0
LAGenie Retweeted · Middle East Eye @MiddleEastEye
5 days ago
On this day 60 years ago, France tested its first nuclear bomb in the south of Algeria around 30 miles south of the small town of Reggane

1190
0
LAGenie Retweeted · Burning Flowers... @willwilla1
5 days ago
@danielmarans @fshakir @BernieSanders Everyone sees the writing on the wall. Get on board or get pitchforked, ur choice...
View on Twitter
1
0
LAGenie Retweeted · Chris Floyd @empireburlesque
5 days ago
My fellow Americans: You think you live in a free country? You don't. You live in an authoritarian ethno-state that's sending armed goons to impose its will on you. And these same goons will come for you if the vote goes the "wrong" way in November. https://t.co/p9xxQuo7Qe
View on Twitter
7
0
Follow @lagenie24