“It is hardly a surprise that the many people who adhere to the holocaust are engaged in the destruction of Palestine and its indigenous people.” 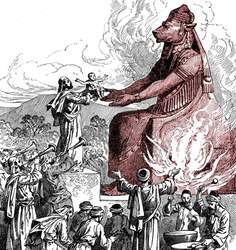 Photo inserts mine.The Israelites never changed their heart condition nor ceased to worship Baal their master. Part of the NEW Jews follow this order. They are the ones in power today over Jew and gentile.

‘Yeshayahu Leibowitz, the philosopher who was an observant Orthodox Jew, told me once: “The Jewish religion died 200 years ago. Now there is nothing that unifies the Jews around the world apart from the Holocaust.”’ Remember What? Remember How? – Uri Avnery

In The Wandering Who I argue that the Holocaust discourse in its current form contains numerous essential religious elements. It has priests and prophets.

It has commandments and dogmas (e.g. ‘Never Again’) and rituals (memorial days, pilgrimage to Auschwitz, etc.).

It has an established, esoteric symbolic order (good, evil, death, liberation). It also has a temple, Yad Vashem, and shrines – Holocaust museums in capital cities worldwide.

The Holocaust religion is also maintained by a massive global financial network, what Norman Finkelstein terms the ‘Holocaust industry’.

This new religion is coherent enough to define its ‘antichrists’ (i.e. Holocaust deniers), and powerful enough to persecute them (through Holocaust-denial and hate-speech laws).

I also argue that the Holocaust religion is the conclusive and final stage in the Jewish dialectic; it is the end of Jewish history.

The new religion allocates to Jews a central role within their own universe. In the new religion: the ‘sufferer’ and the ‘innocent’ march toward ‘redemption’ and ‘empowerment.’

God is out of the game and has been sacked, having failed in his historic mission. He wasn’t there to save the Jews, after all. In the new religion ‘the Jew’, as the new Jewish God, redeems himself or herself.

I indeed denounce the new religion and for the obvious ethical and humanist reasons. The holocaust religion adheres to the primacy of one people.

It is an anti-universal precept that offers no hope, mercy or compassion.

It instead produces a rationale for more oppression, global conflicts and havoc. It is hardly a surprise that the many people who adhere to the holocaust are engaged in the destruction of Palestine and its indigenous people.

As far as I can say, the Holocaust religion is a blind, non-empathic precept.

One thought on “I Denounce the Holocaust Religion, but I am not Alone”

LAGenie Retweeted · tim anderson @timand2037
5 hours ago
Compare US police state racist and inhuman tactics with those of the colonists in occupied #Palestine https://t.co/KCwXm2erNa
View on Twitter
299
0
LAGenie Retweeted · True Torah Jews @TorahJews
3 days ago
It's no news that Jews & Muslims lived in peace for 100s of years. Not only were we not enemies, but rather came together as friends.