By design, CIJA has a strong relationship with U.S. law enforcement. Nations committed to the overthrow of the Syrian government fund and support the CIJA’s work in Syria – casting doubt on both their integrity and their motivations.

While the article claims it now has “memos sent to Syria’s head of military intelligence” to back up previous claims, it admits “some information was blacked out to protect the integrity of evidence for possible prosecutions.”

Yet in order to accuse a government publicly of maintaining “secret torture prisons,” evidence must be provided.

Instead, the NYT presented recycled accounts from “activists” and opposition figures as well as Western-funded fronts including the “Syrian Network for Human Rights” and the  “Commission for International Justice and Accountability” CIJA

The CIJA in particular is claimed by NYT to have collected the alleged memos. Nothing about the CIJA’s background is provided by the NYT, nor can any website with background information be found.

However, the US government’s Commission on Security and Cooperation in Europe (CSCE) interviewed CIJA director of investigations and operations, Chris Engels in 2018. In the interview, CIJA’s funding was discussed:

[Chris Engels:] We have had a number of donors over the years. Our current donors include the United Kingdom, Canada, the European Union, Germany, Demark, the Netherlands, and Norway.

Engels also openly admits that the CIJA works directly with the US government. In the interview he admits:

By design, CIJA has a strong relationship with U.S. law enforcement.

When asked if members of the US Congress have supported the work of CIJA, Engels would enthusiastically confirm so – citing proposed laws pertaining specifically to Syria.

In other words – nations committed to the overthrow of the Syrian government fund and support the CIJA’s work in Syria – casting doubt on both their integrity and their motivations.

Just as the NYT would be remiss to write an entire article based on claims made by the Syrian government itself – it is remiss in uncritically reporting the claims made by its opponents.

The fact that the CIJA’s “evidence” is so heavily redacted that the NYT merely mentions it before building the rest of its article around older hearsay-accounts from its regular circle of “activists” and opposition figures, including the now notoriously discredited informant – “Caesar” – casts even further doubt.

The NYT appears to instead be contributing merely to the latest chapter of US-driven war propaganda aimed at undermining the Syrian government, protracting the Syrian conflict, and further dividing and destroying the nation.

A renewed barrage of war propaganda has been launched by the West in tandem with Syrian government efforts to move in on Idlib – the last bastion of Al Qaeda and affiliated terrorist organizations west of the Euphrates River.

But it was the Western media – not the Syrian government or its Russian and Iranian allies – who have definitively exposed the overwhelming presence of terrorists in Idlib.

In 2015, it was the Wall Street Journal that reported in its article, “Assad Loses Final Idlib Stronghold to Al Qaeda-led Insurgents,” that:

After a two-year siege, al Qaeda’s affiliate in Syria and other insurgents on Wednesday captured the one remaining Syrian army air base in Idlib, a development that activists said effectively expelled the last of President Bashar al-Assad’s military from the northwestern province.

Since 2015, Al Qaeda and its various affiliates have expanded and consolidated their control in the region.

The Islamic State group may have lost all its territory in Syria but a rival jihadist group has been making gains in the last remaining opposition stronghold in the north of the country – and it has got residents nervous.

In a dramatic takeover last month, Hayat Tahrir al-Sham (HTS) swept through towns and villages in Idlib province, as well as adjoining parts of Aleppo and Hama.

The group – which was known as al-Nusra Front before it broke off formal ties with al-Qaeda three years ago – expelled some rebel factions and forced others to surrender and recognize a “civil administration” it backs.

In reality – US State Department-designated foreign terrorist organizations like al-Nusra – have dominated fighting against the Syrian government since the conflict began in 2011 with the notion of “moderate rebels” a propaganda ploy to obfuscate the true nature of US-backed militants.

And while the BBC attempts to disassociate al-Nusra from Al Qaeda in its article by claiming it “broke off formal ties” three years ago – the US State Department itself in a 2018 amendment to its terrorist designation of al-Nusra would explicitly state (emphasis added):

In January 2017, al-Nusrah Front launched the creation of HTS as a vehicle to advance its position in the Syrian uprising and to further its own goals as an al-Qa’ida affiliate. Since January 2017, the group has continued to operate through HTS in pursuit of these objectives.

The Coordinator for Counterterrorism, Ambassador Nathan A. Sales, noted that “today’s designation serves notice that the United States is not fooled by this al-Qa’ida affiliate’s attempt to rebrand itself. Whatever name Nusrah chooses, we will continue to deny it the resources it seeks to further its violent cause.”

The candor of the US State Department’s amendment – however – is demonstratively contradicted by current, ongoing US support for the terrorists themselves as well as the current Western propaganda campaign aimed at protecting Al Qaeda under its various aliases from efforts by the Syrian government to remove them from Idlib and restore order there.

If Idlib is admittedly overrun by terrorists – according to the West itself – then Syrian government efforts to remove them is justified.

Yet familiar themes from similar efforts aimed at preventing Syrian forces from liberating other cities and regions from terrorists are being dusted off and reused. This includes the rehabilitation of the so-called “White Helmets,” a war propaganda troupe working side-by-side Al Qaeda and other terrorist organizations – often aiding and abetting war crimes including summary executions. 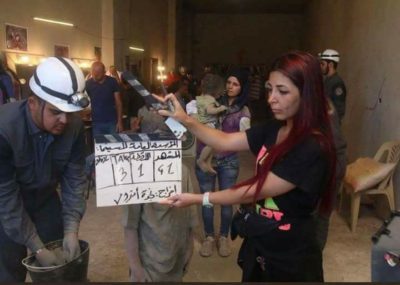 There is also the constant din of Western propagandists citing “barrel bombs,” a term invented to describe unguided munitions – unguided munitions being neither against international conventions nor considered controversial by any standing military force, East or West – now or at any other time in the history of warfare.

They are simply ordinary bombs given an ominous title in the service of otherwise dishonest Western-driven war propaganda.

The NYT’s recent article recycling stories of “secret torture prisons” seeks to lump itself in with this propaganda blitz and more should be expected to follow.

Among the propaganda there is nothing new – no new information, no new accusations, no new or inventive ways to repackage or resell it.

Redacted pages of what is supposed to be “evidence” of the Syrian government’s crimes looks instead like the NYT and its Western-government funded source – the CIJA – have something to hide – not something to expose.

However – war propaganda alone cannot win a war. It can only enhance the strengths of a government or coalition who must already possess the means of winning any given war.

The United States and its collaborators in its proxy war on Syria have already long-since lost.

The NYT posting pictures of illegible, nearly fully redacted pages and claiming it is “evidence” comes across as self-inflicted satire.

US government and corporate foundation-funded fronts like “Human Rights Watch” repeating these dubious accusations and outright lies also indefinitely cripple their own credibility.

However dubious – ongoing propaganda still seeks to at the very least hamper and slow down Syrian security operations.

The retaking of Idlib and the destruction of Al Qaeda’s last significant base of operations in the country is key to stabilizing the region.

As the US continues positioning itself for war with nearby Iran – a festering terrorist foothold like Idlib would serve as a serious liability for Iranian efforts to defend itself at home while dealing with a serious, sudden offensive launched out of Idlib against its Syrian allies.

Thus it is key to expose and confront Western war propaganda at every juncture – no matter how ineffective it appears – to minimize its impact in this war – and every other Western war of aggression to come.

LAGenie @lagenie24
11 hours ago
I can't believe these criminal cops acted in broad daylight killing a man and posing for the camera, where do they think they are...israel?
#GeorgeFloyd https://t.co/UeoNXnevht
View on Twitter

47
0
LAGenie Retweeted · tim anderson @timand2037
2 days ago
Compare US police state racist and inhuman tactics with those of the colonists in occupied #Palestine https://t.co/KCwXm2erNa
View on Twitter
414
0
LAGenie Retweeted · True Torah Jews @TorahJews
5 days ago
It's no news that Jews & Muslims lived in peace for 100s of years. Not only were we not enemies, but rather came together as friends.