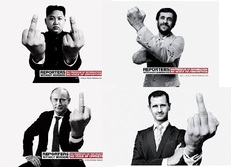 I respect Putin for not being a goofball like American politicians, generals etal. Apparently the Jews do not choose the Russian president and administrations.  I think that Russia has been an important balance of Western power. I also think that Putin is an excellent statesman (compared to others) looking after Russian interests where in US it seems to be every president and politician for himself, to hell with America. No national pride whatsoever.

Beyond that, I think I know Zionists better than Russians. I know their script since it’s been used since the beginning, never changes, word for word, action for action  to the point of absurdity only they don’t seem to notice. Russians, I can never put my  finger on the Russians so I will just chalk it up to national interests, nothing personal.  And I can accept that.

For the first time this year, masked Russian police officers detained Muslim worshipers coming out of a mosque near Moscow, raising fears in the local Islamic and human rights community that the authorities may be readying for a broader crackdown against Muslims there.

Such a step might be popular with many Russians, but it would likely spark protests by the capital region’s increasingly numerous Islamic community and potentially encourage violent clashes between its members and the authorities.

A week ago, on October 13, some 30 to 40 Russian police officers wearing masks and fatigues surrounded approximately 100 Muslims coming out of a mosque in Mytishi, Moscow Oblast. The police told the crowd that they were not arresting anyone but still detained many of them on a bus for five hours to allow the authorities to check their documents (Lenta.ru, October 13).

Those detained released a video clip confirming this (YouTube, October 13). Those individuals who were detained later told human rights groups that what they found most ominous was that, in the end, their documents were never checked, no protocols were compiled, and they were subsequently released without any explanation of what had occurred.

Nor has any official explanation been forthcoming in the days since. “We were simply loaded into buses like sacks of potatoes and then unloaded in the same way,” one person said.

In the past, when masked police behaved in this way toward Muslims in Russia, such actions had often been training exercises that the authorities were unwilling to acknowledge. But other times, the marked the start of a new campaign of harassment against Muslims by the police or by those in the population who saw this kind of official move as giving them the green light to lash out against their Islamic neighbors.

Particularly in the context of this month’s protests in Kabardino-Balkaria and Ingushetia (see Commentaries, October 23), the possibility that the Russian authorities want to provoke such conflicts is especially worrisome.

It could create a situation in which the powers that be in Russia feel fully justified in significantly tightening the screws—a step that many Russians might approve of if it can be cast as an anti-Muslim action.

Taking this action would have one additional virtue from the Kremlin’s point of view: the United States government and many in Europe would likely be unwilling to criticize any moves to control what the Moscow media would certainly suggest was “an Islamic threat” in the Russian capital.

LAGenie Retweeted · True Torah Jews @TorahJews
10 hours ago
It's no news that Jews & Muslims lived in peace for 100s of years. Not only were we not enemies, but rather came together as friends.

227
0
LAGenie Retweeted · Abrar Khan @khanabrar643
10 hours ago
"We will not allow the Palestinian lands to be offered to anyone else," Turkish President Recep Tayyip Erdogan said in a video message on Twitter addressed to US Muslims.

https://t.co/ImbLxAIIDg
View on Twitter
50
0
LAGenie Retweeted · Syrian Girl 🇸🇾 @Partisangirl
10 hours ago
Imagine you're a Syrian farmer, you've spent all year painstakingly cultivating your wheat crops. Then spring comes and it's finally harvest time! Then US helicopter drop just one bomb and sets them all on fire. All the hard work to ash. How will you feed your children this year? https://t.co/V4UCoUdFlQ
View on Twitter

4847
0
LAGenie Retweeted · Wayne Madsen @WMRDC
3 days ago
Memo to evangelicals: "Laying of hands doesn't mean the same to Trump as it does to you."
View on Twitter
3
0
LAGenie Retweeted · Angie Skys 8 @AngieSkys
3 days ago
There is an interesting situation in the US. Amid all the China bashing the Department of Justice in the US has become an ally for the Saudi Arabia government against the people in the United States suing for 9/11. The US government is helping Saudi fight Americans in court😎
View on Twitter
41
0
Follow @lagenie24