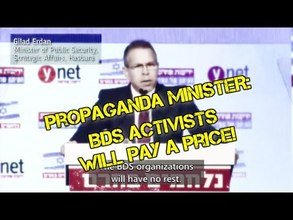 Help Chabad destroy USA, conquer the world and pick up your bonuses.

Speaking to a packed house of former government officials, oil executives, and lobbyists at a June 20th Atlantic Council event entitled “Russian Influence in Venezuela: What Should the United States Do?,” Scott launched into a tirade against Venezuelan President Nicolás Maduro.

Scott wasn’t referring to the tens of thousands of Venezuelans that have died as a result of the crippling US sanctions regime since 2017. He was pointing instead at Venezuela’s president.

“We are watching little children like my grandson Eli starve to death, intentionally!” Scott bellowed. “And there is one person that’s primarily responsible for it, and his name is Nicolás Maduro… I think we have to be very clear, whether it’s President Putin, President Xi or the Castro regime or Iran, they are part of killing little children.” 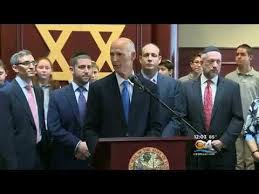 In August 2017, as the United States launched the opening salvo of its economic assault on Venezuela, American oil and gas corporations who poured huge sums into Scott’s electoral campaign colluded in an attempt to suffocate the country’s energy sector.

At the same time, Scott – whose oil-heavy investment portfolio stood to grow as a result of the prospective coup – led the way in the halls of power in Washington.

Scott’s donors in big oil have a clear interest in toppling Venezuela’s government. Since 2007, when President Hugo Chávez nationalized the assets of Venezuela’s national oil company, Petroleum of Venezuela (PDVSA), companies like ExxonMobil have been cut out of the country’s market.

“They will never rob us again, those bandits of ExxonMobil; they are imperialist bandits, white collar criminals, corruptors of governments, over-throwers of governments, who supported the invasion and bombing of Iraq and continue supporting the genocide in Iraq,” Chávez thundered that year on his weekly TV show Alo Presidente.

Rex Tillerson, who was CEO of ExxonMobil at the time, sued Venezuela in international arbitration court, demanding the full $10 billion in lost assets. Tillerson was initially awarded $1.6 billion, but the compensation was reduced to approximately $188 million before a US appeals court blocked the award altogether.

In 2017, Tillerson became Trump’s first secretary of state and initiated the administration’s push for regime change in an apparent attempt at revenge.

As the wealthiest person to serve as Florida’s governor, Scott also dipped into his $500 million family fortune to fund his campaign. But those assets were also heavily tied up in oil industry investments. 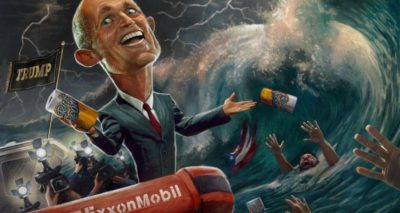 During his 2018 campaign for the Senate, Scott raked in tens of thousands of dollars from oil and gas industry political action committees, many of which had previously been customers of Venezuela’s national PDVSA oil company.

FEC records show Scott received $7,500 from Marathon Oil Corporation in 2018 through its PAC. Marathon had long anticipated the rounds of sanctions against Venezuela and had weaned itself off of the country’s crude in preparation.

Prior to the January 2019 sanctions that made importing fuel from PDVSA illegal, Marathon slashed its imports by 90 percent. “We saw this coming a long time ago,” Marathon CEO Gary Heminger said. “Five years ago [sanctions] would have had impact.”

Valero Energy Corporation was the top purchaser of Venezuelan oil until the US embargo choked off the country’s exports. When Scott ran for Senate, this oil titan’s PAC contributed $5,000.

Scott’s campaign bragged that companies supported Scott because of his hard-line stance against Venezuela’s leftist government. “Those who contribute to the campaign do so to support his candidacy, which includes calling for an end to the Maduro regime,” a spokesperson told Politico.

Scott and his wife owned as much as $30,000 in Chevron stocks and $65,000 in ExxonMobil stocks at the time the companies were funding his campaign, putting the couple in prime position to reap profits from regime change.

By 2014, Scott had a stake of $528,032 in Phillips 66. This oil giant was the fourth-largest importer of Venezuelan crude oil until 2017, and stopped importing Venezuelan oil altogether when the country was placed under embargo the following year.

As governor of Florida, Scott was the driving force behind his state’s decision to prohibit investment in Venezuela in 2017. A year later, he led the charge to enshrine that measure into state law.

Begging for an invasion

From the Atlantic Council podium, Scott opened up the floor for new ideas on attacking Venezuela’s economy.

“I tell people every day, ‘If you have an idea, I will see if I can make it happen,” the senator remarked, gazing out at the audience.

As the event transitioned into Q&A, a fresh-faced young Venezuelan emigre named Daniel DiMartino rose nervously from the crowd to deliver a plea for the US to wage a military assault on Venezuela.

Watch @SenRickScott rail against Venezuela and call for a possible US military strike at the NATO-funded Atlantic Council. Scott’s hundreds of millions of dollars are largely tied to oil, and his campaign was financed by oil corporations seeking regime change in Venezuela. pic.twitter.com/TZf0dzMYPO