After conducting medical examinations, it turned out that Israeli occupation forces used live explosive bullets and poisonous tear gas while quelling the peaceful marches of return. Most of the shots were in the neck, chest, abdomen and the pelvis. Many children had fractures in the limbs as well. 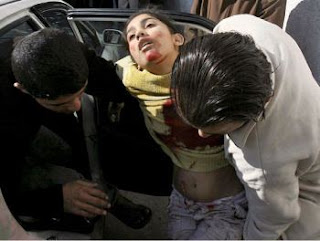 ‘Explosive bullets’ have been cited in state practice as weapons that violate this norm in some or all circumstances.

A trauma doctor treating the 750 severely injured Gazans in the Great March of Return massacre offers evidence that the IDF used exploding bullets to maximize the damage done.

After conducting medical examinations, it turned out that Israeli occupation forces used live explosive bullets and poisonous tear gas while quelling the peaceful marches of return. Most of the shots were in the neck, chest, abdomen and the pelvis. Many children had fractures in the limbs as well.

The prohibition of exploding bullets, under customary international law, on the use of means and methods of warfare which are of a nature to cause unnecessary suffering applies in international and non-international. 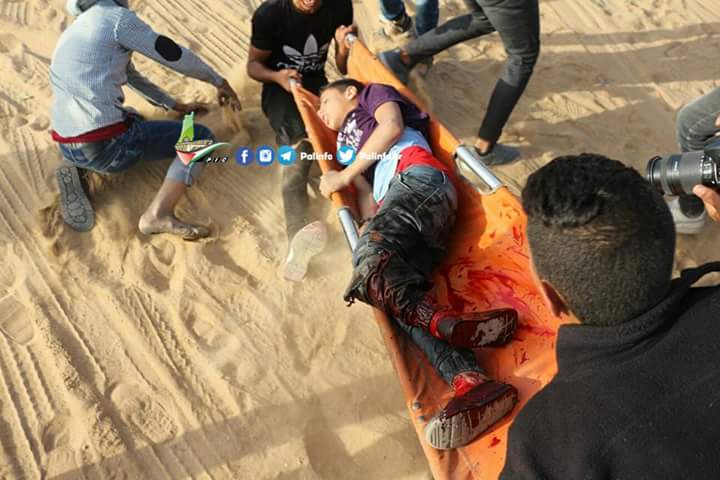 Abdul Rahman Noufal, a native of the Nuseirat during his participation in the peace march. His leg has been amputated.

Expansion, or hollow point, bullets are specialized bullets designed to deform upon impact because of a collapsible space within the projectile tip. The result is that a single projectile will inflict greater overall damage to a target, allowing an increased transfer of kinetic energy compared with a standard bullet. The “benefits” include a decreased risk of ricochet because the overall penetration distance is reduced; however, some of the older ammunition failed to expand on impact as a result of pieces of clothing obstructing the cavity.

Israel accuses the Syrian government of using chemical weapons against it’s citizens and recently attacks Syria targets killing Russians and Iranians who are in Syria legally. US-Israel has for decade after decade had a monopoly on chemical weapons use, and supply their proxies. They also routinely violate the airspace and borders of any country they wish, at will.  It’s not like there isn’t proof, what don’t people get about US-Israel? 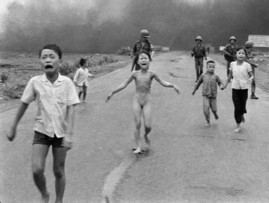 LAGenie Retweeted · Going Underground on RT @Underground_RT
8 hours ago
The US has bombed/invaded:

among many others. Maybe we need a UN arms embargo on the United States instead? https://t.co/kIhaMZhIj9
View on Twitter
50
0
LAGenie Retweeted · +972 Magazine @972mag
8 hours ago
“Keep your hands on the steering wheel. Don’t make sudden eye contact with the soldiers in front of you. Turn down your music.”

https://t.co/4TWcDYVVTB
View on Twitter
6
0
LAGenie @lagenie24
8 hours ago
Residents of Jerusalem reported that the occupation force on Tuesday night abruptly closed Qalandiya and Container checkpoints, north and south of Jerusalem City, and blocked the movement of Palestinian citizens for hours.
https://t.co/pKUAyed1oM
View on Twitter
0
0
LAGenie Retweeted · Consent Factory @consent_factory
1 day ago
In the new (pathologized) totalitarian future, your children won't have to be ordered to wear masks, because they will be conditioned to be paranoid from the day they are born. https://t.co/hZhIqohgCA
View on Twitter