For over fifty years, Israel has been producing nuclear weapons at the Dimona plant, built with the help mainly of France and the United States. It is not subject to inspections because Israel, the only nuclear power in the Middle East, does not adhere to the Nuclear Non-Proliferation Treaty, which Iran signed fifty years ago. 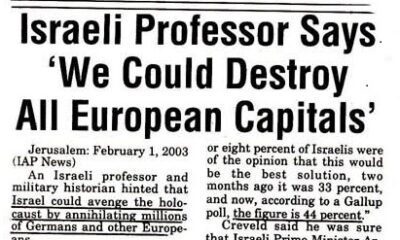 This is the way that almost all of the media have presented Iran’s decision, after the assassination of General Soleimani ordered by President Trump, to no longer accept the limitations on the enrichment of uranium planned in 2015 by the 5+1Group (United States, France, the United Kingdom, Russia, China, plus Germany).

So these organs of « information » are obviously in no doubt as to the source of the nuclear threat in the Middle East.

They are forgetting that it was President Trump, in 2018, who withdrew the USA from the agreement, which Israël had described as « the surrender of the West to the Axis of Evil guided by Iran ».

They do not say a word about the fact that there is only one nuclear power in the Middle East – Israël – which is not submitted to any form of control because it does not adhere to the Non-Proliferation Treaty, which is, however, signed by Iran. 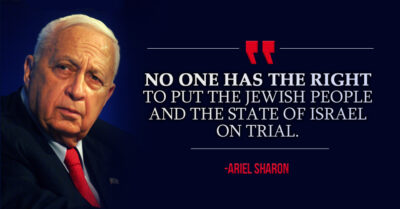 Israel is above being questioned or signing commitments.

The Israëli arsenal, shielded by a dense cloak of secrecy and omertà, is estimated at between 80 and 400 nuclear warheads, plus sufficient plutonium to build hundreds of others.

Among these are mini-nukes and neutron bombs which, since they cause minimal radioactive contamination, would be more adapted to targets close to Israël. 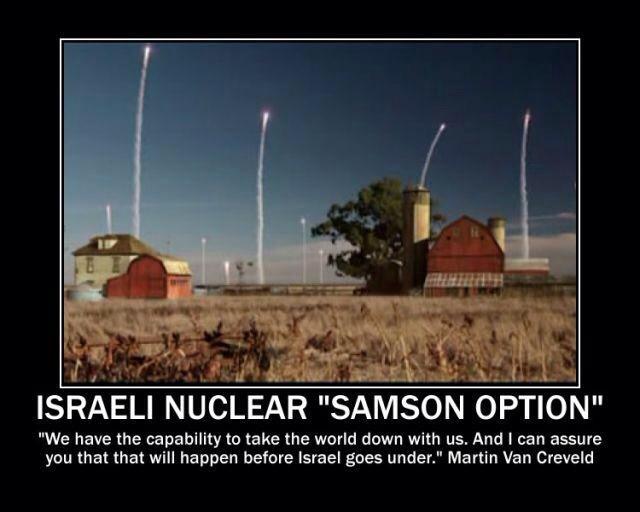 The Israëli nuclear warheads are ready for launching on ballistic missiles which, with the Jericho 3, have a range of 8 to 9,000 kilometres.

Germany supplied Israël (in the form of a gift or for knock-down prices) with four Dolphin submarines modified for launching Popeye Turbo nuclear missiles, with a range of approximately 1,500 kilometres.

Silent, and with the capacity to remain under water for a week, the Dolphins are cruising in the Eastern Mediterranean, the Red Sea and the Persian Gulf, ready on twenty-four hour alert for a nuclear attack.

The United States, which have already supplied Israël with more than 350 F-15 and F-16 fighter-bombers, are currently delivering at least 75 F-35 fighters, which also have both conventional and nuclear capacity.

The first squadron of Israëli F-35’s became operational in December 2017.

Israël Aerospace Industries produce wing components which make the F-35’s invisible to radar. With this technology, which will also be applied to Italian F-35’s, Israël is potentiating the attack capacities of its nuclear forces.

Extract from a mail by the ex-Joint Chief of Staff, then US Secretary of Defense, Colin Powell

Israël, with 200 nuclear weapons permanently aimed at Iran, as was indicated by ex-US Secretary of State Colin Powell in 2015 , is determined to maintain its monopoly of the Bomb in the Middle East, by preventing Iran from developing a civil nuclear programme which might one day enable the construction of nuclear weapons, a capacity which is today possessed by dozens of countries throughout the world.

In the cycle of the exploitation of uranium, there is no clear line between civil and military use of fissile material.

In order to block the Iranian nuclear programme, Israël is determined to use whatever means it can. The assassination of four Iranian nuclear scientists between 2010 and 2012 was most probably the work of Mossad.

Israëli nuclear forces are integrated in NATO’s electronic system, in the framework of the « Individual Cooperation Programme » with Israël, a country which is not a member of the Alliance, but has a permanent mission at the Alliance’s headquarters in Brussels.

According to the plan tested during the USA-Israël exercise Juniper Cobra 2018, US forces would arrive via Europe (especially from bases in Italy) to support Israël in a war against Iran , a war which could start with an Israëli attack on Iranian nuclear sites, like the one made on the Iranian site of Osiraq.

The Jerusalem Post confirms that Israël possesses non-nuclear anti-bunker bombs, which can be used particularly with the F-35’s, able to hit the Iranian nuclear site at Fordow.

But Iran, although it has no nuclear weapons, has a military riposte capacity, which Yugoslavia, Iraq and Libya did not possess at the moment of the attacks by the USA and NATO. In this case, Israël could use a nuclear weapon by triggering a chain reaction causing unforeseeable results.