Israel has been in the planning since the late 18th century, way before World War 2 – a war that was orchestrated by Zionist Jews in order to 1) favor their fellow Jewish bankers who stood to make a “killing” loaning money to Western Governments to wage war, and 2) finally give birth to Israel.

And what’s with this “act of reparation” business? Stealing another people’s country in the Middle East, which had nothing to do with what was going on in Europe at that time, is what you call act of reparation? Is that your sense of justice?

Besides, who’s going to pay acts of reparation to the Palestinians for what they have suffered at the hands of the Jews? Who?

Modern-day Zionist Israel is NOT the Israel of the Bible because it is comprised of converted Jews and not of Hebrews with whom God had the Old Covenant.

“It is certain that there is no ethnic or racial continuum between the Biblical Israelites and the (Ashkenazic) Khazarians who lead the Jewish state.” – Gilad Atzmon, Jewish writer and musician 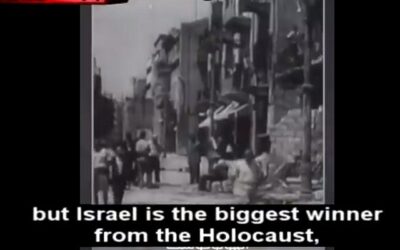 Israel was founded in 1948 on the stolen land of Palestine by Ashkenazi Zionist terrorists, impostors, and racists, pretending to be Hebrews.

They had lost their homeland Khazaria and were in search of a new land. So they flooded into Palestine before, during, and after World War 2.

Once on the ground, they created many terrorist groups such as the Irgun, the Stern gang, and Haganah, then terrorized, killed, and displaced the Palestinian population. Said dispossession is known as the Nakba.

Subsequently, these non-Semitic, non-Hebraic, non-Israelite, Ashkenazi Zionist Jews, who are not the descendants of Abraham, renamed the land Israel in order to reinvent themselves as Hebrews and hoodwink gullible Christians in the West.

Street apartheid in Israel: Racist Jews walk on the wide side, Arabs on the cramped side

However, countless Palestinians were massacred, with a great many dispossessed of their land.

The majority of those who still inhabit the country are segregated and treated like animals in the ugliest form of apartheid yet, while millions more are currently refugees in neighboring Arab countries, waiting to go back to their stolen homes.

Zionist Jews, who claim that Palestine belongs to them, are simply barefaced impostors and liars pretending to be Hebrews in order to steal Arab lands.

They can’t possibly contend that Palestine, which they have stolen under biblical pretense, is their Abrahamic inheritance.

The Israelis love to muddy the water in order to take the focus away from the fact that they’re not Hebrews (all Hebrews are irrevocably dead) and have no right to the land of Palestine, a country they’ve stolen and destroyed.

They also impose on the world their psychotic Islamophobia and unabashed Hebraic pretense, as well as creating all sorts of malicious lies and satanic-inspired false flag terrorism, in order to choke the truth and lure the weak-minded into looking over there (Palestinians???) and not over here (Jewish impostors and terrorists!!!). See Israel Is The Problem.

Unfortunately, a large number of people, especially brainwashed Christians, swallow the bait hook, line, and sinker, and consequently fail to see the following:

a) modern Israel is not comprised of the 10 Hebrew tribes like in scriptures; b) the country’s current geographical demarcation is not as delineated by God in the book of Joshua; c) the nation would be called Judah instead of Israel, with the Levites sheltered therein, if Jews today were of the tribe of David; and d) the modern impostor state of Israel is made up of Jewish converts who are not Semitic descendants of Abraham.

However, Palestinian Arabs are Semites, descendants of Abraham; and therefore rightful inheritors of the land, not converted Jews.

ISRAEL: SCOURGE OF THE WORLD

In stealing Palestine, the Zionists didn’t just hurt the Palestinian people, they scarred the world as well, are scarring it now, and will probably continue to do so until the world puts an end to it.

World War 1: Britain was losing the war against Germany. The Zionists stepped in and bribed President Wilson to get the US into the war to help them.

In return, the Jews asked the British Empire to deed them Palestine to create Israel. Their wish was granted in the form of the Balfour Declaration of 1917, which cost the world 18 million dead.

During that same period, the Jewish Bolsheviks, who took over the Russian government in the 1910s, killed 66 million Christians, including 200,000 members of the Christian clergy, and destroyed 40,000 churches.

World War 2: The Zionists fomented that war (just like they’re doing today with Iran and other countries in the Middle East), so that European Jews could feel threatened.

The deception worked as European Jews fled in droves to Palestine and took over the homes of Palestinians, who were evicted at gunpoint and then either massacred or driven out of their land into neighboring Arab countries. With enough Jews on the ground, Israel was created in 1948 at a cost of 80 million dead.

World War On Terror: Jewish neocons, in cahoots with their bought-and-paid-for politicians in the US government, perpetrated their act of terrorism on 9/11. Then they conveniently blamed it on Muslims so as to obtain a green light to destroy the Middle East using the armies of the US and NATO and the terrorist groups they finance, with the ultimate view to creating Greater Israel. So far, the death toll is 27 million, including Christians.

World War 3: With Russia protecting Syria and Iran from Israel’s Machiavellian design, will the Zionists succeed in bringing the world once again to the brink of disaster to create Greater Israel? If they do, will it instead bring about their downfall?

As befitting the deceivers and murderers that they are, the Zionist VICTIMIZERS of the world shamelessly camouflage themselves as VICTIMS, with Israel, their monstrous spawn, carrying on their blood-filled legacy. Indeed, apartheid Israel is a scourge, a cancer that needs to be dealt with.

Through deceit and bribery Israel’s devilish minions exercise a malevolent, pernicious, and insidious influence on the Church and on the US Government in order to keep Israel’s faulty foundation from crumbling.

“That stranglehold has got to be broken or this country is going down the drain,” explained Evangelist Billy Graham to President Nixon.

Unfortunately, once word got out that Billy Graham said that he shamelessly backtracked from the truth. “That stranglehold” he spoke of has injected a mortal dose of the anti-Christ venom in the Church and in America.

However, we cannot rely on the likes of Mr. Graham to biblically clarify things, since political expediency and popularity trump truth in their circle.

Therefore, we have endeavored through various articles to 1) explain the non-biblical and sordid origin of the Modern Zionist State of Israel, 2) look into the non-Hebraic ancestry of those who today are known as Jews, and 3) lay out the implications thereof. (see links of Articles below)

God willing, our undertaking will help people everywhere snap out of the miasmatic, trance-like stupor that has rendered them gullible, weak, and ineffective in the face of Zionist machinations.

“They shall raise their voices against the serpents (or malicious ones)…” Mark 16: 17

Israel is a country that is revved up by the anti-Christ spirit of “Hate Thy Neighbor.” It has repudiated the Prince of Peace’s message of neighborly love and peace, and has embraced the genocidal spirit of conquest, terror, and subjugation.

The following quote should bring into sharper focus what modern-day satanic Israel represents, and why we’re following God’s command to raise our voices against it:

“Our race is the Master Race. We are divine gods on this planet.

We are as different from the inferior races as they are from insects. In fact, compared to our race, other races are beasts and animals, cattle at best. Other races are considered as human excrement.

Our destiny is to rule over the inferior races. Our earthly kingdom will be ruled by our leader with a rod of iron. The masses will lick our feet and serve us as our slaves.” – Menahem Begin, 6th Prime Minister of Israel’s speech to the Knesset (24 June 1982), Quoted in “Begin and the Beasts” Amnon Kapeliouk, in The New Statesman (25 June 1982)

Appeal: Every conscientious individual should implement a personal boycott of Israel and everything made there.