DR. WALTER HIXSON 2019 MAY
Here’s a BIG boo boo: He says:  “The early Zionist leaders (?) bore the psychic scars and traumas of the bloodlands of East Central Europe from which they came.
They carried the terrible burden of the Nazi genocide that took the lives of their family members and some six million Jews.”

Is he kidding?  Is he misinformed or is he misleading? I see this a lot. Some historian or journalist has got everything right, and then they flop when it comes to the holocaust. Why is this? The early Zionist leaders were Rothschild Zionists, the first president being Chaim Weizmann. And who doesn’t know by now that there was no such 6 million Jews ‘exterminated’ in the holocaust?
International Red Cross Document confirms that 271 thousand people died in the German Concentration camps during World War 2. Not 6 million Jews.
271 Thousand is a lot less than 6 million. And they weren’t all Jews. Churchill ended up slaughtering almost 90,000 German civilians.

Chaim Weizmann, a Zionist leader and Israeli statesman who served as President of the Zionist Organization and later as the first President of Israel. Nice chap, eh? These leaders were Satanic Rothschild’s chosen ones. They did not suffer, they caused suffering! 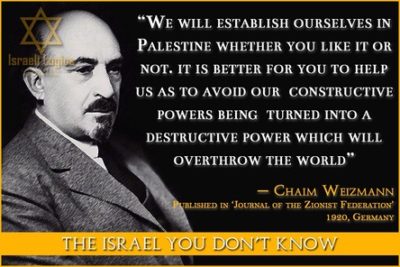 Another example is David Talbot’s Devil’s Chessboard. The whole book goes well until he get to the holocaust where one would think he is adverting the official version on the Zionist’s behalf. It’s remarkable.

A few excerpts from Talbot’s book:

Perhaps not surprisingly, then, when young Allen Dulles was serving in the U.S. embassy in Turkey, his first overseas posting after World War I, he fell for the most notorious anti-Jewish fabrication in history.

One day the young American diplomat was given a copy of The Protocols of the Elders of Zion by a British reporter who had fished the scurrilous document out of a secondhand bookstore in Istanbul’s old European quarter.

By the time Dulles got his hands on the book, which was the creation of the Russian czar’s anti-Semitic secret police, the document had been widely denounced and discredited. [‘Discredited’ by the Jews! More accurately put, denied. There’s no proof or disproof. The proof is in the pudding.] But Dulles took it seriously enough to send a coded report about the secret Jewish “plot” back to his superiors in Washington.

When Schulte heard about the unfolding horror at Auschwitz, he knew he had to act.

From what he could piece together, the macabre display of German efficiency overseen by Himmler that day was part of an official policy of mass extermination that was now under way in the ‘Nazi empire’. (That’s a stretch!)

The policy had been formally approved earlier that year by the Nazi high command at a conference held on January 20, 1942, in an SS villa on Lake Wannsee in suburban Berlin. [There might have been a conference but it was not to concoct the ‘final solution’ by the Jews account.]

The Wannsee Conference, run by Himmler’s ambitious deputy Reinhard Heydrich, laid out a plan [This is false, no document or oral account was never found for a plan to ‘exterminate Jews] for the elimination of Europe’s Jewry through a network of death factories.

By lending the proposal a legal veneer, Heydrich assured the complete administrative cooperation of the German bureaucracy.

Even the title assigned to the program of mass butchery—the Final Solution— conjured a civil servant’s dream of a job well done.

Heydrich, who called himself “the chief garbage collector of the Third Reich,” saw his gas ovens as a humane solution to the “Jewish problem.” [NO GAS OVENS]

He considered himself a cultured man. The night before he was assassinated by Czech partisans, who threw a bomb into his open car as it slowed for a hairpin curve, Heydrich attended a performance of a violin concerto written by his father, Richard Bruno Heydrich, a highly regarded German opera singer and composer.

The Final Solution [part of the false Jewish narrative] was meant to remain secret, with most of the death camps located in remote outposts of the Nazi empire. But as the systematic killing got under way, many people became aware of the mounting barbarity.

One day in early 1942, an IG Farben official named Ernst Struss was returning home on a train after inspecting the company’s factory that was affiliated with Auschwitz. A German worker also riding on the train began talking loudly about the nightmare at the camp.

Great numbers of people were being burned in the compound’s crematoria, he said. [No crematorias were ever discovered OR mass graves at Auschwitz!] The smell of incinerated flesh was everywhere. Struss jumped up in a rage.

“These are lies! You should not spread such lies.” But the worker quietly corrected him: “No, these are not lies.”There were thousands of workers like himself at Auschwitz, he said.“And all know it.”  And there’s more, he devoted mush time in this book propagating the false Holocaust narrative. It’s no wonder to me the jewish publishers put him on top! 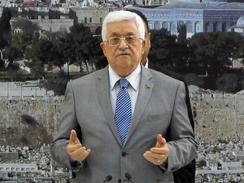 Who’s that standing behind Abbas in this photo, lol. I’ve always heard that Abbas is a traitor to the Palestinians.  But he sure knows the holocaust! This is completely accurate!

Mahmoud Abbas wrote his doctoral thesis about an evil Holocaust plot that Zionists were desperate to attract more Jews to Palestine during the 1930s and 1940s.

In order to encourage immigration to Palestine from Europe, Zionist Jews collaborated with the leaders of Nazi Germany to make life unbearable for Jews so that they would flee to Palestine.

Abbas claimed that Zionists collaborated with the Nazis and sabotaged Jewish rescue operations.

This was Abbas’s doctoral thesis, written over many years.

The Holocaust is a story of Zionist Jews against European Jews.

Jews had no love or attachment to the Holy Land. They were content with where they lived; they had no connection to Palestine.

Most Jews had no interest of ever moving to Palestine.

However, a handful of Zionist Jews needed to force European Jews to move in great numbers to make the Jewish State viable.

These Zionist Jews were so hell-bent on their mission, that they thought nothing of instigating the destruction of European Jews to achieve their mission.

Imagine What Zionists Can Do to Arabs

If Zionists could perpetuate the slaughter of their own Jewish brethren, why should anyone be surprised of their treatment of Arabs?

The Zionist Jews were so selfishly consumed by their mission to create a foreign transplant of a Jewish State in the Arab soil of Palestine, that the killing and expulsion of Arabs from the land in the “Nakba” looked like an after-thought after their participation in the annihilation of fellow Jews.

There it is. Simple and true. Historians agree, history and documents prove.

2 thoughts on “Israel Lobby: Lecture Conflicting with The Truth”

31
0
LAGenie Retweeted · Memetic Liberation Front @FreeUrMemes
2 days ago
@wisermann @People1stPlanet Just the act of equating Israel with Jews is itself antisemitic. Israelis are Israelis, Jews are Jews. Learn how a Venn Diagram works & grok the relationship tween the groups.
View on Twitter
4
0
LAGenie Retweeted · Ali Abunimah @AliAbunimah
3 days ago
Sweden’s constitution requires public officials to assist the resistance should Sweden fall under hostile military occupation. But hypocritical Sweden demands that Palestinians greet the occupiers who steal their land and murder their children with sweets and flowers. https://t.co/pri5hOHZ9E
View on Twitter
119
0
Follow @lagenie24