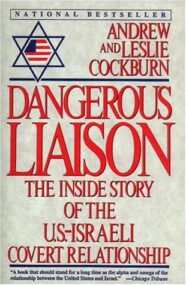 This book shows us how twisted the Israelis are. It’s a must read.

Andrew and Leslie Cockburns 1991 book on Israels relations with the C.I.A is still a valuable book with regard to the reality of the Israeli States involvement in the world at large.

It details a diverse range of issues from the arms deals to Iran which continued seamlessly from the Shah to the Ayatolah, Israeli involvement with the right wing dictatorships of Central America, its collaboration with apartheid era South Africa on weapons programmes (nuclear and conventional), its kidnapping and murder operations overseas as well as spying and industrial espionage in the United States.

Even for the most hardened cynic of Israeli actions (based on a study of reality not prejudice) will be astonished at the sheer opportunism and sickening character of Israeli actions including arms sales and training to Columbian drug cartels.

The nature of the Israeli Arms industry is curtly summed up in the statement of an industry executive bemoaning the “threat of peace” and the end of the murderous wars of Central America.

Other issues involve the Israelis contempt for the sovereignty of other nations – witness the ham fisted murder of a Norwegian waiter of Morrocan origins in front of his pregnant girlfriend and the abduction of the courageous Israeli whistle blower Vanunu from Italy.

There is no limit to the opportunism of the Israeli establishment, “Is it good for Israelis?” seems to be the only measure – morals, ethics are just not in the picture.

Even their closest allies in the U.S. are treated with contempt from time to time for instance the Israelis had intelligence relating to the truck bombing of U.S. personnel in Lebanon in 1983 abut didn’t pass it on.

One looks forward to the day the Israelis are put in their place.

Zionism needs to be crushed.

This book should be essential to anyone interested in the real facts about Israels foreign and covert policies, it is well sourced and includes interesting interviews with many of the figures involved, though perhaps not the best read if you are not familiar with modern Middle Eastern history and Israeli relations with the U.S.