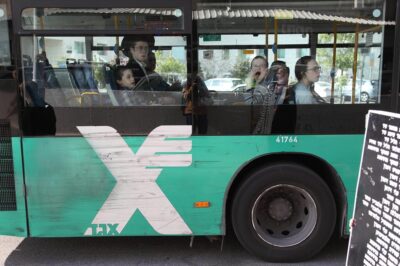 The history and the massacre that took place in Deir Yassin are now buried under shopping centres, bus depots, religious Jewish schools, and a psychiatric hospital in the Orthodox neighbourhoods of Givat Shaul Bet and Har Nof.

The Massacre of Deir Yassin is only a single incident out of so many it’s too much to cover. The Lehi and the Irgun dissolved into the newly established Israel Defense Forces, a citizen’s army, which became Israel’s military backbone. Israel has never gotten worse, it’s never changed. The history and the massacre that took place in Deir Yassin are now buried under shopping centers, bus depots, religious Jewish schools, and a psychiatric hospital in the Orthodox neighborhoods of Givat Shaul Bet and Har Nof. 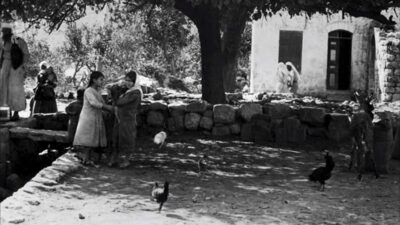 The majority of the massacre victims were women, children or people over the age of 60, despite claims by the Zionist movement at the time that the dead were Palestinian fighters who attacked the militia as they entered the village.

On April 9, 1948, Zionist militias, Irgun and Lehi (a.k.a Stern Gang), attacked the village of Deir Yassin, killing over 100 people including women and children.

Reports stated that the residents of the small village were mutilated, decapitated, disemboweled and raped. [The Lehi and the Irgun dissolved into the newly established Israel Defense Forces, a citizen’s army, which became Israel’s military backbone.]

In an article published recently by Israeli newspaper Haaretz, hidden evidence and shocking new testimonies regarding the massacre have been released.

Neta Shoshani, an Israeli filmmaker who has been researching the history of the massacre, entitled her most recent film “Born in Deir Yassin”.

Shoshani interviewed and gathered testimonies from people who were present during the massacre, and evidence from Israeli archives that are hidden from the public. 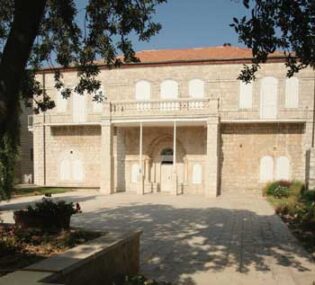 April 10, 1948 – Dar El Tifl Orphanage & School, East Jerusalem. “In April 1948, Hind al-Husseini [1916-1994], a 31-year-old teacher, came across 55 young orphaned children—most under the age of nine—wandering near the Church of the Holy Sepulchre in Jerusalem. They were survivors of the massacre in the Arab village of Deir Yassin. Husseini immediately rented them two rooms. Subsequently, she established an orphanage in her Jerusalem home, a mansion built by her grandfather in 1891… Until Israel recently closed off the West Bank’s access to Jerusalem with walls & checkpoints, Dar al-Tifl al-Arabi (“The House of the Arab Child”) was the largest Palestinian orphanage, serving over 1500 pupils. Today, it stands virtually empty.

She showed the evidence to the Israeli Newspaper Haaretz. The film shows “A young fellow tied to a tree and set on fire. A woman and an old man shot in the back. Girls lined up against a wall and shot with a submachine gun.”Among those who testified was Yehuda Feder, former member of Lehi. “In the village I killed an armed Arab man and two Arab girls of 16 or 17. I stood them against a wall and blasted them with two rounds from the Tommy gun.” Who was responsible for Israel’s 1967 massacre? He told Shoshani, adding “We confiscated a lot of money and silver and gold jewelry fell into our hands.”Former Jerusalem commander of Lehi, Yehoshua Zettler, said “They took dead people, piled them up and burned them.”, and described the residents of the village saying “they ran like cats.” 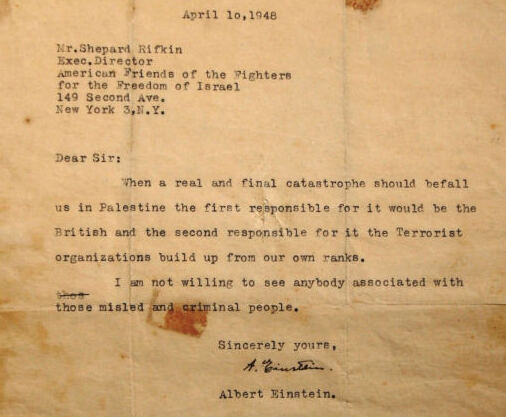 April 10, 1948 – “The Stern Gang received money collected under the name [of the] American Friends of the Fighters for the Freedom of Israel. Mr. Shepard Rifkin was executive director after the UN Partition of Palestine & prior to the creation of Israel in May 1948. Rifkin solicited Albert Einstein to help the Stern Gang raise American money for arms to drive out the Arabs & help create a Jewish state. On April 10th, the day after the infamous massacre of Arabs at Deir Yassin, Einstein replied calling the Stern Gang terrorists & misled criminals.” Text of Einstein’s letter: “Dear Sir: When a real and final catastrophe should befall us in Palestine the first responsible for it would be the British and the second responsible for it the Terrorist organizations build up from our own ranks. I am not willing to see anybody associated with those misled and criminal people. Sincerely yours, Albert Einstein.”

The attackers cut through the village using explosives, blowing up houses, and “within a few hours, half the village wasn’t there any more” said Zettler.Mordechai Gichon, before he died last year was a lieutenant colonel in the Israeli army; a Haganah intelligence officer at the time. He was sent to Deir Yassin after the massacre. “When the Cossacks burst into Jewish neighborhoods, then that should have looked something like this,” he said – comparing Deir Yassin to Jewish pogroms. “My impression was more of a massacre than anything else. If it is a matter of killing innocent civilians, then it can be called a massacre.” He told Shoshani.Yair Tsaban, a member of the Youth Brigades at the time, was sent to bury the corpses in fear of the Red Cross showing up “at any moment, and it was necessary to blur the traces [of the killings] because publication of pictures and testimonies about what had happened in the village would be very damaging to the image of our War of Independence.”Tsaban stated that during that process, he did not at all encounter a corpse of an armed man but “mostly women and old men.” He also testified to seeing civilians shot in the back, “An old man and a woman, sitting in the corner of a room with their faces to the wall, and they are shot in the back.”A member of the Information Service of the Haganah at the time, Shraga Peled, told his story Personally to Shoshani. “When I got to Deir Yassin, the first thing I saw was a big tree to which a young Arab fellow was tied. And this tree was burnt in a fire. They had tied him to it and burned him. I photographed that.” Peled was sent to document the events, and later gave the film to his superiors. He hasn’t seen it since then.Also hidden in Israeli archives, and featured in Shoshani’s film, is a scene of orphaned children whose parents had been killed at Deir Yassin. This, along with a mammoth amount of looted and hidden history, remains in the Israeli military’s archives. Shoshani’s petition against hiding the archives, which was supported by Haaretz, was rejected by Israel’s High Court and finally by the Supreme Court in 2010.

“The state explained that publication of the pictures was liable to damage the state’s foreign relations and the ‘respect for the dead,” stated Haaretz.

The Massacre of Deir Yassin is only a single incident. Seventy years of history remain censored by the state of Israel. 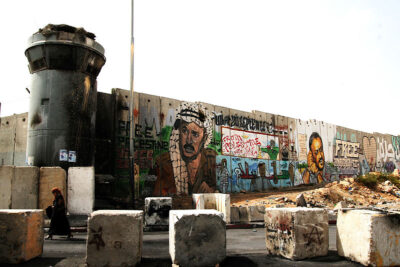 Today: Getting into Palestine:

Both Palestinian territories – the West Bank and Gaza – are confined by a large, military separation wall which allows Israeli forces to control what, and who, goes in and out. If you wish to enter or exit either of the territories, be you foreign or Palestinian, you will first have to successfully pass through checkpoints controlled by the Israeli military.

There are no direct flights to either the West Bank or Gaza. In 2000 the airport at Qalandia was closed for civilian travel and the Israeli Defence Forces took over control.

Instead, you must fly to either an Israeli airport or that of a neighbouring country (such as Jordan) before entering via an Israeli checkpoint.

Flying to Ben Gurion airport in Tel Aviv, Israel is the fastest, ‘easiest’ way to enter either the West Bank or Gaza. However, the vast majority of Palestinian nationals possess only a green identification card and not a blue one. This forbids them from entering any area now considered to be Israel. Therefore, most Palestinians living in the West Bank that wish to travel must do so via Jordan.

LAGenie Retweeted · Enrique 🇨🇱🐈⏳ @Garou_Hidalgo
5 hours ago
This video destroys US lies by using US experts as evidence.

US Secretary of State, Mike Pompeo, talking about Venezuela today
“It’s time for Maduro to go”
#Venezuela https://t.co/Ev8fukGyxz
View on Twitter
67
0
LAGenie Retweeted · Syrian Girl 🇸🇾 @Partisangirl
6 hours ago
What do you do if Bill Gates tries to inject you with the ID2020 microchip? https://t.co/RqQt6aSxVZ
View on Twitter

I'm pretty sure all of the countries that have had the US force "freedom and democracy" upon them through violent bombings and government overthrows would beg to differ...
https://t.co/BEHBLR64Zk
View on Twitter
65
0
LAGenie Retweeted · Caitlin Johnstone ⏳ @caitoz
1 day ago
Good thread compiling the many, many authoritarian measures which governments around the world have implemented and are preparing to implement to deal with the virus. https://t.co/cZ3KnMzdPp
View on Twitter
125
0
Follow @lagenie24