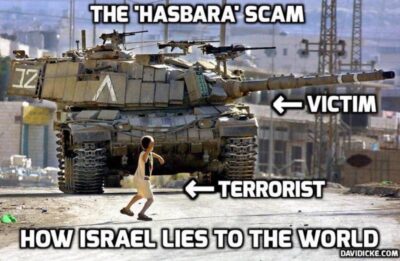 The Islamic Jihad rocket streaked out of Gaza and through the night sky towards the greater Tel Aviv area.

Within seconds it had been detected by Israeli radar and a computer system began furious calculations based on the rocket’s trajectory, speed, and type.

The computer’s conclusion flashed a moment later across the screen of Itai Aizenkraft, a 21-year-old lieutenant in the Israeli Air Force: the rocket was going to crash into a civilian neighborhood.

Lt Aizenkraft gave the order and an Iron Dome battery outside Tel Aviv roared to life, firing an interceptor missile to bring down the incoming rocket.

“The whole thing was over in a matter of seconds,” he said afterwards.

No other country in the developed world is shot at as often as Israel. Around 1,300 rockets were fired from Gaza last…

Lies That Hamas Has Been Firing Rockets at Israel

“the Israeli government presented no evidence that rock-throwing and other violence by some demonstrators seriously threatened Israeli soldiers across the border fence.” 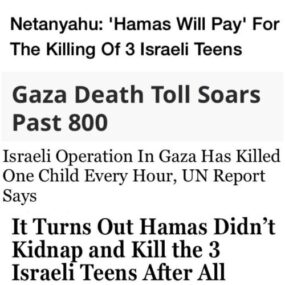 The New York Times claims that, until the demonstrations began in Gaza last month, Hamas had been firing “a fairly steady tempo” of rockets at Israel. In fact, it had been firing none.

On March 30, fourteen peaceful demonstrators were killed and hundreds wounded when Israeli soldiers fired across the border fence at unarmed Palestinians in Gaza.

The day of the crime, New York Times reported that, although the protests were “billed as the start of a peaceful, six-week sit-in”, Palestinian protesters had “quickly turned violent”.

The Times added, “But as some began hurling stones, tossing Molotov cocktails and rolling burning tires at the fence, the Israelis responded with tear gas and gunfire.”

Three days later, the editorial board of the Times acknowledged that the claim that Palestinians were “hurling stones, tossing Molotov cocktails and rolling burning tires at the fence” was the “Israeli version of events”.

In other words, the Times tacitly acknowledged that it had presented the Israeli propaganda version — in which the violence was instigated by the Palestinians — as though truthful.

By contrast, as Human Rights Watch noted, “the Israeli government presented no evidence that rock-throwing and other violence by some demonstrators seriously threatened Israeli soldiers across the border fence.”

Rather, “The high number of deaths and injuries was the foreseeable consequence of granting soldiers leeway to use lethal force outside of life-threatening situations in violation of international norms, coupled with the longstanding culture of impunity within the Israeli army for serious abuses.”

The Times hasn’t been faring any better with its reporting on Gaza since. In fact, it gets worse.

In an article published as “News Analysis” on April 15, David M. Halbfinger wrote in the Times about Hamas’s attitude toward such non-violent resistance.

Under the headline “Hamas Sees Gaza Protests as Peaceful — and as a ‘Deadly Weapon’“, he characterizes Hamas as presenting a mixed message, supporting peaceful protests while routinely engaging in violence. He writes:

To its rockets Israel had responded with the Iron Dome antimissile system. To its tunnels Israel was answering with a $2 billion reinforced-concrete wall buried deep underground.

And on Sunday, Israel said it had uncovered and destroyed the longest operational tunnel yet from Gaza.

It was no surprise, then, that after a grass-roots idea for a peaceful, long-lasting protest along the Gaza fence started gaining widespread support, Hamas brought a halt to what had been a fairly steady tempo of rocket launches into Israel and threw its considerable organizational might behind the demonstrations.

That is a lie.

Hamas had not been routinely launching rockets into Israel until the protests began.

Hamas had not been firing rockets into Israel at all.

According to the Israel Defense Forces (IDF), 25 rockets fired from Gaza struck Israel in 2015, and 15 rockets in 2016. The IDF itself identified none of those rockets as having been fired by Hamas.

In 2017, according to the IDF, 35 rockets and mortars were fired at Israel from Gaza. Most of them, about 30, had been fired in the very last month of the year, after US President Donald Trump on December 6 said Jerusalem was Israel’s capital (even though East Jerusalem is under international law “occupied Palestinian territory”, and for the US to move its embassy there would be illegal).

About half of them landed inside Gaza.

The IDF also acknowledged that these rockets were not being fired by Hamas. Rather, as the Israeli daily Haaretz reported, the IDF attributed the attacks to “the desire by Islamic Jihad and other Salafi organizations to thwart the planned reconciliation between the Palestinian Authority and Hamas”, as well as Islamic Jihad’s “desire to avenge Israels destruction of a cross-border attack tunnel in October that killed 12 of the organizations operatives.”

The Zionist regime presents no evidence to back most of it’s claims. The world is to rely solely on it’s say so.

See, Hamas has actually long been trying to suppress the very rocket attacks the New York Times would have you believe it was responsible for routinely until the Gaza protests. Hamas and the Salafi groups firing these rockets are actually at odds with each other.

Of course, Israel holds Hamas responsible for any rocket attacks — even though it knows that Hamas isn’t the one doing it.

This has been the situation for quite a long time. Every serious observer knows this. Halbfinger is the Times‘ Jerusalem Bureau Chief. He cannot not know this.

Data for this year isn’t so easily obtained. But according to the list compiled at Wikipedia, there were six rockets fired in January and five or more in February.

According to the list compiled by the Jewish Virtual Library, there were four rockets in January and one in February.

Pointing out the low number of rocket attacks is not to trivialize their seriousness. Indiscriminate rocket attacks on Israeli civilian population centers are a war crime. T

he point is that the Times‘ claim that there had been “a fairly steady tempo” of rocket attacks until the Gaza protests started last month is at best misleading. And the Times‘ insinuation that rockets that have been fired were fired by Hamas is also maliciously false.

Compare the Times‘ claim with the acknowledgment from Michael Kaplow writing last week in the Pittsburgh Jewish Chronicle that “Hamas has not fired a rocket in 14 months”.

I would challenge Kaplow even to support his implication that Hamas fourteen months ago was responsible for firing rockets at Israel; but regardless, it puts the lie to the Times‘ claim that Hamas had been steadily raining down rockets on Israel until the demonstrations began last month.

The falseness of the Times‘ claim also goes to the broader propaganda purpose of the article.

What the Times won’t tell you is that, actually, it is Israel that has routinely violated its ceasefire agreements with Hamas — including the ceasefires in place prior to its major operations “Cast Lead” (2008-2009), “Pillar of Defense” (2012), and “Protective Edge” (2014).

Hamas has also since 2005 expressed its acceptance of a Palestinian state alongside Israel within the 1949 armistice lines (a.k.a. the 1967 lines or “Green Line”).

And there is a great deal more about Hamas, and the Israel-Palestine conflict in general, that the Times does not disclose to its readers.

This kind of information isn’t reported — and lies like the above are reported — because the media fulfill the self-designated purpose of manufacturing consent for the US policy of supporting Israel’s crimes against the Palestinians.

For more information about the reality of the situation as compared with how the New York Times and other mainstream media sources characterize it, read my book Obstacle to Peace: The US Role in the Israeli-Palestinian Conflict. If you want to learn what to expect inside its pages, you can read the entire first chapter, “The Rise of Hamas in Gaza”, for free.