On June 3, researchers from Israel’s Tel Aviv and Ben-Gurion universities presented a report, commissioned by the environmental organisation EcoPeace Middle East, in which they warned that “the collapsing water, sewage and electricity infrastructure in the Gaza Strip pose a material danger to Israel’s groundwater, seawater, beaches and desalination plants.”

What the Israeli report does not mention is that beyond sewage and rubbish problems, Gaza is also suffering from a variety of other environmental disasters, which are again linked to the Israeli occupation and aggression against the Palestinians.

The Israeli army regularly sprays herbicide on Palestinian arable land close to the fence separating the besieged territory from Israel. The chemical it uses most often is glyphosate, which has been proven to cause cancer.

According to the Red Cross, these activities not only damage Palestinian crops but also contaminate the soil and water.

Israel’s repeated bouts of heavy bombardment of the Strip have also contributed to pollution. There is evidence that the Israeli army has used depleted uranium and white phosphorus in its assaults on Gaza, which not only cause immediate harm to civilian populations but also remain a source of health risk long after the bombardment has stopped. 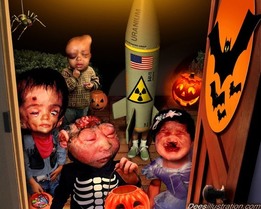 Depleted Uranium and its effects on conquered people of the wars for Israel.

Likewise, weapons used in Israeli military operations have contaminated the environment in Gaza with heavy metals like tungsten, mercury, cobalt, barium, and cadmium, which are known to cause cancer, birth defects, infertility, etc.

That Israel, which prides itself on supposedly “making the desert bloom” is responsible for a major environmental disaster in that same “desert” is hardly surprising.

Given that it is a settler-colonial project, the (over)exploitation of the colonised land to the detriment of the environment and the local population is naturally a part of its modus operandi.

Indeed, all the land Israel has taken and occupied has suffered from environmental degradation in one way or another, with its harmful effects being conveniently shifted towards Palestinians land, villages and cities.

Israel’s aggressive settlement-building practices have not only uprooted, segregated and dispossessed hundreds of thousands of Palestinians, but have also harmed the environment.

They have led to excessive consumption of water, which has not only diminished significantly the access to water for Palestinians – leading some to talk about “water apartheid“, but it has also depleted water resources in general.

Aggressive use of water for agriculture – much of it run by illegal settlers in the West Bank – has led to the depletion of aquifers and a sharp decline in water levels in the Sea of Galilee and the Jordan River.

Israel is also polluting Palestinian land by literally using it as a dumping ground. It has been estimated that some 80 percent of the rubbish generated by Israeli settlements is being dumped in the West Bank.

Various Israeli industries and the army are also known to discard toxic waste on Palestinian land.

Furthermore, over the past few years, Israel has systematically moved polluting factories to the West Bank.

It has done so by building so-called “industrial zones” which not only use cheap Palestinian labour, but also release their toxic byproducts into the environment without regard to the wellbeing of Palestinians living nearby.

This strategy, meant to sever the connection Palestinians have to their land, has not only resulted in the loss of livelihood for thousands of Palestinian farmers, but also caused soil erosion and accelerated desertification of parts of occupied Palestine.

All of these activities damaging the environment in which the Palestinian people live are accumulating over time.

Today they are endangering Palestinian lives, but tomorrow they will threaten Israeli lives as well.

If Israel continues to treat the issue as a “security problem” it will never get resolved because at the heart of it is the destructive logic of a colonial enterprise which seeks to exploit both land and people with no regard for nature and human wellbeing.

In other words, Israel will never achieve security – environmental or otherwise – as long as it continues to oppress the Palestinians, occupy their land and ravage the environment. Israeli air, water and overall environment will never be immune from the Israeli-made disasters in occupied Palestine.