“The Israeli cable car project is an obscene violation of the cultural, historical, spiritual, geographic & demographic character of Jerusalem,” Ashrawi said via Twitter.

Palestinians in Silwan, an East Jerusalem neighborhood at the foot of the Old City, said it would encourage tourists to bypass them on the way to holy sites. “(It) will give the impression that it is a Jewish city and remove the Palestinian heritage from it,” Silwan resident Khaled Al-Zeer said, adding that “the foundations of the project will be built on our land”.

JERUSALEM (Reuters) – An Israeli plan to run a cable car over Jerusalem to the walls of the Old City has angered Palestinians who say it would erase their heritage.

The proposed cable car would shuttle some 3,000 tourists and worshipers per hour from Jerusalem’s western part to the Palestinian eastern Old City in a four-minute ride. The plan moved forward this week when a special committee headed by Israel’s finance minister gave it a green light.

A crucial component to challenging Israel’s oppression of the Palestinian people is examining the harmful role of tourism in Israel. Palestinians, wherever they are, are denied the freedom to move freely to and within their homeland by Israel.

At the same time, Israel cultivates a tourism industry that quite literally erases Palestinians from the landscape and history, appropriates Palestinian culture and cuisine, and whitewashes the reality of Israel’s state violence.

A World Bank report has warned that the crisis-plagued Palestinian economy is being stripped of billions of dollars each year by Israeli plundering in Palestinian territory of key natural resources. 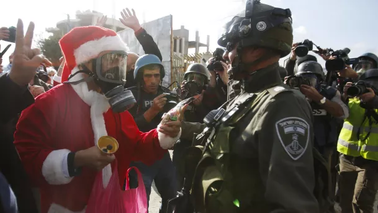 Bethlehem, the birthplace of Jesus, is surrounded by the eight-metre high concrete Separation Wall. This is just one of a number of restrictions on movement imposed by the occupation authorities against Palestinians in the West Bank and tourists wishing to visit the area.

Israel suspended ties with the UN agency for adopting a resolution said to deny Jewish control to the region’s holy sites:

UNESCO  criticized actions taken by Israel, which it refers to as the “occupying Power,” around the holy sites, including restriction of UNESCO experts’ access to sites and actions by Israeli forces against Muslim worshipers. Israel has occupied the West Bank since the war of 1967 and annexed East Jerusalem. This move, however, has not been recognized under international law.

“It is inconceivable that what hasn’t been excavated in 2000 years should be dug into now to implement a project in a moment of distraction that will serve as a badge of shame,” Ben-Dov wrote.

Slamming what he called the planners’ total disregard for the property rights of those likely to be harmed by the cable car, the archaeologist, who was also responsible for excavating the Western Wall tunnels, claimed that construction of the stations would be in “crude violation” of the Antiquities Law, which mandated preservation of excavated sites.