They’re trying to narrow it down to individuals. That’s baloney. This is Israhell official policy. 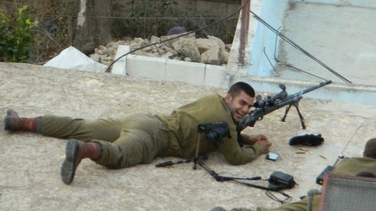 GENEVA: A UN probe released Thursday said Israel have committed crimes against humanity in responding to last year’s unrest in Gaza, as snipers “intentionally” shot civilians including children, journalists and the disabled.

The UN Independent Commission of Inquiry on the protests in the Occupied Palestinian Territory investigated possible violations during demonstrations in the Gaza strip between March 30 and Dec.31 last year.

Commission chairman Santiago Canton said Israeli soldiers committed multiple breaches of international humanitarian law while suppressing protesters who were calling for Palestinian refugees to be allowed to return to their former homes now inside Israel.

“Some of those violations may constitute war crimes or crimes against humanity,” he said in a statement.

Below is video footage of this new weapon technology. Have you seen anything like this before?

A 14-year-old child inhaled an unknown neurotoxin that has left him in a coma.

Health workers were also hit by snipers who shot more than 6,000 “unarmed demonstrators” during weeks of protest, according to the inquiry set up in May by the UN Human Rights Council.

Netanyahu said the rights council, a frequent target of criticism by Israel, had hit “new records of hypocrisy and lies, out of obsessive hatred of Israel.”
Among the most contentious questions surrounding the protests was whether the demonstrators presented a threat to Israeli troops.

Everyone is against us, remember the holocaust!

Netanyahu said on Twitter that “it is Hamas which fires rockets at Israeli civilians, bombs and carries out terrorist activities during the violent demonstrations on the fence.”
But investigators pointed to evidence that Israeli troops targeted Palestinians “who were neither directly participating in hostilities, nor posing an imminent threat.”

The commission also dismissed claims the protests were aimed to conceal acts of terrorism, describing the demonstrations as “civilian in nature”.

“Despite some acts of significant violence, the commission found that the demonstrations did not constitute combat or military campaigns.”
The investigators did not have access to the Israeli military’s rules of engagement.

But, based on publicly available evidence, the commission said there is evidence that Israeli troops have been instructed that they can use lethal force against those who incite others to violence.

The so-called “main inciters” provision is at odds with international law and must be removed from Israel’s rules of engagement, Canton told reporters.

The commission said it conducted 325 interviews with victims, witnesses and other sources, reviewed more than 8,000 documents and looked at drone footage among other material.
Israel did not cooperate with the probe or provide access to Gaza.

Senior Hamas official Bassem Naim told AFP that the panel’s findings had proven that Israel “committed clear war crimes” against peaceful protesters and demanded justice.
Israel has however per usual accused Hamas of using the protests as cover for infiltrations and attacks.

Canton told reporters the commission considered Hamas’s culpability for the bloodshed, but stressed that since the demonstrations were generally peaceful in nature, Hamas was under no obligation to stop them.

“So to put responsibility on (Hamas) for letting those demonstrations happen (is) against international humanitarian law,” he added.
The UN inquiry was in part tasked with identifying individuals who could be prosecuted for international crimes.

The commission declined to discuss specific suspects, but the report calls for the UN human rights office to manage the list of those with possible criminal responsibility and to share that information with relevant courts.

It also calls on states to “consider imposing individual sanctions, such as a travel ban or an assets freeze, on those identified as responsible by the commission.”