Trump calls Ilhan Omar to resign
After outrage over US legislator’s anti-Semitic remarks about AIPAC, president says if she doesn’t step down, she should ‘certainly resign from the foreign affairs committee’ 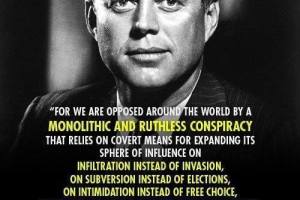 President Kennedy wanted Israel’s foreign lobbies to register as foreign agents but he was assassinated first.

Everyone gets fired if they say ANYthing about Israel or Israel’s interests unless it’s “I love Israel”. That’s all anyone is allowed to say or they get the axe. And to be called to resign by the president?! Doesn’t get any worse than that I don’t think. Our president and everybody else has to jump on it fast and hard to please Israel. Why, what will Israel do? Well that’s not the right question. The right question is who owns Israel and is making up the rules? Someone I read in a comment asked and answered the right question: “Why doesn’t someone just kill all the Rothschild’s already?”

But the Rothschild Zionists leaders in Israel [occupied Palestine] are allowed to make up their own stupid rules. That’s what I think. They are the warriors for Rothchild Satanists. Any other leader on the planet serves Israel, if they are to survive. It doesn’t seem that anyone can do anything about it. But someone could at least tell the Rothschilds and their minnions that they’re not fooling the thinking people anymore.

Trump calls Ilhan Omar to resign
After outrage over US legislator’s anti-Semitic remarks about AIPAC, president says if she doesn’t step down, she should ‘certainly resign from the foreign affairs committee’

It’s all about the Benjamins baby 🎶 https://t.co/KatcXJnZLV

The Washington post wrote:
Why is AIPAC influential?
AIPAC’s influence stems from several factors beyond money, some of which predate its emergence as a lobbying powerhouse in the 1980s.

“It operates in a very favorable political environment. Americans have been sympathetic to and approving of the Jewish-Israeli position over the Arab and Palestinian position for decades. Israel is viewed by a majority of Americans as being close to the United States in cultural, religious and political terms. A swath of the U.S. public views Israel as “like us.” This is also clearly demonstrated by the high levels of support for Israel among the evangelical Christian community.”

Today this is a complete lie! It may have USE TO BE true. Certainly not today since the Israeli war criminals and war crimes and the Zionist 5th column have been outed via the internet and activism.

Philip Giraldi, a former CIA officer, executive director of the Council for the National Interest wrote about AIPAC:

Pro-Israel organization should not get a pass.

The power of the Israel Lobby and of AIPAC is not cost free for the American public. The current $3 billion plus that Israel, with a thriving first world economy, receives in military assistance is on top of the $130 billion that it has received since 1949. Protecting Israel in international organizations like the United Nations has sometimes marginalized the U.S. in such bodies and the lobby’s influence over American foreign policy has often been noted. In 2010 General David Petraeus stated that Israeli policies were putting American military personnel in the Middle East in danger. He quickly recanted, however.

FARA Registration for AIPAC and Congress Is Washington’s Interest
In reality, the security of the U.S. part is a bit of a sham as AIPAC in no way works to strengthen the United States or benefit the American people. Quite the contrary. The bilateral “special” relationship is a one-way street that has done considerable damage to the United States in terms of its international standing and national security.

AIPAC is all about Israel and always has been. Its hundreds of staffers lobby Congress and the White House daily to support legislation and policies favorable to Israel and damaging to its enemies and critics. It works closely with the Israeli government to obtain maximum benefit from the U.S. Treasury and Pentagon, to the detriment of American citizens and genuine national interests.

LAGenie Retweeted · Cynthia McKinney PhD @cynthiamckinney
16 hours ago
Message sent in love to my brothers and sisters in Africa: PLEASE DO NOT TAKE ANY COVID-19 VACCINE. WHY ARE THEY STARTING WITH YOU? DON'T BE GUINEA PIGS FOR ENGINEERED DISEASES FROM THE WEST. https://t.co/wLdpLTfpF4
View on Twitter
261
0
LAGenie Retweeted · Muhammad Smiry 🇵🇸 @MuhammadSmiry
16 hours ago
The occupied PALESTINE https://t.co/TTjilDORNh
View on Twitter

203
0
LAGenie Retweeted · marshall @Marshall_H15
20 hours ago
🛑How would you feel if that was your country?? https://t.co/nPei7QNQol
View on Twitter