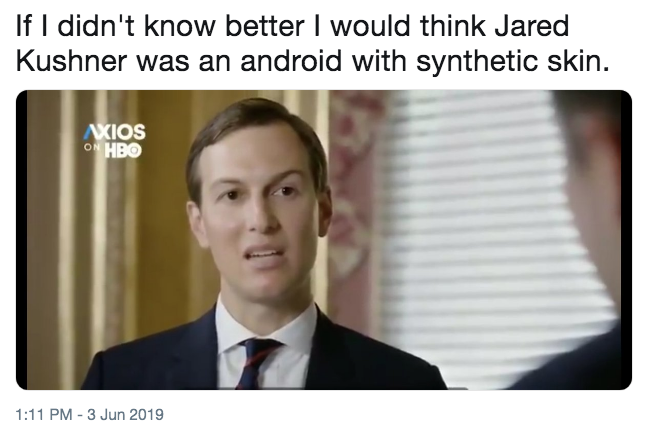 “If you want to go and invest in the West Bank or Gaza,” Kushner insisted, “the issue that’s holding you back is the fear of terrorism and that your investment could be destroyed.”

Well, it could. Remember the greenhouses in Gaza, donated by Germany, bombed by the Israelis? Countries develop their economies best not with foreign investments, but with investments by their own people. And the Palestinians are not allowed to do that. Remember the Wanted 18, the dairy cows who were deemed a threat to Israel’s national security? 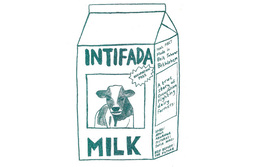 In the 1980s, as part of a Palestinian boycott of Israeli taxation and commodities, residents of Beit Sahour decided to form a collective and stop purchasing milk from Israeli companies, in a quest for greater self-sufficiency. They purchased cows from a sympathetic kibbutznik and set about teaching themselves how to care for the animals and milk them—even sending a member to the United States to learn dairy farming. The farm was a success, with strong local demand for “Intifada milk.”  One day an Israeli soldier came to the farm, took photos of the cows, and told the Palestinians they weren’t allowed to have the cows and gave them 24 hours to shut it down. He said the cows were a threat to Israel’s national security.

All of the irrigation wells used by farmers near the Gaza border have collapsed due to Israel taking the underground water sources through their deep wells. The Palestinians in Gaza are not allowed to dig wells more than 100 metres deep.

In September 2011, the United Nations Office for the Coordination of Humanitarian Affairs (OCHA) said there were 522 roadblocks and checkpoints obstructing Palestinian movement in the West Bank, up from 503 in July 2010. That number does not include the temporary checkpoints known as “flying checkpoints,” of which there were 495 on average per month in the West Bank in 2011, up from 351 on average per month in the previous two years. ”

“Palestinians need help to rebuild, but as soon as they start to get back on their feet, Israel knocks them back down.” Israel’s master plan is to keep them from moving forward.

Gaza Strip – A surge in Israel’s destruction of EU-funded projects in Palestine is linked to the EU’s decision in 2015 to label products made in Israeli settlements in the West Bank, according to a new report.

The report, titled ‘Squandered Aid’ and authored by the Euro-Mediterranean Human Rights Monitor, was disseminated on the sidelines of a recent EU session. The report, of which Al Jazeera obtained an exclusive copy before its release this week, documents Israel’s repetitive destruction of EU-funded projects in Palestine.

“It’s the classic ‘catch-22’,” says Cecile Choquet, a researcher at Euro-Med. “Palestinians need help to rebuild, but as soon as they start to get back on their feet, Israel knocks them back down.”

Demolitions and stop-work orders were particularly directed at structures located in Area C of the occupied West Bank, which falls under Israeli security and civilian control. It is regarded by the international community as the main land reserve for a future Palestinian state. In a single week in August 2015, 63 houses were destroyed, leaving 132 Palestinians homeless.

The surge has attracted international focus. In 2015, 31 human rights groups condemned Israel’s “wanton destruction of Palestinian property and of projects funded by international aid in the occupied West Bank”.

The office of the Coordinator of Israeli Government Activities in the Occupied Territories (COGAT) claimed that “measures are taken against illegal building”. However, Euro-Med reports that, in some cases, Israeli authorities have demolished Palestinian projects they had earlier approved.

Further, permits are scarce, with only as few as 2.3 percent of applications for building permits in Area C approved by Israeli authorities between 2009 and 2012, according to the Israeli rights group B’Tselem.

The Israeli daily Haaretz reported last Tuesday on a “tense and difficult meeting” between Israeli and EU officials, where the EU expressed opposition to home demolitions and forced evacuations of Palestinian populations.

The EU Ambassador to Israel, Lars Faaborg-Andersen, reportedly warned that a continuation of the massive demolition of Palestinian homes in the occupied West Bank “is liable to harm relations between the EU and Israel”.

In accord with Euro-Med observation, Haaretz ascribed the significant increase in demolition activities, especially of construction funded by the EU, to an Israeli attempt to adopt sanctions against the EU in response to the decision to label products from the settlements in European supermarkets and heavy political pressure by right-wing Israeli parliamentarians.

Al Jazeera spoke to Wijnand Marchal, First Secretary for Economic Affairs at the Netherlands Representative Office in Ramallah, who confirmed that Dutch-sponsored projects have been increasingly encountering problems during or after implementation, especially over the last six months.

“We have seen an increase of stop-work orders and demolition orders,” Marchal told Al Jazeera. “In Gaza, the agricultural programmes have [during the latest war of 2014] witnessed the demolition of water wells, greenhouses, and packing houses belonging to cooperatives,” he continued.

During 2015, Dutch projects incurred damages totalling over $230,000 as a result of Israeli enforcement activities. “In case Israeli demolitions of Dutch development projects is continuing, this will have a negative impact on our relations with Israel,” the Dutch diplomat told Al Jazeera.

Euro-Med deplores that since 2012, information on damage to EU-funded projects has been inaccessible to both the media and human rights institutions.

Rami Abdu, Chairman of Euro-Med Monitor, says the report relied primarily on field research, including interviews with eyewitnesses, village councils, municipalities and relevant governmental and non-governmental bodies, as well as past publications and anonymous “tips” made available by diplomats who asked to remain anonymous.

“It might represent an embarrassment to the EU for not protecting its funded facilities properly,” says Choquet of Euro-Med. “Thus, most relevant data are classified.”

In addition, Abdu warns that some in Europe are questioning the wisdom of investing more funds in the occupied Palestinian territories “particularly in light of the austerity measures implemented following the debt crisis throughout the region and the wave of refugees from Syria, Iraq and Afghanistan”.

“At a recent conference in Washington, DC, the president of American Near East Refugee Aid (ANERA), Bill Corcoran, observed that funding from large donors is beginning to dry up due to the realisation that rebuilt infrastructure will likely be destroyed once again,” says Pam Bailey, an international secretary at Euro-Med.

“The response of international agencies is to withdraw funds. But my question is: Why don’t they instead finally take action against Israel, instead of penalising ordinary Palestinians?”

Concluding the report, Euro-Med urged the EU commission to substantively penalise the Israeli government when UN- or European-funded projects are targeted.

“Recently we have seen more interest by our parliament on the challenges facing development projects in the West Bank. Some parliamentarians press for compensation from Israel,” the Dutch Representative Office told Al Jazeera, confirming that they remain even more committed to humanitarian and development assistance to Palestinians.

According to Bailey, Israel’s targeting of EU-funded projects won’t stop “until the EU takes action”.