Our economy suffered an $11 billion loss in the shutdown.
“What does this say about the priorities of the new Congress?” said Carrie Gordon, chair of GPNJ’s communications committee. “Women in the WIC program, families on food stamps, and some federal employees are not getting paid at this time, but the U.S. Senate can think of approving the largest military aid package in U.S. history to assist the state of Israel.” 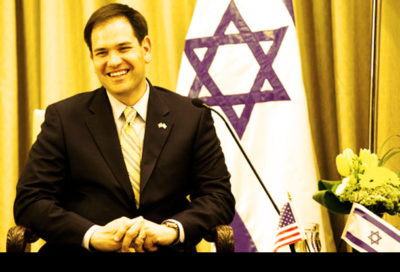 Congresswoman Rashida Tlaib has come out exposing Rubio’s own “dual loyalties” regarding Israel, with Rubio responding with charges on “antisemitism.”

Amid the chaos in Washington DC over the government shutdown, the first bill introduced by the U.S. Senate, entitled S.1 – is not a bill to open the government, but rather an unprecedented law specifically designed to shield the Israeli government from any public criticism or political opposition in the U.S.

The bill was birthed by none other than Florida’s Republican Senator Marco Rubio (pictured above). The anti-boycott law is meant to target the global BDS Movement, which stands for the Boycott, Divestment and Sanctions against the Zionist State of Israel.

Instead, according to multiple sources involved in the legislative process, S.1 will be a compendium containing a handful of foreign-policy related measures, a main one of which is a provision, with Florida’s GOP Sen. Marco Rubio as a lead sponsor, to defend the Israeli government. The bill is a top legislative priority for AIPAC.

In the previous Congress, that measure was known as S.170, and it gives state and local governments explicit legal authority to boycott any U.S. companies which themselves are participating in a boycott against Israel [BDS]. As the Intercept reported last month, 26 states now have enacted some version of a law to punish or otherwise sanction entities which participate in or support the boycott of Israel, while similar laws are pending in at least 13 additional states. Rubio’s bill is designed to strengthen the legal basis to defend those Israel-protecting laws from constitutional challenge.

Punishment aimed at companies which choose to boycott Israel can also sweep up individual American citizens in its punitive net, because individual contractors often work for state or local governments under the auspices of a sole proprietorship or some other business entity. That was the case with Texas elementary school speech pathologist Bahia Amawi, who lost her job working with autistic and speech-impaired children in Austin because she refused to promise not to boycott goods produced in Israel and/or illegal Israeli settlements.

However, preliminary rulings have deemed the bill unconstitutional – something which should engage constitutional Republicans and Libertarians, but thus far little noise has been made in Congress. One reason for the lack of push-back against this legislation is most certainly the power weilded in Washington by the Israel Lobby. In late 2018, 21WIRE reported on the film The Lobby, a four-part undercover investigation into Israel’s covert influence and penetration into US politics produced by Al Jazeera – but subsequently censored and pulled down from online platforms after intense pressure from the US and the Israeli Lobby. The documentary reveals the depth and scope of Israel’s well-financed clandestine operation to buy political influence and control US foreign policy.

In 2016, it was revealed that the war chest for Rubio’s presidential campaign was being managed and bankrolled by Jewish-American billionaire and arch Zionist, Paul Singer. More interesting than this, however, is that it was Singer who funded the initial stages of the now infamous ‘Steele Dossier’ created by the shady private intelligence firm Fusion GPS. The dossier turned out to be a completely fake intelligence report designed to discredit Donald Trump – a project which was then passed on to and expanded by the Hillary Clinton campaign.

Should the bill pass through the Senate and into the Democrat-controlled House of Representatives, it will be interesting to see whether the ruling party can enforce a whip line, with the chief enforcer in this case being newly elected majority Speaker, Nancy Pelosi, a long-time loyal supporter of the apartheid State of Israel, as well as the new crop of ‘Socialist Democrats’ like Alexandria Ocasio-Cortez (D-NY), and more crucially, newly elected Palestinian-American Congresswoman Rashida Tlaib (D-MI). For Washington’s so-called ‘progressives’, the Israeli Lobby’s legislative effort should be regarded as an anathema, as it clearly violates the U.S. Constitution and the First Amendment on free speech.

Already, Talib has come out exposing Rubio’s own “dual loyalties” regarding Israel, with Rubio responding with charges on “antisemitism.”

Tlaib responded saying, “They forgot what country they [US Senators] represent,” and added that, “This is the U.S. where boycotting is a right & part of our historical fight for freedom & equality.”

The results of any House vote will certainly be a revealing test – to see which U.S. representatives will put Israel First, and which ones will opt for putting America First.