Laura Bush insisted that Afghanistan should be attacked because little girls were not allowed to wear nail polish; Colin Powell that President Saddam Hussein should be overthrown because he was involved in the attacks of 9/11; Nicolas Sarkozy that he had to overthrow Muamar Gaddafi because he was going to kill his own people; and Laurent Fabius that President Bashar al-Assad had to be driven out because he did not have “the right to live on Earth”.

According to President Emmanuel Macron, this is about promoting multilateralism that his US counterpart, President Donald Trump, is allegedly destroying.

Is this true? Is that the problem?

On the contrary, the facts suggest that Westerners, including France, have since the disintegration of the USSR taken fundamental action against international law and the United Nations; this Forum is only an opportunity to save the power they have exercised over the rest of the world for four centuries.

To understand what is happening, let’s go back:

President Bill Clinton and his Secretary of State, Madeleine Albright, have patiently rewrote, one by one, all kinds of UN treaties by abandoning the language of international law for that of Anglo-Saxon law.

This “modernization” was not a simple translation.

It is in fact the application of the “Korbel doctrine” aimed at developing all jurisprudence in favour of the Anglo-Saxons [a white gentile of an English-speaking nation. ]

This strategy was pursued by President George Bush Jr. and his Secretary of State, Condoleezza Rice, adopted daughter of Professor Korbel and sister of Madeleine Albright. 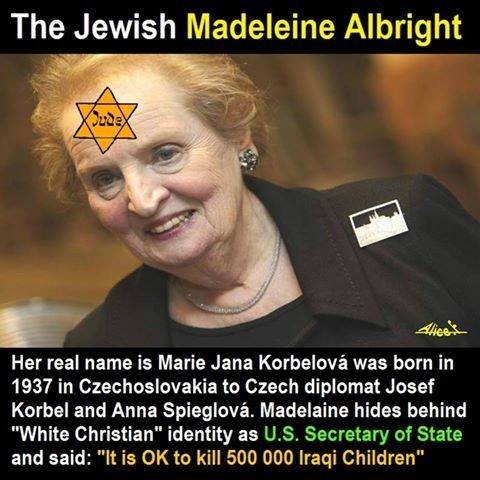 The same Bill Clinton accepted a compromise that was favourable to Israel and had it validated by the Security Council.

There is no longer one State in Palestine based on the egalitarian principle of “one man, one vote”, but two based on the model of the Bantustans of South African apartheid.

Still under the impetus of US President Bill Clinton and also British Prime Minister Tony Blair, the Atlantic Alliance proclaimed itself a “defender of the persecuted”, condemned Bad Serbia, and waged a “humanitarian war” (sic).

Morality had replaced the law allowing NATO to violate it.

The humanitarian argument or the use of human rights do not adequately mask the deep Western contempt for Humanity and Human Rights. 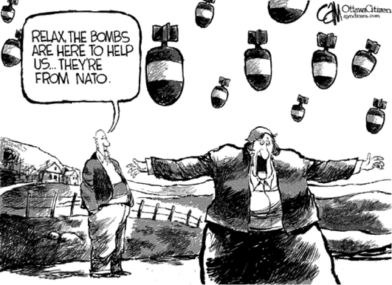 It should be recalled that the Universal Declaration of Human Rights recognizes a hierarchy among them.

It proclaims that the three main rights are “life, liberty and security of the person”.

However, Westerners have restored slavery in Libya and support slave states such as Saudi Arabia.

They also have the worst record of torture, remembering the 80,000 people kidnapped and tortured by the US Navy on boats stationed in international waters at the beginning of this 21st century.

The humanitarian rhetoric, the “right-of-humanism”, is not unlike the way the United Kingdom attacked the Ottoman Empire, allegedly to save the Greeks from its oppression, in reality to control their country: London invited St Petersburg and Paris to recognize Greece’s independence in 1827, and then, on the basis of this recognition and in violation of the rules of the Congress of Vienna, organized a war that became “legitimate” against Constantinople to achieve this “independence”: always maintaining the appearance of respect for the law when it is violated!

Since NATO’s war against Yugoslavia, the UN has gradually faded away. NATO no longer cares what the Security Council and the General Assembly think.

In a few years, in violation of the Charter, the UN’s “intervention forces” have become “peacekeeping forces”.

It is no longer a question of monitoring the implementation of a ceasefire between belligerents, but of imposing a solution on the belligerents – again, sometimes between political parties in the same country. And, to date, NATO is the only military alliance to have been invited to “keep the peace”.

The UN administration itself has moved from serving its members to serving NATO. Thus, its Director of Political Affairs, Jeffrey Feltman, was seen promoting a plan for the unconditional surrender of the Syrian Arab Republic instead of working for peace.

The Western members of the Security Council call themselves Protectors of international law, but far from setting an example, they shamelessly show their disdain when this law is unfavourable to them.

For example, the United Kingdom, which has just declared its sovereignty over the Chagos Islands, including the Diego Garcia base, despite the appeal of legitimate inhabitants, the opinion of the International Court of Justice and the injunction of the General Assembly.

Current international law has its origins in the 1899 Hague Conference. Convened by Tsar Nicholas II, it brought together various powers of the time to consider a disarmament treaty.

But, the Frenchman Léon Bourgeois proposed to settle disputes between States by establishing an arbitration chamber; the only way to prevent wars was to find arrangements that respected the interests of the parties, as is done between civilized individuals.

Unlike a court, an arbitration chamber is not required. It is competent only if both parties recognize it as such in advance.

This Arbitration Chamber was incorporated into the League of Nations (League of Nations) and then into the United Nations. It still exists and is working well, as shown by the current procedure on the resolution of the conflict in the Azov Sea between Ukraine and Russia.

Gradually the League of Nations and then the United Nations were formed. Contrary to popular belief, the failure of the League of Nations is not attributable to the Japanese imperial regimes, Italian fascist and German Nazi, but to the refusal of the United States to sit on it and the refusal of the British Empire to recognize the equality of peoples (despite the Japanese proposal supported by Léon Bourgeois).

For example, the abandonment of international law was pushed a little further with the reform of the Organization for the Prohibition of Chemical Weapons (OPCW) proposed by France.

From now on, in an apparent “concern for efficiency”, decisions will be taken by a simple majority and the Organization will be able to identify guilty parties at the end of its technical investigations.

However, the OPCW was originally a technical agency responsible for verifying compliance by its signatories with the Chemical Weapons Ban Treaty.

It has the power to investigate according to very strict procedures, approved by all signatories, and to establish the facts for the assembly of signatories to judge.

In criminal law, no country in the world accepts that police officers should act as judges and executioners, that they alone should investigate, identify and punish the perpetrators.

Yet this is exactly the aberrant power that the French reform gives to the OPCW. And since this same reform validates decisions by a simple majority of the signatories of the Treaty, this agency becomes an instrument of Western politics. 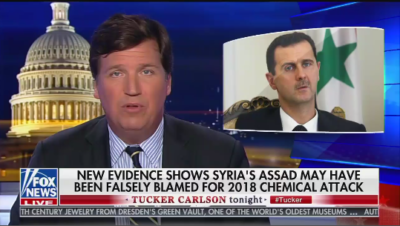 For several years now, Westerners have withdrawn all references to international law in their declarations and communiqués.

On the contrary, they are in favour of “rules-based multilateralism”. What rules? The ones of the strongest.

Moreover, this second Peace Forum (and not for peace) has not been successful. Half as many Heads of State and Government attended as for its first edition .

LAGenie Retweeted · Press TV @PressTV
2 days ago
Palestinian teen loses his eye after being shot by Israeli forces in occupied West Bank
https://t.co/Y7afIgmVKv
View on Twitter
356
0
LAGenie @lagenie24
3 days ago
18 Reasons I Won't Be Getting a Covid Vaccine
Johnson and Johnson Has Paid $BILLIONS in Criminal Settlements and Never Produced a Vaccine Before – Why Would We Trust Them for a New Experimental COVID Vaccine?

https://t.co/UYPusH2kyu
View on Twitter
0
0
LAGenie Retweeted · Caitlin Johnstone ⏳ @caitoz
7 days ago
Everything the western world believes about itself and its values is invalidated by its treatment of Julian Assange.
View on Twitter
1175
0
LAGenie Retweeted · Stop the War @STWuk
7 days ago
This Thursday's meeting will relaunch @STWUK in #Coventry. You are invited to join the meeting and work for an end to Yemeni people's suffering.

-Wife of Osama Mansour, killed today by UK-armed Israeli forces. https://t.co/3IfELPeHcJ
View on Twitter
1068
0
Follow @lagenie24
The true face of "Israel" is one of genocide, ethnic cleansing, land theft, terrorism, human trafficking, racism, torture and supremacism. Anyone who identifies themselves as "pro-Israel" is praising evil.