Netanyahu had hoped to immediately “finish the job” before Israel’s March vote. He also didn’t get his war with Iran via the US HAHA! 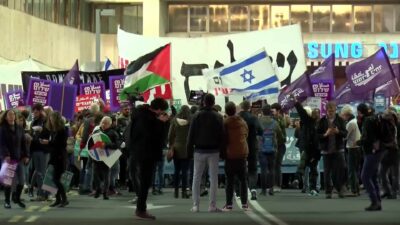 Israelis protest in Israel against the ‘Deal of the century”

US President Donald Trump’s newly unveiled Middle East “peace plan” sparked exceedingly divergent reactions around the world, but also within Israel itself — despite the fact that most see the state of Israel as the big winner in Trump’s latest announcement.

And no one seemed more surprised by that split reaction than Israeli Prime Minister Benjamin Netanyahu himself. In his view, his appearance alongside Trump in Washington and the duo’s collective praise for the US plan should have kicked off the final stretch of Israeli parliamentary elections — the third within one year’s time — that would this time secure the politician’s grip on power, something the prior two elections failed to do.

More than anything, Netanyahu had hoped to immediately “finish the job” before Israel’s March vote, cementing the current status quo in the occupied territories in the West Bank with US approval.

Jewish settlements in the occupied territories are a priority for Netanyahu, who immediately implemented steps to “expand Israel’s sovereignty” on land occupied by Jewish settlers, initiating Israeli annexation of the disputed area.

Netanyahu forced to back off

But Washington called on Netanyahu to pause, saying that such steps could not begin immediately, but were instead contingent upon negotiations and agreements between all parties involved in the matter.

The statement had less to do with Jewish settlers than with Palestinians and Jordanians.

Thus, Netanyahu was forced to back off his plan, despite his calculus that the bold move would translate into political capital for his conservative Likud party.

In his eyes, nothing could facilitate Likud’s political advantage like the the “deal of the century” propagated for three years by Trump and his son-in-law Jared Kushner.

Likud members have discreetly omitted the word peace when speaking of the new plan, for how could a politician like Netanyahu score electoral points with it?

For the past several years, it was Netanyahu who repeatedly and systematically torpedoed every attempt to reach agreement between Israel and Palestinian leaders.

Ultimately, his actions have left the historic Oslo Accords in tatters, a fact that those on the right of the Israeli political spectrum have quietly avoided talking about.

Thus, it appeared that only one thing mattered: Securing US support on points seen internationally as impediments to peace with the Palestinians.

The first point of order on that front was support for Jewish settlements built on Palestinian territories occupied by Israel since the Six-Day War in 1967.

Trump has done much to aid the Israeli cause since coming to office. Most notably, by moving the US embassy to Jerusalem, thereby changing the city’s status, as well as recognizing Israeli sovereignty over the Golan Heights, which Israel annexed from Syria.

It was widely thought that the next phase of the historic project could now be undertaken, something that seemed self-evident to many Israelis.

That clarity of purpose is, among other things, the direct result of the fact that Israelis have been taught — in kindergarten, in school and in the military — to view West Bank territories occupied in 1967 as part of Eretz Yisrael, or the biblical Land of Israel.

Opinion polls show an even split among Israelis who approve and reject the Trump plan. No one can say with certainty if and how that might change ahead of the election on March 2.

Still, if the vote once again fails to provide a clear electoral winner, the peace plan will have to be abandoned. The same must be said if a March victor tries to implement the plan on his own at all costs — as Netanyahu attempted to do earlier this week.