Signs of the appearance of the Dajjal:

People will stop offering prayers
Dishonesty will be the way of life
Falsehood will prevail
Blood of innocents would be shed
The oppressed will be proud of their actions
The rulers will be corrupt and fools
Women will dress like men and men like women
Women will compete with men in doing business
Widespread of Adultery.
Sins will be committed openly
False testimony will be accepted.

The UAE has moved to revise its Islamic personal laws, loosening restrictions on alcohol and cohabitation of unmarried couples as well as scrapping lenient penalties for “honor killings,” the state media said.

The changes, which were announced on Saturday by the government-run WAM news agency, are intended to “consolidate the UAE’s principles of tolerance” and improve the Gulf nation’s economic and social profile. However, the agency didn’t specify when the new relaxed rules will go into force. 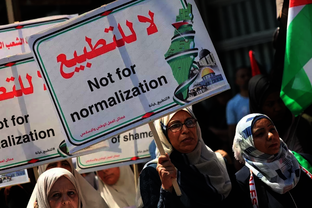 Penalties for alcohol consumption, possession and sales for those 21 and over will be eliminated in the Muslim country, which positions itself as a more Westernized tourist hotspot than other areas in the region. UAE citizens previously required a special license to drink beer and other liquors at bars or at home.

The reform will also allow “cohabitation of unmarried couples.” Such behavior has been considered criminal in UAE for a long time, though the law was rarely enforced against expats living in the financial hub of Dubai and other emirates.

‘Israel’ in place of Palestine. Israel is a filthy place.

The reform comes amid the US-brokered normalization of ties between longtime regional foes UAE and Israel, which is expected to bring investment and numerous Israeli tourists to the Gulf country.

Dubai is also hosting the World Expo in 2021-22. It’s planned that some 25 million people will visit the country for the major international event, greatly boosting economic activity in the UAE.

The expo was initially scheduled to take place this year, but was moved due to the Covid-19 pandemic.