The great majority of the Palestinian people have been dispossessed for the past seven decades, meanwhile, their properties are being used by mostly European Jews (who were victims of similar war crimes committed by anti-Semitic Europeans). Prior to being ethnically cleansed in 1948, the Palestinian people owned and operated 93% of Palestine’s lands, and contributed up to 55-60% of its national Gross Domestic Product (GDP).

[The looting] included a total of 45,000 homes and apartments, about 7,000 shops and other places of business, some 500 workshops and industrial plants, and more than 1,000 warehouses. At the same time, it was necessary to continue harvesting the crops and picking the olives, gathering the tobacco and the fruit in the orchards-a total of over 800,000 acres. (1949, The First Israelis, p. 69) 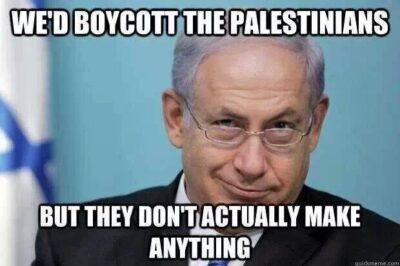 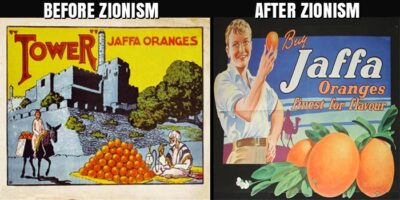 “Israel” has usurped everything that was Palestinian. To this day not one thing in Palestine belongs to them.

Amnesty InternationalFor decades Israel has pursued a policy of forced eviction(1) and demolition of homes of Palestinians living under occupation in the West Bank and Gaza Strip and the homes of Israeli Arabs in Israel.

In the past three and a half years the scale of the destruction carried out by the Israeli army in the Occupied Territories has reached an unprecedented level.

The victims are often amongst the poorest and most disadvantaged in both Israeli and Palestinian society.

Most of the houses demolished by the Israeli army in the Occupied Territories were the homes of refugee families, who were expelled by Israeli forces or who fled in the war that followed the creation of Israel in 1948.

Golda Meir, Ukrainian Jew : “all the Arab houses were empty. There were still dishes on the table.” Six million Palestinian Arabs, in the 2 wars against Palestinians were displaced.  Golda took her residence from a displaced Arab family.

More than 3,000 homes, hundreds of public buildings and private commercial properties, and vast areas of agricultural land have been destroyed by the Israeli army and security forces in Israel and the Occupied Territories in the past three and a half years.

Tens of thousands of men, women and children have been forcibly evicted from their homes and made homeless or have lost their source of livelihood.

Forced evictions and house demolitions are usually carried out without warning, often at night, and the occupants are given little or no time to leave their homes.

Sometimes they are allowed a few minutes or half an hour, too little to salvage their belongings.

Often the only warning is the rumbling of the Israeli army’s bulldozers and tanks and the inhabitants barely have time to flee as the bulldozers begin to tear down the walls of their homes.

Thousands of families have had their homes and possessions destroyed under the blades of the Israeli army’s US-made Caterpillar bulldozers.

In the wake of the demolitions men, women and children return to the ruins of their homes searching for whatever can be salvaged from under the rubble: passports or other documents, children’s schoolbooks, clothes, kitchenware or furniture which were not destroyed.

Over 80 percent of Palestinians in what became Israel in 1948 were made into refugees overnight. The process may have culminated in 1948, but it had begun in the early 20th century – and it still continues today. Southern Israel is legally Palestine resolution 242.

6 rockets were just fired from #Gaza into southern #Israel. pic.twitter.com/zIjMjHPvBH

The result is the same: families are left homeless and destitute. They must rely on relatives, friends and charity organizations for shelter and subsistence.

The destruction of Palestinian homes, agricultural land and other property in the Occupied Territories, including East Jerusalem, is inextricably linked with Israel’s long-standing policy of appropriating as much as possible of the land it occupies, notably by establishing Israeli settlements.

The establishment of Israeli settlements in the Occupied Territories violates international humanitarian law,(2) and the presence of these settlements has led to mass violations of human rights of the local Palestinian population.

The seizure and appropriation of land for Israeli settlements, bypass roads and related infrastructure and the discriminatory allocation of other vital resources, including water, have had a devastating impact on the fundamental rights of the local Palestinian population, including their rights to an adequate standard of living and to housing.

Explosive balloons were launched from #Gaza into #Israel throughout the day, igniting fires on land across southern Israel.

Israeli settlements in the West Bank and Gaza Strip have spread considerably in the past decade and in the same period the number of Israeli settlers has increased by more than 50%.(3)

With the spread of Israeli settlements and related infrastructure throughout the Occupied Territories, in order to ensure the safety and freedom of movement of Israeli settlers in the West Bank and Gaza Strip, the Israeli army has committed increasingly frequent and grave violations of the human rights of the Palestinian population.

These violations include widespread destruction of Palestinian homes, land and other properties, as a result of which thousands of Palestinians have been forcibly evicted and made homeless.

In Israel it is essentially the homes of Palestinian citizens of Israel (Israeli Arabs) which are targeted for demolition.

House demolition in the Arab sector is linked to the state’s policy of large-scale confiscation of land and to restrictive planning regulations.

Much of the land surrounding Arab towns and villages has been confiscated and the remaining Arab owned land has been mostly zoned as green land on which it is forbidden to build.

In addition, discriminatory policies in the allocation of state land have further reduced the possibilities for Israeli Arabs to obtain permits to build homes to accommodate their growing housing needs.

The resulting long-standing problem of lack of building permits in the Arab sector has led many to eventually build their homes without permits and these homes are frequently demolished.

Whereas government policies and planning regulations have curtailed the growth and development of Arab towns and villages, in the Jewish sector the policy has been to expand existing towns and villages and establish hundreds of new villages. Moreover, even though violations of planning and building regulations are also widespread in the Jewish sector, it is in the Arab sector that homes are frequently demolished.

This report analyses the main patterns and trends of forced eviction, house demolition and destruction of property by the Israeli army and security forces in Israel and the Occupied Territories in the light of international human rights and humanitarian law.

Amnesty International has campaigned against the practice of house demolition for years.(4)

The organization’s researchers have visited hundreds of sites of homes and other properties destroyed by the Israeli army and security forces, and interviewed the inhabitants, neighbours, eyewitnesses, relief workers and others.

In compiling this report the organization has drawn on information gathered in the course of its research and field work, as well as on information provided by or available from other sources.

These include the Israeli authorities, bodies, agencies and mechanisms of the United Nations, international organizations working on the ground, and Israeli and Palestinian lawyers and non-governmental organizations.

The issue of forced evictions, house demolitions and destruction of properties in Israel and the Occupied Territories is only one of the many issues on which Amnesty International campaigns.

The organization’s main concerns include:

These and other concerns are addressed in numerous reports and other material issued by Amnesty International in recent years.(5)

date, which ended when the State of Israel was proclaimed on 14 May 1948. Arab protests against a UN partition plan were followed by war between Arab and Israeli armies from which Israel emerged victorious.

More than 800,000 Palestinians were expelled or fled from Israel and became refugees in the Gaza Strip, West Bank or neighbouring countries.

Two parts of mandate Palestine remained outside Israel: the Gaza Strip, which came under Egyptian administration; and the eastern part of Palestine, which was taken over by Jordan in 1950 and became known as the West Bank.

Hostilities between Israel and Egypt, Syria and Jordan in June 1967 ended in Israel’s occupation of the West Bank (including East Jerusalem, which was annexed by Israel) and the Gaza Strip.

The Palestinians who remained in Israel after the establishment of the state became Israeli citizens but were placed under military rule until 1966.

Many became internally displaced after they were expelled or fled from their villages.

The land and properties of the Palestinians refugees and of those internally displaced by the war were confiscated.

Today more than 1,000,000 Palestinian and Bedouin citizens of Israel, known as Israeli Arabs, account for some 18% of the population of Israel.

Most of them live in northern Israel, in the Galilee and Triangle regions; about 100,000 live in towns known as mixed towns (such as Haifa, Ramle, Lod, Jaffa and Akko); and some 130-140,000 Bedouins live in the Negev in the south of the country.

In the West Bank and Gaza Strip some 3,500,000 Palestinians, more than 1,500,000 of them refugees,(6) have lived under Israeli military occupation since 1967 and some 200,000 live in East Jerusalem with a special status as permanent residents.