IDF soldier blindfolds Palestinian girl, puts her against wall, humps her and dances.

On 20 August 2020, a 15-year-old minor from Doha was arrested by Israeli occupation soldiers from his bedroom at 3:30 am. He was handcuffed, blindfolded and taken to harsh investigation.

The occupation complains about stone throwing children, but it’s not explained why armed to the teeth and often with canine IDF routinely storms Palestinians neighborhoods streets and homes. The Palestinians are not throwing stones outside their own neighborhoods.

At around 3:30 am, I was woken up by torch light shining in my face. I opened my eyes and saw about 10 Israeli soldiers in my bedroom.
The commander asked me for my name then told me to get up and put some clothes on because I was to be arrested.

When my father asked him for the reason he told my father he was going to bring me back by the end of the day.

Then the soldiers searched my room and damaged the wardrobe. They did not tell me what they were looking for.

The soldiers seemed to be in a hurry. They remained in our house for about 15 minutes.

Why are IDF soldiers here?

As soon as I was dressed the soldiers took me outside. I did not even have time to tie my shoe laces.

A soldier gave me a mask and gloves to put on due to the Corona virus and then I was handcuffed to the front with metal cuffs.

The handcuffs were very tight and left marks on my wrists.

At the entrance to the building I was blindfolded and the soldiers took me away on foot.

The soldiers made me walk quickly and I could not keep up with the blindfold on and I fell to the ground.

When I fell the soldiers started to kick and slap me all over my body.

They pulled me up in a hurry and continued to run with me towards the military jeeps. 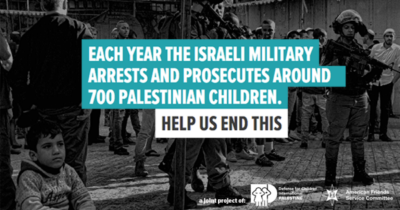 When we arrived at the jeeps I was thrown on the metal floor of one of the jeeps but later a soldier allowed me to sit on a seat.

Young men from the village started to throw stones at the jeep and the soldiers responded with tear gas, rubber bullets and stun grenades.

I was terrified. Then the jeep drove towards the District Co-ordination Office (DCO) military base where a soldier forcefully bent my knees and made me kneel on the ground.

Then he slapped me on the head and told me to keep my head down.

About 15 minutes later I was taken to the back of another jeep where I sat on the metal floor.

The jeep then drove to Atarot police station. On the way the soldiers swore at me and called my sister and mother “whores”.

One soldier struck me with the back of his gun on my elbow and caused me a lot of pain. I arrived at the police station at around 5:30 a.m.

I asked a soldier to loosen the handcuffs but he just left. I managed to pull down the blindfold by myself.

A short time later an interrogator passed by and loosened my handcuffs. He introduced himself as “interrogator Ala.” I was left in a room until around 7:00 am. Then the interrogator came back.

The interrogator told me I had the right to remain silent but warned me that remaining silent would upset the judge and would make him sentence me for a long time in prison.

He also told me I had the right to consult with a lawyer.

Then he phoned a lawyer and allowed me to speak to him. The lawyer told me to deny everything and advised me to remain silent.

I spoke to the lawyer for about two minutes on a land line in another room and the interrogator was not listening.

Then the interrogator told me he was going to give me some advice.

He told me he was going to tell me what to say so that the judge would go easy on me. 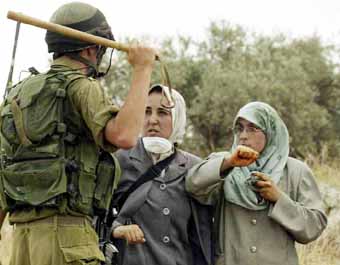 He told me he was going to give me the advice before the official interrogation started and before he turned on the camera and the voice recorder.

Then he said once he was done with the advice he was going to leave the room, then come back in as if he had never spoken to me before.

He would then turn the camera and voice recorder on and start the official interrogation.

Then he pulled out his pistol and placed it on the table in front of him and kept fiddling with it.

Then he told me I was accused of a number of accusations and that there were lots of confessions against me from people who knew me. Then he brought a thick bunch of papers and started to mark the text with a yellow marker.

When I asked him what he was doing he told me he was marking the places where my name was mentioned as having taken part in stone throwing incidents.

He was marking a lot of text and that scared me. Then he told me if I confessed the judge would give me a short time in prison; otherwise, I was going to spend a long time in prison.

About half an hour later he told me he was going to leave the room and start interrogating me properly.

He left and came back. He turned the camera and voice recorder on and introduced himself again. Then he asked me to say my name.

Then he accused me of throwing stones and pipe bombs and told me lots of other boys had testified against me. I denied the accusations.

Then he named the boys and told me he had voice recordings of their testimonies and asked me whether I wanted to listen to them.

I denied the accusations and told the interrogator I was not interested in listening to the confessions. 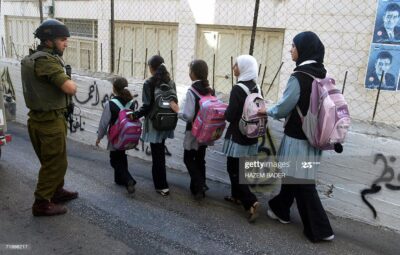 Then he accused me of lying and wanted me to confess to all the accusations if I wanted the judge to be lenient. Then he threatened me and told me the intelligence officers were waiting outside

. He told me if they got hold of me they would not release me without extracting a confession from me even if I was “99 percent innocent.” Still I denied the accusations.

He questioned me over a period of about 12 hours. He would question me for an hour or so and then leave and come back again.

Sometimes he was calm, other times he was aggressive. He slammed the door a couple of times when I denied the accusations.

Then at the end he showed me documents in Hebrew and wanted me to sign them.

Then I was taken outside where I was left for about an hour. Some soldiers approached me and told me it was in my interest to confess, otherwise they were going to send me to be interrogated by an intelligence officer who would be “harsh.”

They made it sound like they were my friends and that that they cared for me. When I did not engage with them they started to swear at me.

I was left in that outdoor area for three nights. I was not given any food and I could not sleep.

I was allowed to use the toilet once and I was given a glass of water once a day. I was shackled and handcuffed the whole time.

The whole time I was thinking and wondering what was going to happen to me. By the end of the third day I was tired and hungry and scared.

On the third day I was taken in a military jeep to another place where I was taken to a cell. I slept on a metal bench for about 30 minutes. The air conditioner was turned on very cold and I was freezing. About three hours later two soldiers came in and strip searched me.

Then I was taken to Megiddo prison where I was strip searched again. I was put into the quarantine area near the prison.

I arrived there at around 9:00 p.m. I ate and fell asleep immediately; I was exhausted.

The following day I had a military court hearing via video camera. I could see my father, a lawyer and the military judge.

When I tried to speak to my father a soldier turned the camera away and muted the sound. The hearing was adjourned.

The following day I was taken for another interrogation.

The interrogator informed me of my rights before he started to question me.

Then he phoned a lawyer and allowed me to speak to him. The lawyer told me to deny everything.

The interrogator had a voice recorder and accused me of the same accusations.

I denied everything. I was questioned for about two hours. After the interrogation I was taken back to Megiddo.

I had four military court hearings. At the last hearing, which was on the same day that I was released, my lawyer told me I was going to be released provided I apologize to the judge and promise never to be involved in illegal activities.

Luckily the line was cut off before I could apologize to the judge.

My lawyer told me I was sentenced in a plea bargain to 10 days in prison, fined NIS 3,500 and given a suspended sentence of two years in prison suspended for a period of five years.

I accepted the plea bargain because I wanted to go home after court.

I was released on 31 August 2020 and I went home with my father and uncle who were waiting for me at Al Jalama checkpoint.

I arrived home at around 1:00 .am. This was a tough experience but thankfully I was released quickly.

I want to focus on my school work because I want to study to become a Chef.