Bill Kristol Israel dual citizen neocon expert liar: We have to stop Qaddafi from slaughtering his own people 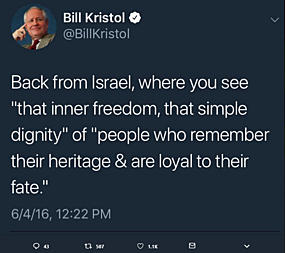 All neocons are agents of Israel: “Not to mention the fact that non-Jewish neoconservatives took the same stands on all of the issues as did their Jewish confrères” (1)

Make no mistake: the neocons are back and looking for another war. They’ve got the president’s ear. Iran? North Korea? Russia? China? Who’s next for the warmongers?-  Ron Paul

In the course of the past year, a new belief has emerged in the town: the belief in war against Iraq. That ardent faith was disseminated by a small group of 25 or 30 neoconservatives, almost all of them Jewish, almost all of them intellectuals (a partial list: Richard Perle, Paul Wolfowitz, Douglas Feith, William Kristol, Eliot Abrams, Charles Krauthammer), people who are mutual friends and cultivate one another and are convinced that political ideas are a major driving force of history.-White Man’s Burden

The Neocons still have their gun sights on Iran, even though the CIA has already told Congress that Iran has no nuclear weapons program whatsoever. The IAEA has monitored them for years, since Iran is a full signatory to the Nuclear Non-Proliferation Treaty. The IAEA has clearly told the world that Iran is not engaged in anything they do not have a legal right to do as a signatory to the NNPT. 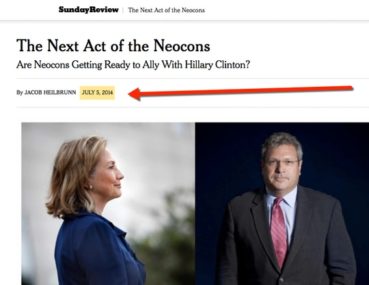 Bolton’s general neoconservative leanings have been well reported. But his recent designation of Cuba, Venezuela and Nicaragua as the “troika of tyranny” garnered comparatively little media attention. But in a speech in Miami, the day before the midterm elections, in language clearly reminiscent of Bush’s “axis of evil” coinage, Bolton made a bold promise. “The Troika of Tyranny in this Hemisphere — Cuba, Venezuela, and Nicaragua — has finally met its match,” he vowed. 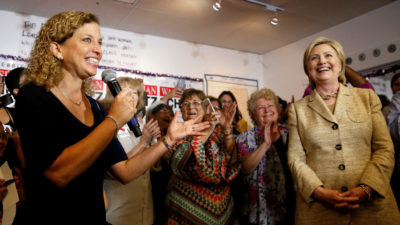 Debbie Mucarsel-Powell will be bringing humanitarian aid, Donna Shalala will stop the arming of Maduro’s thugs with batons and tear gas, while Debbie Wasserman Schultz gets arguably the hardest task of them all – taking on Russia’s President Vladimir Putin.

Like Bolton, Abrams also served in a senior role in the Bush administration. As the president’s Deputy National Security Advisor for Global Democracy Strategy, Abrams worked on “the promotion of democracy and human rights.”

But Elliot also served as an Assistant Secretary of State for Western Hemisphere Affairs during the Reagan administration where he backed military support for Nicaraguan rebels, the so-called Contras. He became enmeshed and was convicted in the so-called Iran-contra arms affair, but then pardoned by President Bush. 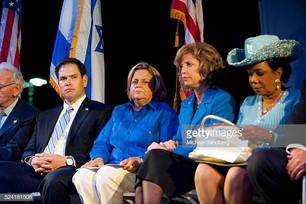 Elliot, according to a Human Rights Watch report, also played a controversial role in the 1981 El Mozote massacre in El Salvador where close to 1000 people were killed by American-trained troops. “During the Senate hearing, Assistant Secretary of State for Human Rights Elliott Abrams artfully distorted several issues in order to discredit the public accounts of the massacre,” concluded the report.

The involvement of Bolton and Abrams, who was reportedly being considered for a top State Department role early on until Trump found out that he had criticized him, is cause for concern, noted the scholars. “When you are trying to make sense of these things you have working hypotheses,” said MIT’s Posen. “And one of them is this is a kind of a little neocon project. The stars have aligned to let this neocon project come to fruition. That’s one very viable hypothesis here. But it’s not the only one.”

He added that Washington’s stance vis-à-vis Venezuela could also be designed to send to put Tehran on notice. “It is certainly not beyond Bolton to imagine a good way to get a message to Iran is to take the Venezuelans who are weaker and closer at hand and crush them to let the Iranians know you might be next and these are the tools we have.”

For O’Rourke, the emergence of Bolton and Abrams as key players and Bolton’s rhetoric has triggered a déjà vu effect. “Yes, absolutely,” she said. “Some of his language down to the “troika of tyranny” sounds awfully reminiscent of the “axis of evil”. It’s kind of surprising to me actually how similarly they have framed some of the topics and somehow the talking points are being repeated for all these different countries.”