“Russia has become the major power broker in the Middle East”

Propping up Assad was a message to the West that leaders cannot be deposed by outside force — an attempt that Putin is believed to fear the West is trying to orchestrate in Russia. The military campaign was also a way for Russia to reestablish influence in the Middle East, show off its reconstituted military might and help brand itself a resurgent great power. 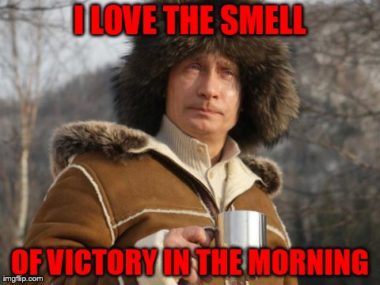 The losers are scurrying around to different places, different battles, battles they can win, perhaps.

Little by little, the partisans of the Cebrowski doctrine are advancing their pawns. If they must cease creating wars in the Greater Middle East for Israel, they’ll just turn around and inflame the Caribbean Basin. Above all, the Pentagon is planning to assassinate an elected head of state, ruin his country, and undermine the unity of Latin-America. Not cool.

“If they withdraw from Afghanistan it will not have a security impact because in the last 4 1/2 years the Afghans have been in full control,” Ghani’s spokesman, Haroon Chakhansuri, said via social media… Haha, US hasn’t won anything there…

The Tide Is Turning: Israel Is Losing on Two War Fronts.. haha

Battle Between Israel and Iran Shifting From Syria to Lebanon …Hezbollah is a big boy so I don’t think so.

The US withdrawal from Syria and Afghanistan, as well as the resignation of General Mattis, attest to the upheaval that is shaking the current world order. The United States are no longer the leaders, either on the economic or the military stage. They refuse to keep fighting for the sole interests of the transnational financiers. The alliances that they used to lead will begin to unravel, but without their erstwhile allies admitting the powerful ascension of Russia and China.

The US Air Force is condemned to defeat if it confronts the Syrian Arab Army, which now has in its possession Russian anti-air materials, the best in the world. The US’s only viable option is to leave, sparing itself any humiliation.
History is repeating itself.

Once before, in Iraq, the United States had used Kurdish combatants, promising them a State before letting them be massacred by Saddam Hussein. Today the US lets other Kurds to whom it has also promised a State, face up to Turkey alone. _ In a few months the war will be over. After eight years of fighting and tens of thousands of Islamist mercenaries being sacrificed, ZIO-Nato’s dream of destroying Syria’s state structures will have failed.

Read: Syrian war crimes study Report
States addressed in the Report as the instigators of war crimes are the imperialist states and their

collaborationists which we are used to see where there is war in the World.

A week ago, two S-300 rocket missiles were deployed in Deir Ez-zor, in East Syria. Immediately after, the intensity of the US-led coalition flights decreased by 80% in North East Syria. Since 18 September 2018, the Israeli Air Force has not carried out any more raids in Syria’s airspace.

The Israeli delegation went to Moscow because it had not succeeded in finding the gaps in the no fly zone, imposed by the new system of Syrian Defense delivered by Russia. The Israelis thought they could coax the Russians to obtain the security codes for Syrian missiles. Russia, quite clearly, refused to give these codes to them.

What are the elements of the automatized management of the Syrian air space that prevent the Israelis and Americans from acting? Syria has received 6 to 8 S-300/PMU2 missiles, with an action range of 250 km. The missiles guarantee the security of planes and Syrian military land targets. However, they are not the most important element.

Management is assured by the automatized management system, Polyana D4M1. The role of the automatized management system is a necessary interface for the Syrian air units and anti-Air Defense apparatus to work at the same time. Polyana D4M1 can cover an area of 800 km2, following 500 air targets and ballistic missiles and establishing 250 of them. It is thanks to the Polyana D4M1 that command centres of the army of the Syrian Air Force also receive external information from the Russian airplane A-50U (AWACS) and Russian satellites of surveillance.

The memory of the Polyana D4M1 computer servers stock the radar imprint of all the air targets including the cruise missiles and the allegedly “invisible” F-35 plane.

When an air target is detected by a radar in Syria, the automatized system Polyana D4M1 posts information for all the detection radars and systems for guiding planes and Syrian and Russian anti-air artillery. Once identified, the air targets are automatically assigned to be struck down. This automatized system ensures that the oldest Syrian missiles of the Soviet era (S-200, S-75, S-125, etc.) become almost as precise as the S-300 missile.

The Polyana D4M1 network also includes the following:
• the Krasukha-4 for jamming the radars on the ground
• AWACS aircrafts
• reconnaissance planes with or without pilots.

The network also uses the Zhitel R-330ZH systems for interfering with NAVSTAR (GPS), the apparatus of navigation. This equips the means of attack (planes, helicopters, cruise missiles, guided bombs, etc.).

What is the consequence of Russia implementing the automatized management of the Syrian air space?

The US military air bases in Syria consist essentially of troops for special operations. By this we mean a light infantry, without any armour or support. They could not therefore ward off any land attack carried out by the Syrian army supported by the Air Force. Having understood that the US Air Force will not be able to pass the Syrian anti-air barrage without unacceptable losses, any US intervention becomes inappropriate.

This is why the US has just announced that it will start to withdraw 2,000 soldiers from Syria [1]. At the same time, Turkey, supported by Russia, is getting ready to launch a new offensive against the YPG in Northern Syria. These new circumstances ensure the Syrian Army will fight on the side of Turkey. The YPG, trained and supported by the United States, is quickly losing all the territories that it had taken from the Islamic State which itself had taken from Syria.