Baloney about the 2-state solution. Everybody knows that was never happening, but I like Russia calling out “israel”  on the annexation. I don’t recall Russia raising a voice when it comes to Palestine matters… or so few that I missed it. Anyway,  in the long run, “israel” will be exterminated one way or another because it does not deserve to exist, and it will not be worthwhile to preserve it. 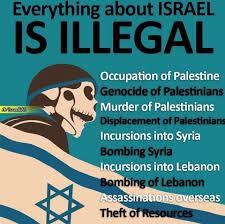 All settlements are illegal under international law.

United Nations Security Council Resolution 2334 of 2016 states that Israel’s settlement activity constitutes a “flagrant violation” of international law and has “no legal validity”. It demands that Israel stop such activity and fulfill its obligations as an occupying power under the Fourth Geneva Convention.

Russia has confirmed its rejection of Israel’s plans to annex parts of the occupied West Bank, stressing that this would undermine the settlement of the conflict on the basis of a two-state solution, and especially the establishment of an independent Palestinian state.

Russia’s Foreign Ministry spokeswoman Maria Zakharova said in a statement yesterday that Moscow and other countries that support the two-state solution share Palestinian concerns that the implementation of these plans may undermine the prospects of the establishment of an independent, viable and integrated Palestinian state.

The National Office for the Defence of Land and Resistance of Settlement in Palestine has warned that Israeli occupation authorities continue to implement their plans to annex settlements in the occupied West Bank, including in Jerusalem, and take preliminary steps to extend the occupation’s sovereignty over the Jordan Valley and the area to the north of the Dead Sea.

According to the data of the Negotiations Affairs Department of the Palestine Liberation Organisation (PLO), approximately 51.6 per cent of the occupied West Bank is under Israeli control.

There were more than 150 settlements and 128 illegal outposts in the occupied West Bank at the end of 2019 in addition to 15 illegal settlements in occupied East Jerusalem. They were home to 670,000 settlers.

All settlements are illegal under international law.

Israel’s main concern is the ability to conceal itself. Its exposure weakens it. Once exposed, Israel faces questions about its legitimacy, its methods, its purposes. Israel does not want to be held accountable. It wants absolute freedom to reproduce itself and amass power. pic.twitter.com/tcjMhpfLQb

LAGenie Retweeted · tim anderson @timand2037
5 hours ago
Compare US police state racist and inhuman tactics with those of the colonists in occupied #Palestine https://t.co/KCwXm2erNa
View on Twitter
310
0
LAGenie Retweeted · True Torah Jews @TorahJews
3 days ago
It's no news that Jews & Muslims lived in peace for 100s of years. Not only were we not enemies, but rather came together as friends.

5627
0
LAGenie Retweeted · Wayne Madsen @WMRDC
5 days ago
Memo to evangelicals: "Laying of hands doesn't mean the same to Trump as it does to you."
View on Twitter
3
0
Follow @lagenie24