The world knows it as Sderot, the Israeli city where the Hamas rockets fall. Even Barack Obama has been there. But Huj has a lot to do with this little story.

By map calculations, it lies, long destroyed, across the fields from a scruffy recreation center near the entrance to Sderot, a series of shabby villas on a little ring road where Israeli children were playing on the Shabat afternoon. 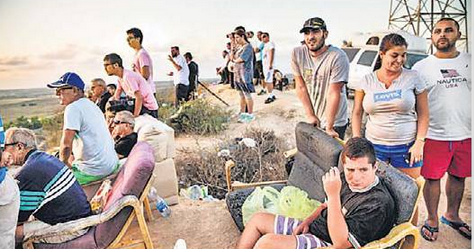 The inhabitants of Huj were all Palestinian Arab Muslims and, irony of ironies, they got on well with the Jews of Palestine. We have to thank the Israeli historian Benny Morris for uncovering their story, which is as grim as it is filled with sorrow.

Huj’s day of destiny came on 31 May 1948, when the Israeli Negev Brigade’s 7th Battalion, facing an advancing Egyptian army, arrived in the village. In Morris’s words, “the brigade expelled the villagers of Huj … to the Gaza Strip”.
Some thanks

Morris elaborates: “Huj had traditionally been friendly; in 1946, its inhabitants had hidden Haganah men from a British dragnet. In mid-December 1947, while on a visit to Gaza, the mukhtar (mayor) and his brother were shot dead by a mob that accused them of ‘collaboration’.

But at the end of May, given the proximity of the advancing Egyptian column, the Negev Brigade decided to expel the inhabitants – and then looted and blew up their houses.”

So the people of Huj had helped the Jewish Haganah army escape the British – and the thanks they got was to be sent into Gaza as refugees.

According to Morris, three months later the three headmen from the nearest Jewish kibbutzim even complained about the treatment of their former neighbours to David Ben Gurion, Israel’s first prime minister.

He wrote back: “I hope that the HQ will pay attention to what you say, and will avoid such unjust and unjustified actions in the future, and will set right these things in so far as possible with respect to the past.” But Ben Gurion did not instruct the new Israeli army to allow the villagers of Huj to return.

The following month, they pleaded to go back. The Israeli Department of Minority Affairs noted that they deserved special treatment since they had been “loyal”, but the Israeli army decided they should not go back.

So the Palestinians of Huj festered on in the Gaza strip where their descendants still live as refugees.

They shared the same fate as the people of Huj. On 12 and 13 May 1948, the Negev Brigade of the Israeli army – again, according to Morris – drove them out. They, too, were sent into exile in Gaza.

Thus did the ethnic cleansing of Palestine, as another Israeli historian, Illan Pappé, calls it bluntly, wipe from history the people who farmed the land on which Sderot would be built.
Irony

You can see Huj and Najd on Munther Khaled Abu Khader’s reproduced map of Mandate Palestine. Sderot was founded in 1951 but Asraf Simi, who arrived there in 1962 and later worked in the local library, knows nothing of this. She shrugged her shoulders when I asked about them.

“We didn’t hear anything about Arabs around here. My uncle came near the beginning, around 1955, and was living in a tent here – and we all thought this would be one of the most modern cities in Israel! I’m not frightened – but I’m not happy about the ceasefire. I think we should have gone in there to finish it all forever.”

Another irony. Asraf Simi was born in Morocco and learned Moroccan-accented Arabic before she left for Israel at the age of 17. And she does not know that today, in the squalor of Gaza, live well over 6,000 descendants of the people of Huj.

Thus does the tragedy of the Palestinian Nakba – the “catastrophe” – connect directly with the Israelis of Sderot.

That is why they cannot “finish it all forever”. Because the thousands of rockets that have fallen around them over the past 12 years come from the very place where now live the families that lived on this land.

Thus does Sderot have an intimate connection with a date that President Obama may have forgotten about when he came visiting: 1948, the year that will never go away.