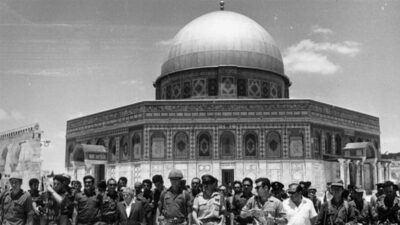 The Zionists call it a war of independence. But they never lived in Palestine ever in history. It’s “anti-semitic” to call them out on it. Everything is a mindfuck for the useful idiots who believe them.

The Palestinian activist, Hanadi Halawani, on Saturday, warned of dangerous plans targeting the holy Al-Aqsa Mosque in the coming month of Ramadan, calling for confronting those plans before it is too late.

Halawani pointed out that Al-Aqsa is in imminent danger after the calls of the so-called “Temple” groups to defile the Mosque on “Jerusalem Day” on the 28th of Ramadan.

She said that this call comes within the temporal and spatial division policy that the Israeli occupation is trying to impose on the Al-Aqsa Mosque by designating Saturday for the Jews only.

Furthermore, the Israeli occupation aims to cut off the al-Rahma Gate chapel and the eastern courtyard from Al-Aqsa and perform Jewish rituals in it. Hence, establishing the alleged “Temple”.

The so-called “Temple” groups called on youth organizations and Jewish religious schools to attend a preparatory conference “to study how to organize the storming” on the Day of Jerusalem which will fall on Monday 10/5/2021.

This conference will be held on Sunday, in western Jerusalem, and this is the first time that a preparatory conference of this size has been called for to discuss breaking into the Al-Aqsa Mosque.