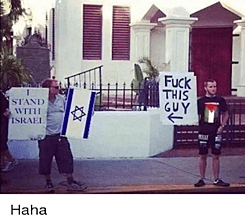 Following a major Spanish city’s vote to boycott Israel, the leader of Spain’s third-largest party called the Jewish state a “criminal country” during an interview aired by a public television broadcaster.

Pablo Iglesias Turrión, leader of the Podemos party, made the comment in an interview earlier this week on RTVE.

“We need to act more firmly on an illegal country like Israel,” said Iglesias Turrión, whose party in 2015 won 20 percent of the vote in the general election just one year after its creation.

Last week, a motion promoted by a local faction of Podemos on the City Council of Valencia, Spain’s third-largest city, was passed declaring a boycott of Israel and Valencia an “Israeli apartheid-free zone.”

Following a major Spanish city’s vote to boycott Israel, the leader of Spain’s third-largest party called the Jewish state a “criminal country” during an interview aired by a public television broadcaster.

Pablo Iglesias Turrión, leader of the Podemos  party, made the comment in an interview earlier this week on RTVE.

ACOM, a Spanish pro-Israel group, said that Iglesias Turrión’s statement reflects anti-Semitism because Podemos does not consider any other country in the world illegal but Israel.  ACOM also said that it has initiated legal proceedings against Valencia over its vote to join the Boycott, Divestment, and Sanctions movement. In recent years, ACOM actions have led to the scrapping, annulment, or suspension of 24 motions to boycott Israel by Spanish municipalities.

Last week, the Spanish Socialist Workers’ Party — which is the country’s second largest — and Podemos passed a no-confidence vote that toppled the government of the center-right Popular Party over corruption charges.

LAGenie Retweeted · True Torah Jews @TorahJews
8 hours ago
It's no news that Jews & Muslims lived in peace for 100s of years. Not only were we not enemies, but rather came together as friends.

217
0
LAGenie Retweeted · Abrar Khan @khanabrar643
8 hours ago
"We will not allow the Palestinian lands to be offered to anyone else," Turkish President Recep Tayyip Erdogan said in a video message on Twitter addressed to US Muslims.

https://t.co/ImbLxAIIDg
View on Twitter
48
0
LAGenie Retweeted · Syrian Girl 🇸🇾 @Partisangirl
8 hours ago
Imagine you're a Syrian farmer, you've spent all year painstakingly cultivating your wheat crops. Then spring comes and it's finally harvest time! Then US helicopter drop just one bomb and sets them all on fire. All the hard work to ash. How will you feed your children this year? https://t.co/V4UCoUdFlQ
View on Twitter

4621
0
LAGenie Retweeted · Wayne Madsen @WMRDC
3 days ago
Memo to evangelicals: "Laying of hands doesn't mean the same to Trump as it does to you."
View on Twitter
3
0
LAGenie Retweeted · Angie Skys 8 @AngieSkys
3 days ago
There is an interesting situation in the US. Amid all the China bashing the Department of Justice in the US has become an ally for the Saudi Arabia government against the people in the United States suing for 9/11. The US government is helping Saudi fight Americans in court😎
View on Twitter
41
0
Follow @lagenie24