My question is…with all Mae connections and deep research….how could she have missed the Zionist creep in US government and other Zionist crimes around the world? It kind of makes all the other truths a mere distraction so that we don’t look in the right places. I’ve read the argument that there wasn’t enough Zionist stuff going on in her time. That isn’t true. So I just can’t reconcile it.

How much of the current geo-political turmoil was preplanned by Dulles-Bormann-Stern Gang (Shamir/Begin), with Pres. Truman as proto-Bush National Security Act puppet? And what was the real intention behind the formation of the Jewish State by the Zionists? 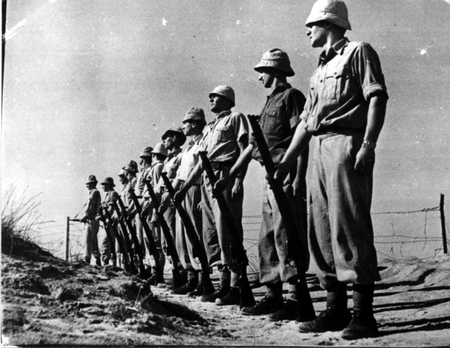 ...the revolt of the Palestinian Arab masses in 1936 made Berlin re-think the implications of their pro-Zionist policies.

Intense unrest had been aroused in October 1935 by the discovery of weapons in a cement cargo bound for Tel Aviv, and the situation became feverish in November when Shaykh Izz al-Din al-Qassam, a popular Muslim preacher, took to the hills with a guerrilla band. British troops soon killed him, but his funeral developed into a passionate demonstration.

The crisis dragged on for months before it finally exploded on the night of 15 April 1936, when a remnant of Qassam’s band stopped traffic on the Tulkarm road, robbing travellers and killing two Jews.

Two Arabs were slain in reprisal the next night. The funeral of the Jews turned into a right-wing Zionist demonstration and the crowd started marching on Arab Jaffa.

The police opened fire, four Jews were shot and, again, Arabs were attacked on the streets of Tel Aviv in retaliation.

A counter-march soon started for Tel Aviv. The revolt was on. A spontaneous general strike developed and the pressure from below forced the rival cliques within the Arab establishment to unite in an Arab Higher Committee under the leadership of the Mufti.

However, the Higher Committee feared that the continuation of the rising would put the peasantry permanently beyond its leaders’ control, and finally prevailed upon the strike committees to call off the protest on 12 October, pending the outcome of a British Royal Commission’s investigation.

Until the Arab revolt, the Nazis’ patronage of Zionism had been warm but scarcely committed, as we have seen.

However, with the political turmoil in Palestine and the appointment of the Peel Commission, the WZO saw their chance to persuade the Nazis to make a public commitment to them in Palestine itself. On 8 December 1936 a joint delegation of the Jewish Agency, the highest body of the WZO in Palestine, and the Hitachdut Olei Germania (the German Immigrants Association), went to the Jerusalem office of Doehle, the German Consul-General. The Zionist scholar, David Yisraeli, has related the incident.

They sought through Doehle to persuade the Nazi government to have its Jerusalem representative appear before the Peel Commission, and declare that Germany was interested in an increased immigration to Palestine because of its eagerness to have the Jews emigrate from Germany.

The Consul, however, rejected the proposal on the spot. His official reasons were that considerations of increased immigration from Germany would inevitably bring out the matter of the transfer which was detrimental to British exports to Palestine. [3]

Characteristically, the Zionists were more eager to extend their relationship than the Nazis, but Doehle’s rejection of their request did not stop them from further approaches.

The outcome of the Peel Commission’s expedition was thought crucial to the Zionist endeavour and it was therefore the Haganah, then the military arm of the Jewish Agency (de facto the Labour Zionist militia), that obtained Berlin’s permission to negotiate directly with the Sicherheitsdienst (SD), the Security Service of the SS.

A Haganah agent, Feivel Polkes, arrived in Berlin on 26 February 1937 and was assigned Adolf Eichmann as his negotiating partner.

Eichmann had been a protege of the pro-Zionist von Mildenstein and, like his mentor, had studied Hebrew, read Herzl and was the SD’s specialist on Zionism.

The Eichmann-Polkes conversations were recorded in a report prepared by Eichmann’s superior, Franz-Albert Six, which was found in the SS files captured by the American Army at the end of the Second World War:

Polkes is a national-Zionist He is against all Jews who are opposed to the erection of a Jewish state in Palestine. As a Haganah man he fights against Communism and all aims of Arab-British friendship … He noted that the Haganah’s goal is to reach, as soon as possible, a Jewish majority in Palestine.

Therefore he worked, as this objective required, with or against the British Intelligence Service, the Sureté Generale, with England and Italy … He declared himself willing to work for Germany in the form of providing intelligence as long as this does not oppose his own political goals.

Among other things he would support German foreign policy in the Near East. He would try to find oil sources for the German Reich without affecting British spheres of interest if the German monetary regulations were eased for Jewish emigrants to Palestine. [4]

Six definitely thought that a working alliance with the Haganah would be in the Nazis’ interest.

They still needed the latest inside information on the various Jewish boycott groups and on Jewish plots against the lives of prominent Nazis. He was eager to allow the SS to help the Zionists in return.

Pressure can be put on the Reich Representation of Jews in Germany in such a way that those Jews emigrating from Germany go exclusively to Palestine and not go to other countries.

Such measures lie entirely in the German interest and is already prepared through measures of the Gestapo. Polkes’ plans to create a Jewish majority in Palestine would be aided at the same time through these measures. [5]

Lenni Brenner
Zionism in the Age of the Dictators
Chapter 8. Palestine – The Arabs, Zionists, British and Nazis

Heinz Höhne in The Order of the Death’s Head: The Story of Hitler’s SS also writes about the proposed SS-Haganah military alliance in the mid-1930s which was considered during this (above) planned visit by Eichmann and entourage in 1937.

Zionist collaboration with fascism/Nazism in the 20th Century has been documented in extensive detail by such historians as Lenni Brenner in 51 Documents: Zionist Collaboration with the Nazis (the quintessential work on this subject) , Zionism in the Age of Dictators (also by Brenner and available online in html format) Hannah Arendt’s Eichmann in Jerusalem, Edwin Black’s The Transfer Agreement: The Dramatic Story of the Pact Between the Third Reich and Jewish Palestine, Francis R. Nicosia’s The Third Reich and the Palestine Question, Rudolf Vrba and Alan Bestic’s I Cannot Forgive, and Rafael Medoff’s The Deadening Silence: American Jews and the Holocaust.

From Lenni Brenner’s 51 Documents : Zionist Collaboration with the Nazis:

Zionist factions competed for the honor of allying to Hitler. By 1940-41, the “Stern Gang,” among them Yitzhak Shamir, later Prime Minister of Israel, presented the Nazis with the “Fundamental Features of the Proposal of the National Military Organization in Palestine (Irgun Zvai Leumi) Concerning the Solution of the Jewish Question in Europe and the Participation of the NMO in the War on the Side of Germany.”

Mae Brussell’s program number 837 (? free sample available online) makes reference to the Haganah assisting Martin Bormann’s escape to South America and subsequent liaison via ODESSA networks with Allen Dulles. How much of the current geo-political turmoil was preplanned by Dulles-Bormann-Stern Gang (Shamir/Begin), with Pres. Truman as proto-Bush National Security Act puppet? And what was the real intention behind the formation of the Jewish State by the Zionists?