The ADL and its false flag mission is an insult to all Americans, who are being bullied into accepting the suppression of their rights and censorship of their discourse.

The position of anti-Semitism monitor has not been filled by US President Donald Trump more than a year after it was vacated.

The official did not provide a timeline on when the special envoy to monitor and combat anti-Semitism would be appointed. But the tone was a pronounced change from the summer, when then-Secretary of State Rex Tillerson said the position was not necessary and the issue was best handled by other departments in the agency.

“Anti-Semitism is escalating at an alarming pace around the globe,” said the letter, highlighting the murder of a Holocaust survivor in Paris and anti-Semitism in the Labour Party in Britain that led to a protest march by Jews there. The ADL also referred to the firebombing of two synagogues in Sweden in the last year and the increase in anti-Semitic rhetoric in Poland. 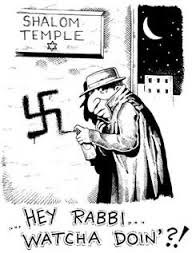 The White House and the State Department did not respond on Tuesday to a JTA query on the anti-Semitism monitor.

Congress mandated the position of special envoy for monitoring and combating anti-Semitism in 2004 with the passage of the Global Anti-Semitism Review Act. The measure directs the State Department to establish the Office to Monitor and Combat Anti-Semitism, to be headed by the special envoy.

LAGenie Retweeted · tim anderson @timand2037
4 hours ago
Compare US police state racist and inhuman tactics with those of the colonists in occupied #Palestine https://t.co/KCwXm2erNa
View on Twitter
283
0
LAGenie Retweeted · True Torah Jews @TorahJews
3 days ago
It's no news that Jews & Muslims lived in peace for 100s of years. Not only were we not enemies, but rather came together as friends.