Haaretz reported earlier Monday that Prime Minister Benjamin Netanyahu aborted last week plans for an unusual military move in the Gaza Strip, which would likely have had far-reaching implications.

He did so at the last moment due to a legal opinion by Attorney General Avichai Mendelblit that the plan required the approval of the security cabinet.

Officials involved in the matter said in response to the report that the attorney general was the one who asked the senior adviser to update election board chief, Justice Hanan Melcer, about a possible escalation.

The dramatic discussion over a potential military action began Tuesday night. A few hours earlier, Netanyahu had gone through a disturbing experience: Gaza-based Islamic Jihad operatives fired a Katyusha rocket at the southern city Ashdod, [Ashdod is occupied Palestine land, the owners are currently locked up in Gaza] where he was speaking at a campaign rally.

Some of those at the discussion had reservations about the force of a possible attack for two reasons: The possibility of sustaining collateral damage and the risk that a Palestinian response would include massive rocket fire by Hamas and Islamic Jihad that would drag the two sides toward war.

In addition, although nothing was said directly to Netanyahu, some participants were concerned that some of the prime minister’s motives were connected to the election.

The dispute continued during the following two days, as well. Mendelblit played a major role after being brought into the discussions at a later stage. He warned Netanyahu of the legal requirement to involve the security cabinet in any decision that could lead to a war.

But Netanyahu did not bring the decision to a vote before the security cabinet and in the end stopped pressing the heads of the defense establishment to act. Early Wednesday morning the army conducted a minor air raid, hitting several Hamas targets in Gaza without causing any casualties. 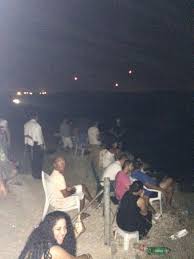 “Sderot cinema. Israelis bringing chairs 2 hilltop in sderot 2 watch latest from Gaza. Clapping when blasts are heard.” Sderot is Palestine land and the owners are locked up in Gaza.