A major network seems to be sitting on a lengthy investigation about foreign influence, and no one is up in arms about that. No, a Clintonite congressman wants to punish the network for daring to seek to expose the Israel lobby.

As everyone knows, a special counsel is investigating Russia’s influence in the last election, and as the prosecutor’s circle closes round the Trump White House, a constitutional crisis is looming…. And maybe, just maybe, Donald Trump will go down. Meantime the springs of outrage over Russian interference are refreshed daily on our media, with many a conspiracy theory, some of which are surely true.

Whatever you think of Russia’s actual influence over the 2016 election , the running sideshow to the story has been Israel’s presence in our politics. As the Russia caper unfolds breathlessly, there have also been revelations about Israel’s interference in policymaking. But of course that interference is not a scandal worthy of investigation; that interference never draws the wrath of the liberal press.

Here are three recent incidents that no one is investigating.

First, as we surmised a couple weeks back, it appears that Al Jazeera has put the brakes on an investigative documentary of the operations of the Israel lobby in the U.S. because Qatar is cultivating better relations with the U.S. establishment, or, in a word, with the Israel lobby itself. We’d all been hoping for bombshells from the documentary ala the bombshells from Al Jazeera’s undercover probe of the lobby in the U.K. But even the New York Times is now reporting on pressures to can the documentary, as Qatar and the rival Saudis each host delegations of “prominent American Jewish leaders” in an effort to win favor in U.S. policy circles.

The Times says some congresspeople are trying to punish Al Jazeera for the unaired documentary: 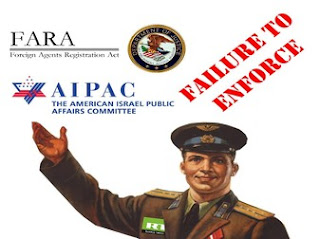 Representative Josh Gottheimer, Democrat of New Jersey, is among the lawmakers asking Attorney General Jeff Sessions to require Al Jazeera to register as a foreign agent — a designation that could limit its access to American officials and facilities. The congressional request, which has yet to be issued, follows a recent revelation that an undercover Al Jazeera reporter secretly filmed pro-Israeli organizations in Washington.

Gottheimer’s letter cites “Al Jazeera’s record of radical anti-American, anti-Semitic, and anti-Israel broadcasts,” Armin Rosen reports at Tablet; and he notes that FARA registration would be a disaster for Al Jazeera’s scores of reporters.

It should go without saying that Gottheimer is a tireless friend of Israel. Last year he undercut the Obama administration over its last-gasp abstention on the excellent anti-settlements resolution in the Security Council. Whether his devotion springs from his Jewish background or his need to raise cash in Democratic national politics is anyone’s guess.

But let’s be clear about what’s going on. A major network seems to be sitting on a lengthy investigation about foreign influence, and no one is up in arms about that. No, a Clintonite congressman wants to punish the network for daring to seek to expose the Israel lobby. And the New York Times, which chronicles every bit of evidence of Russian interference with shock, lets this pass as s.o.p. — in an article that is an unspoken testament to the power of the lobby, from its description of Alan Dershowitz and Morton Klein as Jewish leaders who flew out to the Gulf, to the chorus of Aaron David Miller, longtime peace processor, and Richard Goldberg, of the neoconservative Foundation for Defense of Democracies.

2, In the fallout over the lately-declassified Nunes memo on the origins of the Russia investigation, Democrats insist that the investigation had an honest impetus: In May 2016, Trump aide George Papadopoulos revealed to an Australian diplomat in London that the Russians had dirt on the Clinton campaign– a trove of hacked emails from the Democratic National Committee. The New York Times:

The hacking and the revelation that a member of the Trump campaign may have had inside information about it were driving factors that led the F.B.I. to open an investigation in July 2016 into Russia’s attempts to disrupt the election and whether any of President Trump’s associates conspired.

So once again the revelations from those emails, including the DNC’s alignment with the Clinton campaign and efforts against the Sanders campaign, count for nothing in our discourse.

Many of those emails document the Clinton campaign’s deference in foreign policy positioning to Israel and its advocates. Clinton took a stand against Boycott, Divestment and Sanctions (BDS) to satisfy donors, and as a counter to her support for the Iran deal. She received advice on BDS from Benjamin Netanyahu: “Israel must attack its attackers. The best defense is a good offense: ‘attack, attack, attack’”. She promised to meet with Netanyahu in her first month in office at the urging of a pro-Israel aide who had met with Netanyahu and said she needed to repair President Obama’s damage to the special relationship. She made a call to the pro-settlement Jewish leader Malcolm Hoenlein so as to distance herself from the Obama administration, resulting in a headline in the New York Times “Clinton Wants to Improve Ties to Israel.” And megadonor Haim Saban promptly thanked Clinton by citing other donors: “pls be aware that these articles will be mailed to thousands of people who are interested in the subject matter and who have been asking themselves ,,,,and me ,many times ‘Where is Hillary on this.’”

Trump was of course involved in the same game: trying to please pro-Israel donors. His love of Sheldon Adelson gave us the disgraceful Jerusalem embassy decision and let us not forget that one of the crimes of the Russia probe involves an effort by a Trump aide to interfere on behalf of Israel against the Obama administration’s foreign policy during the transition in 2016. Former national security adviser Mike Flynn has pleaded guilty to lying to the FBI about contacts with the Russians, aimed at thwarting that U.N. Security Council resolution declaring Israeli settlements a flagrant violation of international law. (The Russians didn’t play ball.)

3. Finally, there’s this item. The Department of Justice has dropped its case for corruption against New Jersey Senator Robert Menendez following a hung jury in Menendez’s trial last year. Menendez is expected to resume his place in the Senate as the top Democrat on Foreign Relations. And Menendez is right back to being a mouthpiece for Israel.

Eli Clifton suggests that maybe the fix was in between Justice and Trump’s biggest donor, Sheldon Adelson: perhaps a “quid pro quo was reached between Adelson, Trump, and Menendez in which Menendez would back Adelson’s hawkish foreign policy positions in the Senate.”

Billionaire casino mogul Sheldon Adelson and his wife Miriam each contributed the maximum allowable amount, $10,000 each, to Menendez’s legal defense fund. That’s a bit surprising considering that Sheldon and Miriam Adelson are the biggest source of funding to groups supporting Trump’s candidacy. They reportedly gave about $35 million to the Future 45 Super PAC that support Trump’s general election bid and contributed more than $80 million to help elect Republicans in 2016.

Sheldon Adelson has been clear about what he expects for his money. He pushed Trump to move the U.S. embassy to Jerusalem, lobbying Trump inside the White House and in the pages of the Las Vegas Review Journal, which the Adelsons own.

Adelson says he wishes he’d served in the Israeli army, and he’s a major player in rightwing Israeli politics. His gifts on both sides of the aisle in the U.S. remind us that there’s only one game in town on Israel policy, the pro-Israel game. Chuck Schumer leapt to his feet to cheer Trump’s Jerusalem lines in the state of the union speech. My progressive congressman says he’ll never stop supporting Israel; and BDS is anti-Semitic. While Sen. Dianne Feinstein‘s criticism of Israel is a dissenting murmur.

The interests of the two countries are held to be congruent in official circles; and the damage of this false belief to America has been endless.

LAGenie @lagenie24
11 hours ago
The 'strike' sorry (I mean accident) took out 90% of Lebanon's grain facilities which were in the port area.

Attacking the source of food of a nation or laying siege to a city whereby food is a legitimate aim and well used tactic of centuries old warfare.
View on Twitter
0
0
LAGenie Retweeted · True Torah Jews @TorahJews
12 hours ago
Israel uses Jews for their political agendas.

30
0
LAGenie Retweeted · Bint @PalBint
12 hours ago
The last time Israeli forces were present deep inside Lebanon, the massacre of thousands of Palestinians took place in the refugee camps of Sabra and Shatila.

We don't forget. https://t.co/iA3gmGLYhW
View on Twitter
122
0
LAGenie Retweeted · Cold Wind @ColdWind11
12 hours ago
Jeff Smith, particle physicist for the Los Alamos Laboratories of the DOE, a weapons designer and IAEA investigator who had worked in Israel, Syria, Lebanon, Iran, Mali and even spent 2 years in Moscow, confirms that what did this was a nuclear explosion. https://t.co/S07JKl6pKw
View on Twitter

115
0
LAGenie Retweeted · Tarqwin @TarqwinEtruscan
12 hours ago
Clear as day, the Beirut harbour blast was a missile strike. 6 seconds in you can clearly see it coming down. https://t.co/x4DwUumqfC
View on Twitter
1091
0
Follow @lagenie24