Former Air Force airmen are speaking out against America’s drone war, calling the military drone program “morally outrageous” and “one of the most devastating driving forces for terrorism and destabilization around the world.”

One CodePink protester said she hopes the week-long protest “will teach the soldiers that they must take control of and understand the consequences of their actions.”

A group of 15 peace activists on Saturday wrapped up a week-long nonviolent, socially-distanced protest at a Nevada Air Force base housing a command and control center for unmanned aerial drones.

For the 11th straight year, CodePink and Veterans for Peace led their twice-annual Shut Down Creech demonstration against killer drones at Creech Air Force Base  to “oppose the remote-control killing” orchestrated from the military facility located 45 miles northwest of Las Vegas.

CodePink organizer Toby Blomé said the activists, who hail from California, Arizona, and Nevada, “were compelled to participate and take a strong and determined stance against the illegal and inhumane remote killing by U.S. drones that occurs daily” at Creech.

Indeed, hundreds of pilots sit in air-conditioned bunkers at the base—known as the “Home of the Hunters”—staring at screens and toggling joysticks to control the more than 100 heavily armed Predator and Reaper drones that launch airstrikes in around half a dozen countries, sometimes killing civilians along with targeted Islamist militants. 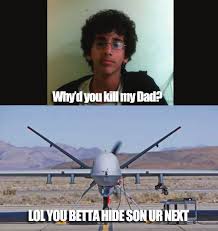 This year, the activists participated in a “soft blockade” to impede entry of the Air Force personnel who drive to work  from their homes in metro Las Vegas.

Huntington said she was “motivated to participate in this resistance, with the hope that we will teach the soldiers that they must take control of and understand the consequences of their actions.”

The activists caused a traffic jam on U.S. Route 95, the main road leading to the base, and delayed vehicles from entering for about half an hour.

They left the roadway after being threatened with arrest by Las Vegas Metropolitan Police.

Arrests were common in past years. Last year’s protest—which occurred shortly after a U.S. drone strike killed dozens of Afghan farmers—resulted in the arrest of 10 peace activists.

However, as many of the activists are elders, they did not want to risk being jailed during the Covid-19 pandemic.

The activists also placed mock coffins in the road marked with the names of countries bombed by the U.S., and read the names of some of the thousands of drone strike victims—who include hundreds of children.

Other Shut Down Creech demonstrations during the week included a solemn mock funeral procession along the highway with black clothing, white masks, and small coffins, and LED light board letters in the pre-dawn hours declaring: “NO DRONES.”